This quiz will focus on Metallica's special concert and album entitled "S&M".

Metallica and the San Francisco Symphony collaborated to perform the "S&M" live album. Metallica's main recording studio is located in San Rafael, California, a city a few miles north of San Francisco.
2. Who was the conductor in charge of the orchestra on Metallica's "S&M"?

Composer Michael Kamen (1948-2003) conducted the San Francisco Symphony's performance during the "S&M" concert. Michael Kamen composed music for numerous movies and television series. Michael Kamen passed away in 2003 after suffering a heart attack.
3. Metallica's "S&M" featured two original tracks; which of these is the name of one of those tracks?

"- Human" or "Minus Human" was the second of two original songs recorded during Metallica's "S&M" concert. This track did not receive as many accolades as "No Leaf Clover."
5. "S&M" was the final album recorded with which Metallica band member?

"S&M" was the final album recorded with bassist Jason Newsted. Newsted joined Metallica in 1986, following the death of Cliff Burton. He left Metallica in 2001 and was replaced by David Trujillo. His final song with Metallica was "I Disappear" a single written for the film "Mission: Impossible II" in 2000.
6. Which Metallica song performed for the "S&M" album won a Grammy award for Best Rock Instrumental Performance?


Answer: The Call of Ktulu

"The Call of Ktulu was originally released on the Metallica album "Ride the Lightning" in 1984. It received an orchestral remake for the "S&M" concert. It received a Grammy Award for Best Rock Instrumental Performance in 2001.
7. Metallica's "S&M" performance began with which song, originally composed by Italian composer Ennio Morricone for the film "The Good, the Bad and the Ugly"?


Answer: The Ecstacy of Gold

"The Ecstacy of Gold" was first composed by Ennio Morricone to coincide with the film "The Good, The Bad and The Ugly." Metallica usually opens concerts with a heavy metal rendition of the song. For "S&M", it also received a symphonic metal remake.
8. Metallica's "S&M" album was released on April 23, 1999, one day after the live concert was recorded.

The initials of Metallica's "S&M" album stands for Symphony and Metallica. The logo featured an S in the shape of a clef and a jagged M taken from Metallica's logo.
Source: Author RedHook13 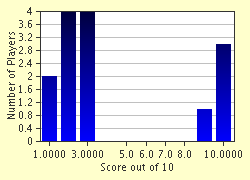 Related Quizzes
This quiz is part of series RedHook13's iPod:

Quizzes on bands compiled for FunTrivia. These bands are mostly rock and metal.