Mel B sang these lyrics, from the hit song "Too Much". She was the Spice Girl that was blamed for Geri's leave!
2. "Swing it, Shake it, Move it ..."


Answer: friendship is for

Geri Halliwell, who sang these lyrics, from "Say You'll Be There", left the band and was the first out of the fab five to become a solo singer. She had hits with "It's Raining Men" and "Bag it Up!"
4. "Make it last forever ..."

That was the chorus from "2 Become 1", which was Emma Bunton's (Baby Spice's) favourite ever Spice girl track.
6. "Catching me in places that I know I ..."

"Mama" was also one of their biggest selling singles. It was dedicated to all the girls' mums, and a few of the UK gladiators appeared in the video!
7. "Every other day I crossed the line I didn't mean to be so ..."


Answer: gotta have some fun

This was from one of my favourite singles by the Spice Girls, "Stop".
9. "Too much of something is ..."

Geri sang these lyrics, from "The Lady is a Vamp". She originally wasn't supposed to be in the band but she persuaded and begged the other members so she was let in!
Source: Author amza1 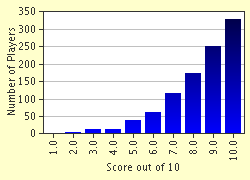 
Other Destinations
Explore Other Quizzes by amza1