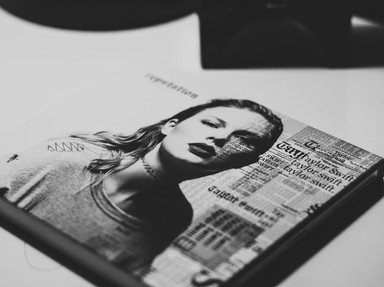 I have many quizzes on my favorite tv show, so I decided to do one on my favorite singer. It has questions from her first album to her fourth. Hope you love it!

Share on Facebook
Share on Twitter
Share by E-Mail
Author
DanceinGirl
Time
4 mins
Type
Multiple Choice
Quiz #
352,315
Updated
Dec 03 21
# Qns
10
Difficulty
Average
Avg Score
7 / 10
Plays
387
This quiz has 2 formats: you can play it as a or as shown below.
Scroll down to the bottom for the answer key.

Quiz Answer Key and Fun Facts
1. How old does Taylor Swift say you are "When somebody tells you they love you you're gonna believe them"?

Fifteen. "Cause when you're fifteen and somebody tells you they love you, you're gonna believe them." It talks about a girl starting her freshman year of high school.
2. What song has this quote? "It's a ____ _____ baby just say yes."

"Hey Stepthen I know looks can be deceivin' but I know I saw a light in you..." This song, like many other Taylor Swift songs, is a love song. It's about a guy named Stephen that she likes.
4. Taylor Swift has a song called "We Are Never Ever Getting Back Together".

It came out and immediately became a number one hit on iTunes.
5. "Once upon a time, I believe it was a _______ when I caught your eye." What day is that?

The song is called "Forever and Always". It is rumored that this song was written about Joe Jonas.
6. According to a song, Taylor Swift hates her ex boyfriend's pick-up truck.

The song is called "Picture to Burn". "I hate that stupid old pick-up truck you never let me drive..." After she saw her ex and his new girl - and his new girl was driving his truck - she wanted to "strike a match on all her wasted time".
7. What Taylor Swift song is this? "It turns out freedom ain't nothin' but missin' you wishin' I realized what I had when you were mine."


Answer: Back to December

She broke up with a guy in December and she regretted it, is what she is saying in this song. It is rumored that this song is written about Taylor Lautner.
8. What two songs on her "Speak Now" album did Taylor write about John Mayer?


Answer: The Story of Us, and Dear John

In a magazine that came out right around the time this album did, it said that "The Story of Us" was written with John in mind.
9. What comes next in the song "Stay, Stay, Stay" "I've been loving you for quite some time, time, time, you think that it's funny when I'm mad, mad, mad, but I think that it's best if __ ____ ____."


Answer: We both stay

The song "Stay, Stay, Stay" is on Taylor Swift's fourth album, "Red". The chorus says, "Stay, stay, stay, I've been loving you for quite some time, time, time, you think that it's funny when I'm mad, mad, mad, but I think that it's best if we both stay."
10. "We Are Never Ever Getting Back Together" is about Taylor Swift and some guy. Why is that Taylor never wants to get back together with him... Like ever?


Answer: Because they fight and then break up and calls her and says "I love you."

"We Are Never Ever Getting Back Together". At one point in this song she starts talking instead of singing and says that they fight then break up then later she would get a call from him saying "I love you" and this time she is telling him that they are never ever getting back together... Like ever. "He calls me up and he's like I still love you. And I'm like, I'm just, I mean this is exhausting, you know? We are never getting back together, like ever."
Source: Author DanceinGirl 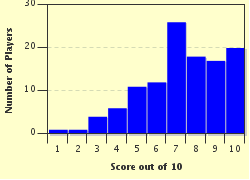 
Other Destinations
Explore Other Quizzes by DanceinGirl