An Atheist In the Foxhole Trivia Quiz

They say there are no atheists in foxholes. But if I were in a foxhole, I would be more than happy to have one of these atheists with me.

Quiz Answer Key and Fun Facts
1. In "All Quiet on the Western Front," Paul Bäumer finds himself in a bomb crater with an enemy soldier. If an enemy found his way to my foxhole, I would like to have a martial arts expert sharing that foxhole with me. Which of these actors, star of "Fist of Fury" and "Enter the Dragon," would fill the bill?

In 1972, according to biographer John Little, Lee was asked if he believed in God, to which he said, "I really do not." Although both Bruce Lee and Jackie Chan are of Hong Kong ancestry, Chan was born there in 1954, while Lee was born in San Francisco's Chinatown in 1940.
2. Time spent in a foxhole has got to be pretty tense, as well as intense. Who would be a better companion than a nationally-recognized wit, satirist, and insightful commentator on society in all its facets, a sort of Leonardo of humor. Our next candidate, born in 1937, had a "There Is No God" routine and said he worshiped the sun because he could see it. Which of the following is he?

In 2008, the year of his death, Carlin was awarded the Mark Twain Prize for American Humor. He was the first to win the award posthumously. Whereas Carlin often criticized religion, God, and followers of religion, all three of the incorrect choices were Jewish comics.
3. Who would be better to share a foxhole with than a decorated war hero? Our next atheist, born in a kibbutz, helped lead his nation to victory in wars against the combined forces of all his country's surrounding neighbors. Who was this hero who was awarded the Legion of Honor for his military exploits, and was famous for his eye patch?

Both Tariq Ali in 2003 and Giulio Meotti in 2011, writing about Israel's recent history, described David Ben-Gurion and Moshe Dyan as atheists. Following his military career, Dayan served the Israeli government as Minister of Defense for seven years and Minister of Foreign Affairs for two. Dayan died in 1981.
4. Being a red-blooded American male, I certainly would not object to having a woman soldier be in my foxhole, especially if she is an angel. Being a sultry songstress would not be a hindrance, either. Our next atheist gained early stardom as Lola-Lola in the 1930 German classic, "The Blue Angel." And I have her singing "Lili Marleen" in my iTunes library. Who is this star whom the American Film Institute placed at number 9 on their list of Greatest Female Stars of All Time?

Dietrich was born in Berlin in 1901. Her experience touring with USO shows during World War II caused her to fall away from the Lutheran teachings of her childhood. She is reported to have said, "I lost my faith during the war." and "If God exists, he needs to review his plan." However, during the final years of her life she converted to Roman Catholicism, and she had a Catholic funeral in Paris.

She lived from 1915 to 1982. West was born in Brooklyn in 1893 and died in 1980.
5. If you're sharing your foxhole, you couldn't do much better than to share it with someone who could inspire you to your finest hour in your time of direst need. This next atheist was one of the greatest actors of all time. Just watch him in "The Robe," for which he earned an Oscar nomination. Or watch him inspire his troops in "Alexander the Great." I mean, they conquered the world, didn't they? Who was this Welsh acting legend?

OK, I may have exaggerated Sir Richard's acting ability, since he never won an Oscar, but he did get seven nominations. He did inspire Elizabeth Taylor, however, as he married her twice in succession, among his five trips down the aisle. Born Richard Walter Jenkins in Wales in 1925, he had a dozen siblings, of whom eleven were older.

He is quoted as saying, "I simply cannot" believe in God.
6. Another icon, this English entertainer would almost certainly fill up our two-man foxhole by himself. But I'd love to have him there, despite his drug use. I mean, if the Hell's Angels couldn't off him, I think he'd keep me safe beside him. Besides, he's a knight. Who is this famous (some might say infamous) singer?

Sir Mick is the only Englishman listed as a choice. While he appears on a "Most Famous Atheists" list by Rant Lifestyle posted on January 1, 2014, about a dozen other lists of atheist entertainers or musicians I've searched omit him. Nonetheless, the fact that Hell's Angels tried to assassinate Jagger and failed is pretty impressive to me.

However, after reading "The God Delusion" by Richard Dawkins, Jagger said, "I'm more in awe of the universe and that's not really a belief in God," which led Tom Kershaw to describe Jagger as "a Buddhist atheist."
7. Still looking for humor in my foxhole-mate, I also still want a motivator. This screaming and irreverent comedian would be perfect. Who is this funny man famous for his black humor and high-pitched voice who said, "I retired from acting the same time they quit hiring me"?

Comedy Central rated Bobcat as the 61st greatest comedian of all time. Is that good or bad? He said that blaming the President for what's wrong in the country is like blaming Ronald McDonald for a bad cheeseburger. In a 1994 interview with Bobcat, Katie Couric kept asking him to calm down, and during a subsequent commercial, she asked her staff why no one had told her that "he talked like that." That's the Bobcat!
8. Time for one more beautiful woman for my foxhole. Winner of four Best Actress Oscars, she proved her mettle on an African lake, saving Humphrey Bogart from the Germans in World War I. Named the greatest female movie star in Hollywood history by the American Film Institute, who is this feisty babe and veteran of 60 years of movies?

The bit about Hepburn and Bogie in World War I is, of course, from their 1951 classic, "The African Queen." Always an independent thinker who refused to be confined by society's expectations for women, Katherine stated in 1991, "I'm an atheist, and that's it." Her strength of character and trust in her own mind would make her a perfect partner in a foxhole.
9. Since a foxhole is a defensive position, why not have the world's greatest defense lawyer at my side? Famous for defending John Scopes and evolution in the "Monkey Trial" and for defending Leopold and Loeb, which of the following will be in that foxhole with me?

Darrow's 1925 confrontation with William Jennings Bryan at the Scopes Trial in Dayton, Tennessee, was actually focused on evolution versus creationism and science versus the Bible. While perhaps not technically an atheist (He is quoted as saying, "I do not consider it an insult, but rather a compliment to be called an agnostic."), I have included him in this quiz. I'm sure that if there are agnostics in foxholes, they must surely be leaning toward belief rather than non-belief, depending on how dire their situation is.

The above quote is from the "United States History" website (u-s-history.com) article on Darrow. Wikipedia lists him on their "List of atheists in politics and law."
10. Well, since our foxhole is an imaginary one, my last atheist comes from the world of fiction, as well. If one's greatest hope in a foxhole would be getting safely out of it, my next partner would be perfect, especially if he has the TARDIS with him. It is not surprising that he's an atheist, since he is from the planet Gallifrey. Who is this companion?

A staple of British television since 1963, "Doctor Who" is a weekly "programme," as they say across the pond, featuring the adventures of a Time Lord who seeks to protect Earthlings from Daleks, Cybermen, and other intergalactic dangers. William Hartnell was the actor who first played The Doctor on the BBC.

As of 2014, there have been a dozen Doctor Who's, with Peter Capaldi taking over the role in 2013. There have also been a few guest appearances as other incarnations of Doctor Who, or other Time Lords.

The TARDIS, appearing as a British police box, is The Doctor's vehicle for travel through time and space, as well as an office.
Source: Author shvdotr 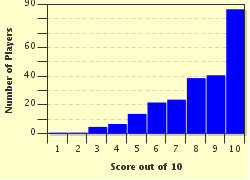 A baker's dozen of my easier quizzes.