Before They Were Infamous Trivia Quiz

Accepting my first title challenge led me, guns blazing, researching the most "infamous" bank robbers and cons in American history.

Quiz Answer Key and Fun Facts
1. Mamma Mia! Born Arizona Clark in 1873, this grand dame of a criminal family spent more time in a shadowy theater than participating in her progeny's crime spree. Nevertheless, she was the support system keeping the kids active and out of jail, even to her dying breath, Tommy gun in hand.

Kate "Ma" Barker was killed by multiple gunshots after a shootout with the FBI in Florida on January 16, 1935. At the time of her death, Ma was assisting in shielding her son, Fred, from capture. Both mother and son were killed in the shootout.
2. A shot of whiskey went down smooth as I squashed a bug and researched my next suspect. Born Adelard Cunin in 1891, this gentleman likely never worked an honest day in his life. He's more famous for inventing "drive-by shootings" and outrunning the law until they caught up with him on November 8, 1956. He lived out the rest of his years incarcerated in Leavenworth Penitentiary.

George Moran, aka "Bugs" Moran,was a Chicago prohibition-era gangster that feuded often with another famous gangster, Al Capone. His last known criminal act was a bank robbery for which he was sentenced to ten years in prison. Little to be known, he wouldn't serve much time as he died a little over a month later of lung cancer.
3. Locked my keys in my car, tried to jimmy the lock, but failed. Too bad this gangster was already dead, he probably would have helped this baby face out. Born in 1908, bad luck kick-started a criminal career that would make him a "public enemy". At age 12, he was playing with a gun and accidentally shot another child. The kid survived, but this perpetual child was sent to prison for a year. Upon his release, he embraced the bootlegging and armed robbery industry that became his infamous claim to fame. His young life ended in a shootout at Barrington's North Side Park in Illinois.

Lester Gillis, aka "George 'Baby Face' Nelson" actually sought trouble throughout his short life. In addition to rum running and bank robbing, he hated the police and intentionally targeted police officers for target practice. It was this hatred of the law that ultimately ended his life when he recognized an officer and started a high speed chase where he was the pursuer.

The tide turned against him, and he fled with some of his gang members and his wife before they were trapped at Barrington's North Side Park. Gillis died November 27, 1934, he was only twenty-five.
4. I enjoyed some cookies and milk reading up on my next bandit. Born in 1866, he was one of a baker's dozen of siblings, growing up on a ranch with his Mormon parents. Eventually, he left home and went to work on a dairy farm and then later as a butcher. His path to crime and infamy started slowly, dabbling in stolen horses and small-time theft. But his criminal activity quickly ramped up as his gang grew, and soon he was robbing banks and trains with the best of them. The gang's unusual claim to fame was that they rarely, if ever, killed anyone during the commission of their crimes.

Robert "Butch Cassidy" Parker and his legendary Wild Bunch gang (which included Harry Longabaugh, aka "The Sundance Kid") allegedly fled to South America to evade capture. The exact date of Cassidy's death is uncertain. One story was that he was gunned down in a battle with the Bolivian militia in 1908.

Another story is that he gave up his life of crime and became a productive member of society, even becoming a Mason, eventually dying of natural causes in 1936.
5. It was time to get all dolled up for the evening, once inspired by my next infamous figure. Born in 1904 in Georgia, he was possibly a victim of his Depression-era circumstances, turning to crime for mere survival. "Pretty" early criminal actions included robbing a post office, but quickly escalated to banks. He was blamed for what was known as the "Kansas City Massacre," an event ending in the deaths of four police officers. He denied involvement. He was eventually captured and killed in Ohio.

Charles "Pretty Boy" Floyd was shot and killed on October 22, 1934. He was given the nickname "Pretty Boy" after a robbery where witnesses to the crime tried to describe his boyish appeal. It was a nickname he hated.
6. In a daze, I did some work on our next infamous gangster, perhaps the most infamous of all. I perhaps didn't work as hard as he did, as a machinist in Indianapolis. A few scrapes with the law saw him off to the U.S. Navy where he served aboard the U.S.S. Utah, deserting after a short while. Unable to hold down a job, he turned to crime and was briefly incarcerated where he was mentored by hardened criminals. From there, his crimes escalated to successful bank robberies, allegedly taking in a whopping $300,000, and becoming the object of J. Edgar Hoover's attention.

He died on the sidewalk. Upon his death, "Pretty Boy" Floyd took over the title of Public Enemy Number One.
7. My heart was all a flutter mooning over photos of this next infamous outlaw. Born in 1847, the younger of outlaw brothers was the son of a hemp farmer and Baptist preacher. In his 20s, he did his part for the Confederacy during the American Civil War. Eventually, he married his first cousin, Zerelda Mimms. She apparently chose to ignore her husband's choice of careers, plundering banks and stage coaches while dressed like Ku Klux Klan members.

On April 3, 1882, Jesse James was murdered by one of his own gang members, Robert Ford. Ford was hiding James in his home while the trouble he caused died down, but shot James in the back of the head. It was soon discovered that Ford was negotiating with Missouri Governor Thomas T. Crittenden in order to obtain the large reward on James' head.
8. "Momma had a baby and his head popped off," played through my mind reading about this next outlaw. He and his brother, Sam, robbed trains of payrolls in between cowboy gigs. Eventually, they joined the infamous Hole-in-the-Wall gang continuing their bandit ways. A failed August 16, 1899 train hold-up ended in his capture and the loss of his arm. Despite there never being a previous instance of capital punishment in the New Mexico territories, the cards weren't in his favor and he was hanged on April 26, 1901.

The official stories of Thomas "Black Jack" Ketchum's execution reported that due to his height and weight, and the rope being too long, Ketchum's head popped off as he was dropped. They sewed it back on to put his corpse on public exhibition, a warning to other outlaws still roaming the range.
9. After I was inspired by "Cosmopolitan" magazine's article on the homeless and needy, I did some reading on my infamous individual. An heiress and socialite, she grew up in San Francisco where she attended Crystal Springs School for Girls. After her matriculation, she was kidnapped from the apartment of her fiance and held for ransom. During her captivity, she aided her captors in a bank robbery.

Patricia "Patty" Hearst was the daughter of millionaire magazine magnate, Randolph Hearst. She was kidnapped by the Symbionese Liberation Army in their attempt to have some of their own freed from prison. When that did not work, they demanded a massive ransom that involved feeding California's homeless.

Hearst's kidnapping was traumatic, and she exhibited signs of Stockholm Syndrome which caused her to sympathize with her captors. She aided in a bank robbery, was arrested, and incarcerated for her crime.

After two years, she was released and pardoned.
10. A talented writer and dedicated student, our last vixen slung coffee and sandwiches in Texas before she turned her talents toward crime. Despite her media portrayal, she was largely a poser who didn't actually do much lead slinging. In the end, she died where she would have wanted to be, at the side of a man she wasn't married to in this life.

Bonnie Parker died at the side of her soul-mate in life, Clyde Barrow, on May 23, 1934, in a stolen car. The two were ambushed in a shootout in Louisiana by a posse consisting of police officers from Texas and Louisiana.
Source: Author TemptressToo 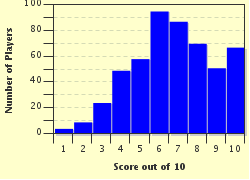 Related Quizzes
This quiz is part of series Give Me History:

This is a quiz list of specialized history. Enjoy!


Other Destinations
Explore Other Quizzes by TemptressToo