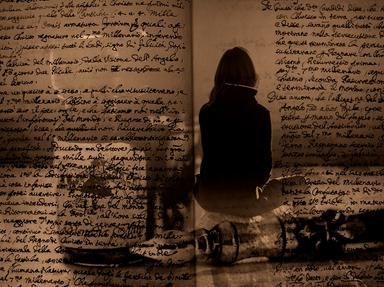 Haven't you ever wondered where American poets such as Frost, Hughes, and Ezra Pound were born?

Quiz Answer Key and Fun Facts
1. This St. Louis born American poet is claimed also by the British as a poet. This person wrote one odd little poem about some "love song". Who was this poet?

The "love song" I referred to in the question is "The Love Song of J. Alfred Prufrock".
2. This poet hails from Reading, Pennsylvania. He wrote such poems as "The Anecdote of the Jar" and "The Emperor of Ice-Cream". Who was this poet?

Wallace Stevens wrote a wonderful poem called "Sunday Morning". It's probably my favorite of his works.
3. This poet created a type of poem which might drive grammar mavens over the edge. He was born in Cambridge, Massachusetts. Who was this poet?

e.e. cummings' (yes, he liked to spell his name like that) poems are interesting yet hard to understand at times because of the lack of any punctuation and very odd word choices in his poetry.
4. Robert Frost was born in California.

It was a little tricky but it's actually true. He was born in California and only moved to New England when he was 11 years old.
5. This midwestern born poet came to be considered the "head" of the Harlem Renaissance movement. Who was this poet?

Hughes is easily considered the most famous poet of the Harlem Renaissance with poems such as "Dream Deferred", "I, Too", and, my favorite, "Mother to Son".
6. The creator of this line from a famous poem, "I saw the best minds of my generation destroyed by madness", was born in Newark, New Jersey. Who is this poet?

Ginsberg was considered the Beat Generations most eloquent and persistent spokesperson.
7. This author of a poem about a red wheelbarrow was born in Rutherford, New Jersey. He was also the author of works about a town in New Jersey called "Paterson". Who was this poet?

I love "The Little Red Wheelbarrow" by Williams. I think his poetry is some of the better poetry in the early 20th century.
8. Hilda Doolittle was born in the Pennsylvania town which has the same name as Jesus Christ's birthplace. Where is it?

H.D. wrote a nice little poem called "Helen" about Helen of Troy.
9. This poet who wrote "Annabel Lee" was born in Richmond, Virginia in 1809. Who is it?

Poe is an earlier American poet born in 1809. Other early American poets are Whitman and Emerson.
10. "We Real Cool" author, Gwendolyn Brooks was born in this Kansas state capital. What is it?

Brooks is a late poet of the 20th century, like Ginsberg. "We Real Cool" is one of Brooks' more famous poems.
Source: Author jaknife1200

This quiz was reviewed by FunTrivia editor fringe before going online.
Any errors found in FunTrivia content are routinely corrected through our feedback system.
Related Quizzes
1. Poets Laureate of the United Kingdom Easier
2. Tales of the Grand Tour 3 Average
3. Gently Its Touch: Great Modern Poets Average
4. Poets From Around The Globe Average
5. Poet's Corner Average
6. US Poets Laureate Average
7. Name the Poet! Average
8. William McGonagall, "The World's Worst Poet" Average
9. Poets for All Seasons Average
10. Life and Works of the Kobzar Average
11. Scandalous (and other ) Poets and Their Poems Average
12. The Fascinating Lives of Poets Average


Other Destinations
Explore Other Quizzes by jaknife1200