See if you know the surnames of these famously first-named figures!

Quiz Answer Key and Fun Facts
1. What was the surname of the brilliant 2nd- and 3rd-century BCE Carthaginian general, Hannibal, who led the empire of Carthage against the Roman Republic in the Second Punic War, coming close to defeating Rome until his defeat at the Battle of Zama?

Hannibal's father was Hamilcar Barca. Hannibal is famous for his use of elephants in battle and his feat of successfully driving his army, elephants and all, across the Alps in 218 BCE in order to reach Rome. He is widely considered to be one of the greatest military commanders of all time. Agrippa and Germanicus are Roman names, and Scipio Africanus is the Roman general who finally defeated Hannibal.
2. What is the surname of the legendary (though possibly factually based) British king Arthur, who is famed for his chivalrous kingdom, Knights of the Round Table, and sword Excalibur?

Arthur's father is Uther Pendragon, a British king. Lancelot du Lac is one of Arthur's greatest knights. Avalon is the legendary place to which Arthur permanently moved at the end of his life in order to recover from the fatal wounds that he received at the Battle of Camlann.

In the 15th-century, Sir Thomas Malory wrote "Le Morte d'Arthur," one of history's most famous and influential collections of Arthurian legends.
3. What was the surname of the celebrated 13th- and 14th-century Italian poet of the Middle Ages, Dante, who wrote the "Divine Comedy," an epic poem widely regarded as one of the world's greatest works of literature?

Dante's "Divine Comedy" includes three parts ("Inferno," "Purgatorio," and "Paradiso") and includes the now-famous motif of the "nine circles of Hell." Boccaccio, Castiglione, and Machiavelli are the surnames of famed Italian Renaissance writers (Giovanni, Baldassare, and Niccolň, respectively).
4. What was the surname of the renowned 15th- and 16th-century Italian Renaissance artist Michelangelo, who painted the Sistine Chapel and sculpted the statue "David?"

Michelangelo's other famous works include the massive wall fresco "The Last Judgment," the religious sculpture "La Pietŕ," and the statue of Moses on the tomb of Pope Julius II. Botticelli, da Vinci, and del Verrocchio are the surnames of other great Italian Renaissance artists (Sandro, Leonardo, and Andrea, respectively).
5. What was the surname of the eminent 16th- and 17th-century Italian scientist Galileo, who made great strides in physics, astronomy, and mathematics, among other subjects?

Galileo was one of the most influential figures of the Scientific Revolution and has since been considered by many people (including Albert Einstein and Stephen Hawking) to be the figurative father of modern science. Copernicus, Kepler, and Newton are the surnames of other important Scientific Revolution scientists (Nicolaus, Johannes, and Isaac, respectively).
6. What was the surname of the famous 20th-century Mexican female painter Frida, whose works are known for their raw, symbolic portrayals of emotional pain?

Frida had a tumultuous relationship with, and twice married, world-famous Mexican mural painter Diego Rivera. She was largely known only as Rivera's wife until her work began to be vastly more appreciated as a part of Mexican culture in the late 20th century. Orozco, Siqueiros, and Tamayo are the surnames of other great Mexican painters (José Clemente, David Alfaro, and Rufino, respectively).
7. What was the given name of the highly influential 20th-century Chinese revolutionary and Communist leader Mao, who established the People's Republic of China in 1949 and led it until his death in 1976? (Note: In the Chinese language, the positions of given names and family names are inverted in comparison to their orientations in Western culture; Mao is, in reality, this person's family name, but the way that his full name is referred to in the West makes it seem like it is his first name. This question, therefore, strays slightly from this quiz's theme)

Mao's legacy is controversial, especially in the capitalistic West. He is held in high regard by many Chinese people today, however, as a great leader who helped to usher in an economically and culturally strong modern China. His name can also be spelled "Tse-tung." Kai-shek, Xiaoping, and Yat-sen are the given names of other important political leaders in 20th-century China (their family names are Chiang, Deng, and Sun respectively).
8. What is the surname of the popular, blonde-haired, blue-eyed, impossibly proportioned 20th- and 21st-century American doll Barbie, which has been manufactured by Mattel, Inc., since 1959?

Over the decades since Barbie's debut, the ubiquitous girly plaything has been subject to many controversies (Oreo Fun Barbie, anyone?) and parodies. The pop group Aqua triumphed over Mattel's lawsuit against it when the court said that the group's 1997 hit song "Barbie Girl" is protected as free speech under the United States of America's First Amendment. Ruth Handler came up with the idea for the Barbie doll; Ken Carson is Barbie's ever-loyal boyfriend (except during a Mattel-sanctioned breakup from 2004-2006); and Millicent is Barbie's middle name.
9. What was the surname of the internationally beloved 20th-century English Princess of Wales, Diana, who married (and later divorced) Prince Charles and bore Princes William and Harry?

Diana and her lover Dodi Fayed died after a car crash on August 31, 1997, and the Princess was greatly mourned by a large portion of the world. Her televised funeral attracted around 2.5 billion viewers worldwide. Wessex, Tudor, and Stuart are the names of royal houses that have previously held the English throne.
10. What is the surname of the chart-topping 21st-century American R&B singer and actress, Beyoncé, who is known for her powerful vocals and impressive stage presence?

Some of Beyoncé's hit songs include "Crazy in Love," "Irreplaceable," and "Single Ladies (Put a Ring on It)". She has also acted in movies such as "Austin Powers in Goldmember," "Dreamgirls," and "Obsessed." Carey, Hudson, and Spears are the surnames of other modern popular singers (Mariah, Jennifer, and Britney, respectively).
Source: Author greenstupor 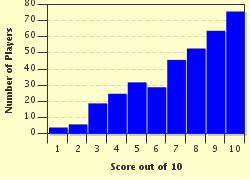 
Other Destinations
Explore Other Quizzes by greenstupor