The first names of all modern era people mentioned in this name game coincide with those of the 48 prophets or 7 prophetesses of Judaism. Can you correctly match the person with the description given? Good luck!

Share on Facebook
Share on Twitter
Share by E-Mail
Author
gentlegiant17
Time
4 mins
Type
Multiple Choice
Quiz #
301,160
Updated
Dec 03 21
# Qns
10
Difficulty
Average
Avg Score
7 / 10
Plays
1340
Awards
Top 20% Quiz
This quiz has 2 formats: you can play it as a or as shown below.
Scroll down to the bottom for the answer key.

Quiz Answer Key and Fun Facts
1. Which of the following is an NBA hall of famer who retired with one championship ring, wore jersey number 2 for many years and was a 3-time NBA MVP?

While all the players listed share their names with a prophet of Judaism, Moses is the cardinal one. For more information on the prophets, please refer to http://www.jewfaq.org/prophet.htm
2. From here to eternity, she was one of the silver screen's finest actresses, possibly best known for playing Anna Leonowens. My "affair to remember" with her started upon watching Powell and Pressburger's "Black Narcissus". Heaven knows, you are now in a position to tell me: who was she?


Answer: Walked on the moon

Col. David Scott commanded the Apollo 15 mission (1971) and was the seventh moon-walker and first moon-driver of the lunar rover (Rover-1). Only two astronauts but Scott both orbited the Earth and took part in lunar Apollo Missions.

While considered the major king of the people of Israel, David is indeed also listed as a Judaic prophet.
4. A few US First Ladies shared their names with prophetesses. Which of the following names did NOT belong to a US president's wife?

Huldah (not to be confused with the Scandinavian given name Hulda) is one of seven prophetesses. However, her name was not adopted in the English-speaking countries, unlike the others. Actually, the name even vanished from the Hebrew list. Could it have something to do with the fact that in modern Hebrew "Huldah" means "rat"?
5. He started acting in Hollywood aged 8 and is best known to date for his major role in a certain trilogy (2001-2003). Who is this actor?

Occasionally, his younger sister also shares her name with a prophetess - Hannah (Samuel's mother).
6. Selected works by Miriam Makeba include "Pata Pata", "Welela" and "All About Miriam". Who was she?

Also known as "Mama Afrika", Miriam Makeba was a prominent anti-apartheid figure. Due to her activities, she lived in forced exile (1959-1990) until called back to South Africa by Nelson Mandela. She kept recording and performing till her death in Italy on November 2008 (aged 76) which was caused by a heart failure minutes after performing "Pata Pata".
7. Who is the doctor who paved the way to saving millions of lives by developing the first vaccine against polio?

Jonas Edward Salk (1914-1995) was the son of Jewish Russian immigrants to the US. His name is a derivative of Jonah, the Biblical prophet. In 1952, he was the first to complete the implementation the Nobel prize winning discovery of Enders, Weller and Robbins by producing and testing (also on himself and his family) a vaccine consisting of dead polio virus which came to be named after him. At its time, the public test for the Salk vaccine (USA, 1954-5) was the grandest medical experiment performed by mankind.
8. During the US presidential campaign of 2008, a controversy related to Senator Barack Obama's pastor broke out. As the affair evolved, Obama was drawn to publicly resign his membership with that pastor's church. Who is this pastor?

Barack Obama was close to Jeremiah Wright, who even conducted his marriage and baptized his daughters. "The Jeremiah Wright Controversy" was a hot topic between March and May of 2008. The sermons, "The Day of Jerusalem's Fall" delivered shortly after the 9/11 attacks and "Confusing God and Government" delivered in April 2003, carried extreme tones and Obama's close association with Wright was scrutinized. During the public debate Wright even escalated his hard line and Obama finally cut off relations with him at the end of May 2008.

The Biblical Jeremiah is considered one of the gravest "prophets of wrath" and his prophecies on the upcoming fall of Jerusalem (to Babylon) are among the harshest recorded in the Bible.
9. Which pop diva asked to be called "Esther" as part of her spiritual journey into Jewish Kabbalah?

A name change is one of the steps facilitated in Judaism when a person undergoes a major physical change (e.g. a very sick person may change his name) or a major spiritual change (e.g. Avram renamed to Avraham). I wonder how you categorize Madonna?
10. In 1996, Frances McDormand won the Oscar for Best Actress for her magnificent role in "Fargo" by the Coen brothers. Which one of the brothers is she married to?

Frances McDormand and Joel Coen have been married since 1984 and have an adopted child. As of 2008, they have worked together in a total of six films. Here's a favourite quote by Frances McDormand on Joel Coen: "Can I say that, even though he's 49, my husband idolises Dylan?" ("Uncut Magazine", 2004).

This one was easy if you're a Coen brothers enthusiast, as well as a bonus for Bible savvies, since Joel is one of the prophets while Ethan is not. Otherwise, I hope you fell on the right side of the 50% toss. Thank you for playing!
Source: Author gentlegiant17

This quiz was reviewed by FunTrivia editor bloomsby before going online.
Any errors found in FunTrivia content are routinely corrected through our feedback system.
Most Recent Scores
Jan 25 2023 : Guest 98: 6/10
Dec 12 2022 : Hayes1953: 6/10 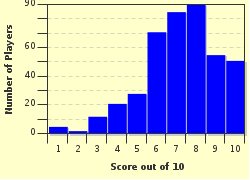 
Other Destinations
Explore Other Quizzes by gentlegiant17