Gone Too Soon, Yet Not Forgotten Quiz

Ten well known people from different walks of life who may have died young but still managed to leave their mark.

Quiz Answer Key and Fun Facts
1. The subject of a famous musical, Eva Peron, was an actress who rose to prominence after marrying Colonel Juan Peron in 1945. In the following year, the colonel was elected the president of his country leading to Eva assuming various roles in the government and championing causes like labour rights and women's suffrage. Which South American country was Eva the First Lady of until her death at the young age of 33 in 1952?

The second wife of Juan Peron, Eva was not content with just being an 'ornamental' First Lady. She held the offices of Minister of Labour and Health while also pursuing other causes close to her heart including women's suffrage. In 1951, she sought a greater role in running the administration of her country by announcing her decision to campaign for the post of Vice President.

Unfortunately, she was also battling cancer at the same time and further deterioration in her health forced her to withdraw from the elections.

A year later, she succumbed to the disease. Shortly before her death, she was given the title of 'Spiritual Leader of the Nation'.
2. Which Irish author and poet, admired for his wit, was tried and imprisoned for homosexual acts and lived the last years of his life in exile before dying at the early age of 46?

Born in Dublin and having studied at Oxford, Wilde was one of the leading figures of the literary scene. His one and only novel, "The Picture of Dorian Grey" was well received, as were his plays, famous among them being "The Importance of Being Earnest".

Unfortunately, his private prosecution of the Marquess of Queensberry for libel backfired. The Marquess was the father of Wilde's lover, Lord Alfred Douglas and to avoid being convicted himself managed to gather evidence of Wilde's homosexual lifestyle which was treated as a crime in those days. Found guilty, Wilde was sentenced to two years' hard labour. Once free, he moved to France leading a largely penniless life.

He died in 1900 from a severe ear infection, though for years it was believed that the cause of his death was syphilis.
3. Famous for his "I Have a Dream" speech, which American Civil Rights activist was inspired by Mahatma Gandhi to use non violent means to achieve his goal?

King was a Baptist minister who became famous for his work towards obtaining basic civil rights for fellow African Americans. His well known speech "I Have a Dream" was delivered in 1963 during a political rally in Washington seeking greater civil and economic rights for African Americans.

Inspired by Gandhi's non violent struggle for Indian independence, King, too, opted for the same route in his struggle for civil rights. He was awarded the Nobel Prize for Peace in 1964 becoming the youngest recipient of the honour at that time. Four years later, he was assassinated by James Earl Ray at Memphis, Tennessee.

He was 39 years old when he died.
4. Which British Romantic poet left England to escape charges of incest and sodomy, and ended up being declared a Greek national hero for his role in the Greek war for independence?

Born George Gordon Byron, this British poet's well known works include "She Walks in Beauty", "When We Two Parted" and "Don Juan" among many others. He had a string of high profile affairs and ultimately left England to escape the scandals. On receiving a request from the Greeks to aid them in their quest for independence from the Ottoman Empire, Byron sailed to the Ionian Islands in 1823.

While preparing to attack a Turkish occupied fort in the Gulf of Corinth, Byron contracted fever and the primitive methods of bloodletting used in his treatment further aggravated his condition.

He succumbed to the fever on April 19th, 1824 dying at the age of 36.
5. Russian Olympic champion Sergei Grinkov died suddenly at the age of 28 following a massive heart attack. In which sport did he win gold medals at the 1988 and 1994 Olympics?

Sergei Grinkov and his partner Ekaterina Gordeeva won their first major title at the World Junior Championship in Colorado in 1985. The pair went on to win four World Figure Skating Championships starting in 1986 and also won gold at the Winter Olympics in 1988 and 1994.

Their professional partnership led to marriage in 1991. They also participated in multiple seasons of the figure skating show "Stars on Ice". In 1995, while practicing for a forthcoming season of the show, Grinkov suffered from a massive heart attack, which proved to be fatal, leading to his early death at the age of 28.
6. Which famous child prodigy began composing music pieces at the age of five, performed in front of royalty from the age of seven and had a repertoire of more than 600 works at the time of his death aged 35?

Mozart took to the keyboard at the age of three which watching his elder sister aged seven take lessons. Both children were hailed as prodigies and received an opportunity to perform at the Imperial Court in front of Empress Maria Theresa of the Habsburg dynasty.

This led to several invitations to perform before royalty in different European countries. As he grew older, Mozart was appointed a court musician in Salzburg, the city of his birth. However, he was continuously on the look out for better positions and was dismissed from his job due to his frequent travels.

His prolific composing continued in Vienna and while he received much acclaim, the financial rewards were not commensurate. He died in 1791 of medical complications with the exact cause still unknown.
7. This reluctant politician was forced to join the field when his younger, more politically inclined brother met with an untimely death in an air crash. His mother, the then Prime Minister Indira Gandhi was assassinated by her own bodyguards a few years later leaving him to head one of the oldest political parties in the world's largest democracy. Swept into office on a sympathy wave following Mrs. Gandhi's death, which of the following became India's youngest Prime Minister, assuming the mantle at the age of 40?

Indira Gandhi, daughter of India's first Prime Minister Pandit Jawaharlal Nehru, was India's first female Prime Minister. During her fourth term in office, she was assassinated by her own bodyguards following the infamous Operation Blue Star where she ordered the Army to invade the Golden Temple, revered by the Sikhs, in order to flush out the terrorists seeking asylum within.

A pilot by profession, Rajiv Gandhi, older son of Indira, stayed away from politics, with his younger brother Sanjay assuming the role of successor. Sanjay's death in an air crash in 1980 forced Rajiv to enter the political arena. Merely four years later, he was forced to assume the role of leader of the Indian National Congress party following Indira's death.

While he is credited with have laid the foundations for the telecommunications and information technology boom that followed in the 1990s, Gandhi's decision to send peace keeping forces to aid the Sri Lankan government against the rebel Liberation Tigers of Tamil Eelam (LTTE) outfit earned him the wrath of militant Tamil groups. During an election campaign in the southern state of Tamil Nadu, Rajiv Gandhi was assassinated by members of the LTTE on the 21st of May, 1991, at the age of 46.

Rahul Gandhi is the son of Rajiv Gandhi while Varun Gandhi is the son of his younger brother, Sanjay Gandhi.
8. The first poet to be awarded the Pulitzer Prize posthumously, which young American, famous for her novel "The Bell Jar", battled with depression for a major part of her life before committing suicide at the age of 30?

American poet and writer Sylvia Plath married fellow poet Ted Hughes in 1956. The couple had two children, Frieda and Nicholas, but separated when Plath found out that Hughes had been having an affair. Frequently assailed by bouts of depression, Plath discussed her various suicide attempts with Anne Sexton, who was also a poet and writer. Plath finally succeeded in taking her own life in 1963 by putting her head inside a gas oven while her children slept in the next room.

In 1982, she was awarded the Pulitzer Prize for her anthology of poems published posthumously under the title "The Collected Poems".
9. Which New York Yankees baseball player's career was cut short due to a form of motor neuron disease?

Henry Louis Gehrig, more popularly known as Lou Gehrig, was an American baseball player who played for the New York Yankees for 17 seasons. Nicknamed the 'Iron Horse' for his powerful batting, Gehrig set a number of records in the game including most consecutive games played with a whopping 2130 games.

His streak ended when he retired from the game following the onset of amyotrophic lateral sclerosis, a disease characterised by progressive muscle weakness. The disease, also known as Lou Gehrig's disease, turned fatal and claimed his life at the young age of 36.
10. One of the most poignant accounts of life during the Holocaust, Anne Frank's diary, published by her father posthumously, contained details of the young girl's life spanning the years her family was in hiding during the Nazi persecution. In which country did Anne and her family hide before being found out and sent to different concentration camps?

Originally from Germany, Anne and her family moved to Amsterdam in the Netherlands in 1933 after the Nazis rose to power in Germany and passed various laws discriminating against the Jewish citizens of the country. The German invasion of Netherlands in May 1940 and the subsequent persecution of Jews there forced the family to go into hiding in a small annexe above Anne's father's office in July 1942. Joined by another family a few days later, the Franks continued to live in hiding for two more years. During this period, Anne maintained a diary documenting daily occurrences, her future plans when they were freed, her interactions with her own family members among other things.

The Franks were discovered by the Gestapo in 1944 following an anonymous tip off. Otto Frank, Anne's father, was the only member of the family to survive the concentration camps and published her diary, which had been saved by one of their family friends, to honour her dream of becoming an author.
Source: Author zorba_scank 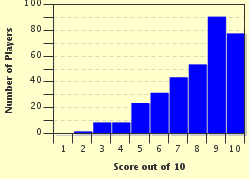 Related Quizzes
This quiz is part of series Sprint #1 2012:

Quizzes created by lones78 and zorba_scank for the Sprint challenge in 2012.


1. Olympics - The Indian Journey Average
2. Let's Hear it for Incompetence! Average
3. Can You Please Focus? Average
4. Numbers Average
5. Hold Your Breath and the Door! Average
6. Some Like It Way Too Hot Average
7. Gone Too Soon, Yet Not Forgotten Easier
8. Going Out in Style Average
9. Four?! Very Easy
10. Rural Life Very Easy
11. Suit Up! Average
12. Lyophilize - Freeze or Preserve? Easier