We're having a party to celebrate some Inventive Italians. Can you identify those that have contributed to our party preparation?

Quiz Answer Key and Fun Facts
1. To help our party along, we need some music. Bartolomeo Cristofori is generally credited as being the inventor of which musical instrument?

Prior to Cristofori's development of the piano, the main keyboard instrument had been the harpsichord, which worked by plucking at strings. The harpsichord gave the player little control over the volume of the notes. Cristofori's instrument was originally called 'gravicembalo con piano e forte', meaning 'harpsicord that plays soft and loud'.

The xylophone is a traditional instrument with no known inventor, and the saxophone was developed by Adolphe Sax, a Belgian. The violin evolved from the lyre, and there are many famous Italian violin makers, including the Amati and Stradivari families.
2. We'll need someone to figure out how much food and drink should be available, which of these Italian mathematicians popularized the use of Arabic numerals (as opposed to Roman numerals) with the publication of "Liber Abaci" ("Book of Abacus or Book of Calculation")?

Nowadays, Leonardo Fibonacci (c. 1170-c. 1250) is most famous for the number sequence named after him (though he did not discover it). However, it was was included in his "Liber Abaci". He is honored today by a statue in Camposanto, Pisa.
3. We're in need of an expressive vocal. Which Italian singer was one of The Three Tenors?

Luciano Pavarotti was born in Modena in Northern Italy in 1935. He, along with Spanish singers Plácido Domingo and José Carreras, started their partnership on the eve of the 1990 FIFA World Cup Final in Rome, Italy. He died of pancreatic cancer in 2007.
4. Should the electricity go out, we'll need to get the battery backups in place. Which of these Italian physicists is credited with inventing the battery?

His full name was Alessandro Giuseppe Antonio Anastasio Gerolamo Umberto Volta. In 1801, Napoleon made him a Count. He is honored today with the museum Tempio Voltiano in Como, Italy.
5. If we are going to a party, we might as well find out what the weather is going to be like. Who is credited with inventing the first barometer?

Torricelli has been accredited with the invention of the first atmospheric pressure barometer, by creating a constant vacuum. His creation was based on a suggestion made by Galileo a few years earlier. The process he used was to fill a 1.2 metre long glass test tube with mercury and turn it upside down onto a dish.

He noticed that the mercury he put in did not pour out of the test tube, observing that an empty space was formed above the mercury creating a form of vacuum. After many observations he concluded that the variations in the height of the mercury were caused due to external factors created by the atmospheric pressure.
6. Many of the guests will be arriving by high-end racing automobiles. Which of these Italians built the car which won the first Monaco Grand Prix?

It was in the Alsace region that Bugatti started his automobile company. Bugatti also designed aeroplane engines and a motorized railcar. During World War II the factory was ruined and the property lost.
7. Some of the music we'll be entertained by will be pre-recorded. Which of these Italian engineers, born in Almese in 1943, was instrumental in the origination of an International Organisation for Standardisation (ISO) standard for digital audio and video?

Chiariglione helped to initiate the Moving Picture Experts Group (MPEG) and was involved in the production of the MPEG-1 and MPEG-2 standards. The group has grown to over 300 members from approximately 200 companies.

In 1999, Chiariglione took the position of Executive Director of the Secure Digital Music Initiative, with the intent to develop a standard for digital music delivery, but he left when unable to lead the many diverse participants to agreement.
8. As we would like well educated kids to join the party which female Italian educator invented and developed a world famous interactive educational system stressing the importance of liberty within limits?

Dr. Montessori's educational methods are used in schools all over the world. Its major conception is to allow children to develop their learning skills and mental capacities by giving them liberty within limits and to allow them to develop at their own pace. Classrooms usually have a mixture of students of different ages, this allows an interaction between children of different mental and physical abilities, allowing their natural curiosity to drive them, which is comparable to what happens in our adult life.
9. Some of our guests will be arriving by seaplane. Which of these Italian Navy men, who corresponded with the Wright brothers, is credited with a successful seaplane flight in 1912?

Mario Calderara learned in 1905 about the Wright brothers flights and began a correspondence which deepened into a friendship that lasted throughout his life. During World War I he commanded a school for pilots of seaplanes. His training record included no casualties - a remarkable record.
10. If anyone has overindulged at our party, we can offer you coffee. Which Italian inventor patented the first steamless coffee machine in 1938?

Gaggia applied for his patent in September 1938 for a machine to be used in his own coffee bar. He founded a company in 1947, producing machines for commercial purposes, before expanding into the home market in 1977. The Gaggia company became a subsidiary of the Dutch owned Philips group in 1999, although the machines produced continue to bear the Gaggia name. Caruso was an Italian tenor and Cirio was a pioneer in the canning of meat and vegetables. Fermi was a physicist who worked on the first nuclear reactor.
Source: Author mlcmlc 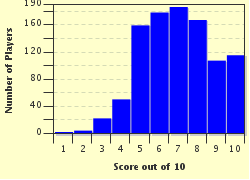 Related Quizzes
This quiz is part of series A Few in People #1:

My quizzes in "People" category