From Zeus to Napoleon to Eminem, so many people through out history have become famous with just one name. See if you can figure out which 'One Name Wonder' I'm describing in each question. Good Luck!

Quiz Answer Key and Fun Facts
1. Greek Mythology. Legend speaks of this mortal being with hair wreathed in snakes and a look that can turn you into stone. Who is she?

Medusa was once a very beautiful girl with the loveliest of hair. She was punished for her sins and cursed to have a head full of serpent-entwined hair. Medusa and her two immortal sisters are known as the Gorgones, three powerful winged daimones. Medusa was seduced by Poseidon and became pregnant.

While laying in a deep sleep, Perseus beheaded her, and there from her neck sprang mortal Khrysaor and the immortal flying horse Pegasus. (www.theoi.com)
2. Ancient Egypt. Her name means "The beautiful (or perfect) woman has come". Who is she?

Nefertiti was the wife of Akhenaten and together they had six daughters. Little is known of their lives and deaths, but what they are known for is their attempt at a religious reformation in ancient Egypt. Egypt, like the rest of the ancient world believed in polytheism. Nefertiti and Akhenaten tried to spread the belief in one God, Aten, the Sun Disc. Nefertiti was pictured worshiping alongside her husband, performing the duties of a god's wife and also doing killings that a pharaoh would normally do.

After Nefertiti and Akhenaten died of mysterious causes, Tutankhamen inherited the throne, and began to restore the belief in polytheism in ancient Egypt. (www.womenintheancientworld.com)
3. Ancient Egypt. She was born in 69 BC in Alexandria, Egypt. After the death of her brother, Ptolemy XIII, she became the sole ruler of Egypt at age 18. Who is she?

Cleopatra, Queen of the Nile, died Aug. 12, 30 BC at the age of 39. For fear of having to live a life she did not want to live, she committed suicide with an asp, an Egyptian snake, which was believed to secure immortality. Her death marked the end of the Egyptian monarchs and the Roman emperors came into rule. Cleopatra had one child with Julius Caesar and three children with Mark Anhony. Because she had such devotion to her country, it is believed that Cleopatra had relations with these men to do whatever she could to save Alexandria, no matter what the price. (www.touregypt.com)
4. Greek Philosophy. He is known for his method of "dialectic", philosophizing by means of question and answer. He never wrote anything down because he felt that knowledge was a living, interactive thing. Who is he?

Because Socrates never wrote anything down we had to rely on Plato (a student of Socrates) and the 'Memorabilia of Xenophon' for our information on him. In 399, Socrates was brought to trial for corrupting youth and for religious heresies. It was also believed that he was tried for teaching and befriending 2 betrayers of Athens.

He was found guilty and gracefully drank a drink poisoned with hemlock. (www.crystalinks.com)
5. Model. She married David Bowie in '92 and has starred in the movies "Out of Africa", "No Way Out" and "House Party 2". Who is she?

Iman was born in Mogadishu, Somalia in 1955. She was the daughter of a diplomat. Her early exposure and interest in politics led her to Nairobi, Kenya to study political science at a local university. It was there that she met fashion photographer, Peter Beard.

This marks the start of a remarkable career. She rose to fame in the late 70's as a Somalian supermodel. She has also tried her hand at acting and creating her own makeup line for dark skinned women. She has two children, one from former husband Spencer Haywood, and one from David Bowie who she married in 1992. (www.askmen.com)
6. Sumo. After his retirement from sumo in 1997, Hawaii born, Salevaa Atisanoe pursued a career in music. In 2000, he released his first CD which includes the song "Livin' Like Kings" feat. Krazie Bone. What is this sumotori's name?

Konishki is one of 9 children born Dec. 31, 1963. At the age of 18, former sumotori Takamiyama (also from Hawaii) opened up his own stable and persuaded Konishki to come to Tokyo to train under him. In 1987, Konishki became the first foreigner to achieve the status of ozeki (champion).

When he retired in 1997, it marked the end of a 15 year long career in sumo with the second highest rank in this sport. At the peak of his career, Konishki stood 6' tall and weighed 600+ lbs. Akebono and Musashimaru are also sumotoris from Hawaii. (www.sumoamerica.com)
7. Actress. She was Sandra Clark in "227" (1985) and Lisa Landry in "Sister Sister" (1994). Who is she?

Jackee Harry was born Aug. 14, 1956 in Winston-Salem, NC. She became bored being a high school history teacher and decided to go into acting. She started off her career on Broadway then ventured out into tv and movies. Some movies she starred in are "Lady Bugs", "You Got Served" and "The Women of Brewster's Place". (www.imdb.com)
8. Singer/Actress. She has set records for the longest gap between number one hits and at one time for being the oldest female artist with a number one hit. Who is she?

Cherilyn Sarkisian LaPiere (Bono Allman) was born May 20, 1946 in El Centro, CA. Her father is Armenian and her mother is part Cherokee. She has two children, Chastity Bono (with Sonny Bono) and Elijah Blue Allman (with Gregg Allman). In 1974, she had a #1 hit, "Dark Lady" and in 1999, "Believe" hit #1 in the charts resulting in the record for longest gap between #1 hits. Cher was a co-host in the comedy/variety show "Sonny and Cher". Though Sonny used to force Cher to go on stage she once said in an interview "without Sonny there would be no Cher." (www.imdb.com)
9. Music. He was born in Newcastle, England. His favorite music is jazz and he can play the sax, the bass guitar and the harmonica among a few others. He got his nickname from a black and yellow sweater he used to wear. Who is he?

Gordon Matthew Sumner "Sting" was born on October 2, 1951. He got his nickname from a black and yellow striped rugby sweater he used to wear which made him look like a bee. He was with the group "The Police" for ten years until 1984 when he decided to go solo.

He has also tried his hand in acting in such films as "Radio On", "Julia Julia" and "Dune". Sting has 2 children from ex Frances Tomelty (1976-1984) and four children from Trudie Styler whom he married in 1992. He has many accomplishments in his career including being honored as MusiCares 2004 Person of the Year, the making of a commercial for Compaq computer in 1999 and induction into the Rock 'n Roll Hall of Fame (as a member of The Police) in March of 2003. (www.imdb.com)
10. Music. He helped start the careers of Vanity and Carmen Electra. Throughout his career, he has gone by several different names. He has been known as Camille, Alexander Nevermind, Paisley Park and Jamie Starr. Who is he?

He has also been known as the Artist Formerly Known as Prince. Prince Rogers Nelson was born June 7, 1958 in Minneapolis, Minnesota. He is the son of jazz pianist John L. Nelson whose band's name was "The Prince Rogers Band". By age 18 he had recorded several demos and by age 19 he got an amazing deal with Warner Bros.

It included a six-figure salary, several-album contract and freedom as a writer, musician and producer. In March of 2004, Prince was the newest inductee into the Rock 'n Roll Hall of Fame. (www.imdb.com)
11. Entertainment. She is known as the "cuchi cuchi" girl. Who is she?

Maria Rosario Martinez Molina Baeza or Charo to all of us was born March 13, 1941 in Murcia, Spain. Ex-husband Xavier Cugat brought Charo to America along with her mother and sister when she was just 16-years old. In 1966, they got married; this lasted till 1978 when she then married Kjell Rasten.

She learned to play the Guitar at nine and was the winner of the 'Guitar Magazine' Readers Poll as Best Flamenco Guitarist two years in a row. She got her nickname from her dog Cuchillo. Everyone thought she was so cute when she would wiggle and say "como Cuchi, como Cuchi" or just "cuchi-cuchi".
12. Entertainment. She is a huge Ann Margret fan and at age 17, she became the youngest showgirl in Vegas history. Her trademark is a beauty mark under her right eye, a black dress with a plunging neck line and a slit on the right side, black fingernails, black pumps and a bouffant hairdo. Who is she?

Elvira Mistress of The Dark. Cassandra Peterson was born Aug. 17, 1949 in Manhattan, Kansas and raised in Colorado Springs, Colorado. In late Aug. of 1981, Cassandra landed the role of television movie hostess for KHJ-TV and by September of the same year, the development of "Elvira" was created with the help of make-up artist Robert Redding. Elvira was the first woman to do a music video in 3D. ("Superstition"). Femme Fatales magazine named Elvira #1 of Sci-Fi's Sexiest B-Queens.

The Pentagon even named a Stealth computer system "Elvira" which was inspired by her. Elvira is a strong supporter of animal rights and gay rights.

She was once married to Mark Pierson in 1981 and has one child, Sadie, born in 1991. (www.imdb.com)
13. Singer/Actress. She made her film debut in "To Sir With Love" where she starred alongside Sidney Poitier and also performed the title song which went to #1 in the US. Who is she?

Marie McDonald McLaughlin Lawrie was born Nov. 3,1948 in Glasgow, Scotland. At the age of 14, she toured with a local group "The Gleneagles" when she was discovered by Marion Massey who later became her manager and mentor. Massey signed Lawrie and her group but first decided to change Marie McDonald McLaughlin Lawrie to just "Lulu" and her groups name to "The Luvvers".

In 1965, Lulu was voted "Britain's Most Promising Newcomer in Show Business". "To Sir With Love" gave Lulu the honor of being the only non-American female singer to ever top the US singles chart for five weeks. Rounding out her four decades of an international star, Lulu was awarded the O.B.E. award in 2002 and was given a Doctorate Of Music by The University Of Westminster. Lulu was once married to Maurice Gibb of the Bee Gees in 1969 and to London hairdresser, John Frieda, in 1976. Lulu and Frieda had a son, Jordan, in 1977. (www.lulu.co.uk)
14. Apothecary and poet. He is known for writing his prophetic verses, the "quatrains", in ten section divisions called, the "Centuries". Who is he?

Michel de Nostradame was born Dec. 14, 1503 in St. Remy, Provence, France. Nostradamus was said to be medically ahead of his time. His treatment of lessening the impact of the Black Death (bubonic plague) in Europe was a success. He began writing his 'Centuries' in 1554.

They were published in 1555 and 1558, and have been in print for all to interpret ever since. He has been credited with many predictions, from the assassination of JFK, to the destruction of the space shuttle Challenger, to even his own death on July 2, 1566. Because his visions were mostly of death and war he was often referred to as the prophet of doom. (www.sacred-texts.com and www.crystalinks.com)
15. Music. Her songs can be heard in movies such as, "L.A. Story", "Green Card", "Toys" and "Sleepwalkers". Who is she?

Eithne Ni Bhraonain was born May 17, 1961 in the Gaeltact area in County Donegal, Ireland. She is the middle child of nine children. She started her musical journey when she joined her family band called "Clannad". She played the keyboard and backing vocals. Enya didn't like being in the background of Clannad, so when the band split from their manager, Nicky Ryan, Enya followed him and his wife, Roma to Dublin.

Her first album titled "Enya" was heard by Rob Dickins, the head of WEA Music UK, and through their backing "Watermark" was released in 1988.

The release of "Orinoco Flow" brought public attention to Enya and topped the #1 charts in many countries. (members.aol.com/karina255/enya/)
Source: Author honey2u 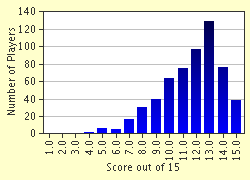 
Other Destinations
Explore Other Quizzes by honey2u