Throughout history certain notables have managed to pick up some very interesting nicknames. This quiz will test your knowledge of a few of the wackiest of the wacky.

Quiz Answer Key and Fun Facts
1. There was an American clergyman who was the father of the author of "Uncle Tom's Cabin." He not only had a daughter who was an author but his five other children were also accomplished in their fields. Who became known as "The Father of More Brains Than Any Other Man in America?"

Harriet Beecher Stowe was the author of "Uncle Tom's Cabin." Another daughter, Isabella Beecher Hooker, was also an author and a leader in the women's suffrage movement. His third daughter, Catherine Beecher, was an educator and advocate of incorporating kindergartens into school systems. Lyman had three sons as well.

Henry Ward Beecher was a social reformer, Edward Beecher was a theologian, while Charles Beecher was a composer of religious hymns and an author.
2. In 1938 Douglas Corrigan flew his single-engine Curtiss Robin from New York to Dublin, Ireland. The problem was, his flight plan said he was heading for California. What nickname did Corrigan pick up from this incident?

Corrigan had actually been applying for permission to make a solo flight to Ireland since 1935. The government turned him down, saying his plane was unsuitable for such an undertaking. In July 1938 he was in New York with his plane. On the 17th he took off to the east in thick fog. Before he left he told people he was returning to California. He never turned around. Twenty-eight hours, thirteen minutes later he landed in Dublin. When asked what happened, Corrigan told reporters that he could not see the ground due to the fog, then misread his compass. He thought he was going west and not east. He did not realize the error until the clouds finally broke and he saw an ocean beneath him--the Atlantic Ocean. At that point he checked his compass and realized he was not heading west. It was too late to turn around so he proceeded on his easterly heading until he made landfall. When reporters continued to badger him with questions, he responded: "That's my story."

Not only did Corrigan pick up a great nickname for what some believe was a deliberate attempt to cross the Atlantic solo but he may have been the originator of a line I use all the time: "That's my story and I'm sticking to it."
3. Gerald Baines Lambert was the son of Jordan Wheat Lambert, one of the men who invented Listerine mouthwash. Gerald used the Latin word for 'having bad breath'. The ensuing advertising campaign helped Gerald earn $25 million and retire at age 36. What nickname did he earn from this action?


Answer: The Man Who Invented Halitosis

Listerine was named for Dr. Joseph Lister, an English physician known as "The Father of Modern Antiseptics."

Halitosis was a made-up word but Listerine's advertising made it sound like a medical condition--a condition that could be treated with Listerine.
4. Which famous Italian explorer was given the name "Admiral of the Mosquitoes" by his men?

Columbus promised his men gold and riches if they would sail with him in his search for a new trade route to the Indies. Of course they did not make it to Asia. Instead they found Cuba and Santo Domingo where there was a preponderance of mosquitoes and a paucity of gold.
5. Robert Todd Lincoln, son of Abraham Lincoln, served as Secretary of War from 1881-5 under Presidents Garfield and Arthur and as Ambassador to the United Kingdom from 1889-93 under President Harrison. He garnered a very unique, albeit unwelcome, nickname. What nickname did Robert Todd Lincoln have?

Robert Todd had been invited to attend the play at the Ford's Theater with his parents the night Abraham Lincoln was shot but opted to stay home instead. On July 2, 1881 he was at the Sixth Street Station in Washington DC at the invitation of President James Garfield and was an eyewitness when Garfield was shot. On September 6, 1901 he was at the Pan-American Exposition in Buffalo at the invitation of President William McKinley when McKinley was assassinated.
6. Andrew and William Smith, from the Hudson River Valley of New York, are the guys on the Smith Brothers Cough Drops boxes. What interesting nickname did they have?


Answer: The Beards That Made Poughkeepsie Famous

Their father, James Smith, opened a small restaurant in Poughkeepsie. One day a peddler came by and James bought a cough drop recipe from him. He made a batch and sold them for coughs, colds and croakiness. They became a hit and the Smith Brothers Company was born.

In an effort to distinguish their product the Smith brothers, Andrew and William, came up with a special trademarked packaging. The cough drop box had their pictures, one in the top right corner and the other in the top left, with the words "Trade" under one and "Mark" under the other to signify that the design was trademarked. People who saw the box misunderstood and thought the brothers names were Trade and Mark.
7. Sean Connery has appeared in over sixty films in his career. He has won a Golden Globe, an Academy Award and even has an asteroid named after him. It was his portrayal as the womanizing secret agent in seven James Bond movies that earned him what wacky nickname?

In his early life, Sean Connery worked as a milkman, coffin polisher and Navy seaman. He even competed in the Mr. Universe competition one year, taking third place in the Tall Men's Division.
8. This blonde actress and singer of the late 1940's through the 1960's had a very wholesome persona from her work in movies like "Please Don't Eat the Daisies," "The Glass Bottom Boat," and "With Six You Get Eggroll." She also had her own TV show that had her song "Que Sera, Sera" for its theme song. Who was known as "The Three-Million Dollar Freckled Corporation?"

Doris Day, Annette Funicello, Sandra Dee, Rock Hudson, Elvis Presley and Troy Donahue are all mentioned in the song "Look At Me, I'm Sandra Dee" as featured in the movie "Grease." Doris and Annette are the only ones mentioned in that song who are still alive.

Doris Day is also mentioned in "We Didn't Start the Fire" by Billy Joel, "Dig It" by The Beatles, "Wrap Her Up" by Elton John, "Wake Me Up Before You Go-Go" by Wham, "Mirror Door" by The Who and "What Do We Do? We Fly" from the Rodgers and Sondheim musical "Do I Hear a Waltz?"
9. This actor had the nickname "The Grand Old Man of the Aw Shucks School." He starred in such films as "Harvey," "Rear Window" and "You Can't Take it With You." He also starred in many westerns such as "The Man Who Shot Liberty Valance" and "Cheyenne Autumn." Who was this amazing actor?

Jimmy Stewart was the first actor to join the armed forces in World War II, joining the Army Air Corps a year before Pearl Harbor. He was awarded the Distinguished Flying Cross, seven battle stars, the Croix de Guerre and the Air Medal. After the war he stayed in the reserves, eventually retiring as a Brigadier General.
10. Daniel Webster argued several cases before the US Supreme Court. Later he was elected to Congress from New Hampshire. He moved to Massachusetts and was elected to Congress as a representative of that state and later became a US Senator. President Harrison appointed him Secretary of State. Why was he called "Steam Engine in Pants?"


Answer: He was so active

"Steam Engine in Pants" used to be a fairly common nickname for someone who was very active. Teddy Roosevelt's daughter referred to him in that way. Milton Winternitz at Yale, William Harper of the University of Chicago and Gutzon Borglum the creator of Mount Rushmore were all given that nickname. 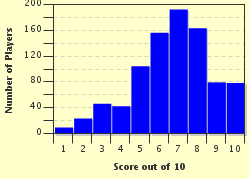 Related Quizzes
1. What Was Your Real Name? Very Easy
2. AKA Very Easy
3. Assorted Nicknames Easier
4. Famous People with Animal Names or Nicknames Easier
5. It's How We Know Them Easier
6. I Wonder - Were They Wrong For That? Easier
7. Three Part Names Easier
8. Name Game Easier
9. The Famously Dubbed Easier
10. Who's Who: Hanging Out in Central Park Easier
11. Animal Nicknames II Easier
12. Best of the Best: U.S. Generals Easier