Some people use first and last names while others settle for one name like Madonna. The following questions relate to people who use a three-part name. See how many you can guess. Good luck!

Quiz Answer Key and Fun Facts
1. Who was the famous actor who provided the voice for Darth Vader in the George Lucas trilogy, "Star Wars"?

Although David Prowse donned the black suit and mask, it was the sinister voice of James Earl Jones which brought a powerful dimension to the character. Jones went on to become a famous actor in films such as "Field of Dreams" and "The Great White Hope".
2. What legendary star became the first person to turn down the Academy Award for Best Actor in 1970?

As the gruff and outspoken WWII General George S. Patton, Scott delivered a powerful performance. The award remains to this day in the Academy vault, waiting to be picked up. In an interesting note, Marlon Brando repeated the act two years later when he refused the same award for his portrayal of Vito Corleone in "The Godfather"
3. Who is related to the tragic event of November 22, 1963?

JFK's alleged assassin changed the world on that day in Dallas. He was murdered two days later in a Dallas police station. Booth assassinated Lincoln, Gacy was a famous serial killer and Chapman murdered Beatle, John Lennon.
4. In 1975, rock legend Elton John recorded the hit "Philadelphia Freedom". The song was dedicated to what famous tennis star?

Elton has always been an avid sports fan, especially tennis. When he and Billie Jean became friends, he promised to record a song about her. It became one of Elton's biggest hits ever.
5. Which of the following rock stars was NOT a legendary guitarist?

Although he was no guitarist, Roth did provide the great vocals for the rock band Van Halen, which of course was led by guitarist Eddie Van Halen. Vaughn and King are considered two of the best blues guitarists ever.
6. You may know that legendary boxer Muhammed Ali suffered from Parkinson's disease, but can you name the TV star who also has the disease?

Fox appears in a commercial with Ali to help promote research into the cure of the disease which affects the muscular and nervous systems. Fox is best known for his role as Alex Keaton on the 80's sitcom "Family Ties" as well as the "Back to the Future" movie trilogy.
7. Walter Ray Williams has been considered the #1 ranked player in what sport?

Williams, the six-time PBA champion is considered to be one of the top five bowlers of all time along with Earl Anthony and Mark Roth.
8. In what fantasy TV show did Sarah Michelle Gellar star?

As Buffy, she rids the world of evil vampires using her powers of strength and magic.
9. What actor starred in the hit movie "Sling Blade"?

Thornton played the part of Carl, a mentally retarded murderer who is befriended by a young boy and his mother. He rescues them from an abusive step father by murdering him. Thornton was nominated for an Oscar for the role.
10. Which of the following TV stars won a total of six individual Emmy awards for acting? 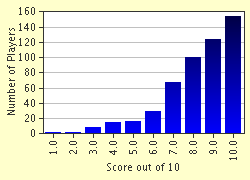 
Other Destinations
Explore Other Quizzes by RDA333a