There is, perhaps, no greater honor than being given a nickname that's known and spoken of worldwide. I've created this quiz to see if you can identify some of the more well-known ones. Enjoy.

Quiz Answer Key and Fun Facts
1. Our first person is considered to be one of the most prolific inventors in history, holding about 1000+ patents to his name. He is often credited with applying the concept of mass production to inventions and for opening up the first considered industrial research laboratory in Menlo Park. Some of his inventions include the useful electric light and the famed phonograph. He is often called "The Wizard of Menlo Park." Who am I talking about?

Thomas Edison was indeed one of the most influential inventors of his, and our, time. He had only about 3 official months of schooling, after which he was home-schooled by his mother. However, he became one of the brightest men that ever lived. Another one of his famous inventions is the motion picture camera.
2. During the age of silent films, talented and skillful character actors were very much needed. And, who answered to this calling? Why, of course, no man less than "The Man of a Thousand Faces." He was mainly known for portraying mutilated and mangled characters, using his new makeup techniques to create such realistic effects. He has a star on the Hollywood Walk of Fame and is also famous for his lead role in "The Phantom of the Opera" (1925). Who was he?

A caricature of Lon Chaney, designed by Al Hirschfeld, was placed on a US postage stamp in 1994. Lon also had a son, Lon Chaney, Jr., who also went into the film business. He (the son) was also famous for his roles in monster movies also, notably as "The Wolf Man."
3. Our next guy on the list is quite special. Occasionally, you might find him saying, "Ehhh... what's up, doc?" Yep, you got it, he played the voice of Bugs Bunny, from 1940 to 1983. His other famous voices were Daffy Duck, Woody Woodpecker, Marvin the Martian, and Road Runner, along with many others. He's known to the world as "The Man of a Thousand Voices." Th-th-that's all the clues folks!

Mel Blanc was born May 30, 1908 in San Francisco, California. His career first began on the radio. It only moved towards animated cartoons when he joined Leon Schlesinger Studios in 1936 and took over the voice of Porky Pig and Daffy Duck. Other voices by Blanc are Tweety Bird, Sylvester Pussycat, Yosemite Sam, Wile E. Coyote, Speedy Gonzales, Barney Rubble, and Elmer Fudd. On a more humorous note, he also credited Bugs Bunny for saving his life once, when he was in a coma after a terrible car accident.
4. This one is an American military leader. For defeating the American Indians at the Battle of Tippecanoe, he earned the nickname of none other than "Old Tippecanoe." This man was also involved in the War of 1812, notably the Battle of the Thames. And, if that wasn't enough, he's also the 9th President of the United States. What is his name?

For some interesting facts, Harrison was a man of firsts. When he took office at the age of 68, he was oldest guy to become President (until Ronald Reagan in 1981 at the age of 69). Also, he was the first President to die in office and had the briefest presidency of 30 days.
5. For the next question, we are going to visit a friar and abbot. However, he is more famous for his studies on the inheritance of traits. His lab rats of choice? Pea plants, of course! He was born July 20, 1822 and died at the age of 61 on January 6, 1884. Often, he is understood to be the "Father of Genetics." Who is he?

The sad thing about Gregor was that the significance of the scientific discoveries he made was not recognized until the early 20th century. It had to be "rediscovered" by Hugo de Vries, Erich von Tschermak and Carl Correns.
6. A distinguished orator, statesman and debater, this man was the founder and leader of Whig Party (United States). He had a very special talent of bringing others to an agreement of some sort, whatever the problem may be; talent that he used to settle 2 major disputes, where his solutions became to be known as the Missouri Compromise and the Compromise of 1850. For that, many called him "The Great Compromiser." Who was this man?

Henry Clay was born on April 12, 1777 in Virginia. He was the seventh of nine children. He passed away on June 29, 1852 in Washington D.C. and was the first person to lie in state at the US Capitol. Buried at Lexington Cemetery, his headstone reads "I know no North-no South-no East-no West."
7. This one isn't so nice. He was born in Günzburg, Germany, the eldest of 3 brothers. He was a German SS officer working at the Auschwitz concentration camp. Notorious for selecting who among the imprisoned arrivals would live or be put to forced labor, they knew him as the "Angel of Death." One could say that he had a strong fascination in twins, almost an obsession, and performed many cruel experiments upon them. What was his real name?

As the war drew to a close, Mengele went into hiding in Germany under a false name. He managed to escape to South America, lying low in Argentina and Brazil. Going for a swim, Mengele suffered a heart attack or stroke in the water and drowned. He was buried under the name of Wolfgang Gerhard but forensic testing in 1985 verified his real identity.
8. It's a bird! It's a plane! No, it's the "Man of Steel." He's faster than a speeding bullet, more powerful than a locomotive, and able to leap tall buildings in a single bound. Wearing red and blue spandex (with a touch of yellow) he utilizes such abilities like super strength, super speed, flight, keener hearing, and x-ray, heat, telescopic and microscopic vision. Even with all that special sight though, he still sees telephone booths as dressing rooms. So, who is this DC Comic book character?

Born as Kal-El on the alien planet Krypton, and raised on Earth as Clark Kent, he made his first ever debut on June 1938 in "Action Comics #1". He is undoubtedly one of the most famous superheroes ever to be conceived of. Other nicknames for him include "The Man of Tomorrow," "The Last Son of Krypton" and, often by his fellow superheros friends, "the big blue Boy Scout."
9. Strap on your boxing gloves and get ready to float like a butterfly and sting like a bee! A retired boxer, the former three time World Heavyweight Champion and the winner of an Olympic gold medal was also named "Sportsman of the Century" by Sports Illustrated in 1999. He rejected a draft of service in the United States Army during Vietnam War due to his religious beliefs. He changed his name after joining the Nation of Islam (he later converted to Sunni Islam in 1975). Some know "The Greatest" also as the "Louisville Lip." Who is he?

"The Greatest" was more or less a nickname Ali gave to himself, by making the bold claim after a bout, "I am the greatest!" Others called him the "Louisville Lip" for his quick remarks and witty comments. Nevertheless, Ali was one of the best boxers to ever go into that profession, defeating almost all the top Heavyweights in his time and having so many different honors held to his name.
10. Flying in his custom blood-red Fokker Dr.I triplane, this man alone downed 80 enemy pilots in the skies and dogfights of World War I. He received the Pour le Mérite, the Kingdom of Prussia's highest military order until the end of the War, after his 16th confirmed kill. He was shot down on April 21, 1918 and died. People worldwide still know this man as the "Red Baron."

There is quite a volume of enigma still surrounding this man. For one, his real number of kills is still somewhat disputed. Some say that his record was inflated for propaganda purposes. Others think it could really be as high as 84. But, 80 is generally the most accepted number. Also, there is much argument about who fired the fatal shot.

The Royal Air Force credited the kill to Roy Brown, a Canadian World War I flying ace. However, many other experts, in light of new investigations, believe that he was killed by AAA fire, or, someone on the ground, meaning, well, that Richthofen never really lost a single dogfight.
Source: Author wolfie001 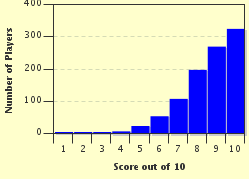 
Other Destinations
Explore Other Quizzes by wolfie001