Quiz Answer Key and Fun Facts
1. I wrote "The Red Badge of Courage" - and I'm a large, long-necked bird. What is my surname?

Cranes are lovely graceful birds found on every continent except Antarctic and South America. Stephen Crane (1871-1900) was an American writer, journalist and poet who died of tuberculosis aged only 28. "The Red Badge of Courage" is a story set in the American Civil War. I had to study it at high school and to be honest, it gave me the creeps, especially the line where the main protagonist comes across a dead soldier, and notes in horror the ants crawling out of the eyes of the corpse, carrying "their dreadful burden."
2. I am a famous golfer with a given nickname that is also a ferocious, but beautiful, animal. Who am I?

Woods is an American professional golfer, who ranks among the most successful ever to hit the greens. In 2010 alone he earned over $90 million dollars. Well, let's hope his long-suffering wife has received at least half of that. Woods is supposed to suffer from sex addiction, a woeful (and extremely dubious) addiction that has resulted in an expensive divorce, because, alas, his condition manifested itself with a large number of young women outside of his marriage.

A tiger is a beautiful, but savage striped animal which can reach 11 foot in length and weigh up to 660 lbs. It also possesses long, scary teeth, some of which are at least four inches long.
3. I am a well known clergyman - and a little feisty canine that was named after me. What is my name?

The little Jack Russell terrier is a feisty, brave little dog, full of incredible energy. It was bred by the Reverend John (Jack) Russell, an English clergyman of the 19th century, who was fond of sports and breeding dogs. He was one of the founding member of the internationally renowned Kennel Club and during the course of his lifetime, also became a much respected judge.

He bred the Jack Russell terrier from a little white female dog he purchased from his milkman.
4. I am a woman famous for setting up modern nursing procedures - and a bird with a delightful song. What is my surname?

Florence Nightingale was an English nurse and writer, known for setting up the first professional nurse's training school. She rose to prominence for her nursing work during the Crimean War. The soldiers came to call her "The Lady With the Lamp" because of the nightly tours she made of the wards as she stooped over the sick men to try to ease their pain and suffering.

A nightingale is a small plain-coloured bird with a most exquisite song. It came by the name because of its tendency to sing during the night as well as during the daytime. It's the male that does the singing. Mrs Nightingale just goes about her business quietly tending to the kids. Interestingly, nightingales that are kept in a city environment tend to sing louder than their counterparts elsewhere, in order to drown out the background noises from the noisy world outside. So that makes it either one clever little bird that quickly adapts to its environment - or just a cute little showoff.
5. I am Augustine, a famous theologian of the late fourth century and early fifth century - and the abbreviated name of a large African animal that loves to wallow. Can you name the area from which I came?

St Augustine was Bishop of Hippo Regius in Algeria in the first century AD. Today this area is known as Annaba. His writings had a profound effect on how western Christianity developed and spread.

A hippo is a large African land animal that spends much of the long hot days there in that continent by remaining in water or mud to keep cool. Amazingly so, it also gives birth in the water, perhaps setting the much later practice of water birth now popular with young human mothers. My beautiful eldest daughter is pregnant with twins at present and in truth, she looks like a little hippo herself.
6. I am a retired NBA basketball player - and a member of the Aves classification of animals. What is my surname?

Born in 1956, Larry Bird is an American NBA basketball player and coach, now retired from those two positions. Birds are living creatures, most of which can fly, and they can be found in every country and area of the world. A bird is a bird is a bird.
7. I am an American writer with a first name of a precious jewel and a surname of a male deer. What are my two names?

Pearl Buck (1892-1973) is a renowned writer who spent much of her life in China. Hers is the pen that gave us the work "The Good Earth", which won her the Pulitzer prize in 1932 and the Nobel Prize for Literature in 1938. A buck is a common name applied to a male deer. Sadly, it's also a slang term for a financial commodity of which I'm always notoriously lacking.
8. I am J.R. Ewing's mother in real life - and a bird similar to a swallow. Do you know my surname?

Mary Martin (1913-1990), the mother of Larry Hagman who played J.R. Ewing in the television series "Dallas", was an accomplished actress and singer. Three of the more famous roles identified with her name are Nellie Forbush in the stage musical "South Pacific", Maria in "The Sound of Music" and Peter in "Peter Pan".

Martins and swallows belong to the same family of birds. An interesting feature of this cute little bird is that it has adapted to be able to feed while still in mid-flight. Mother Nature is astonishing, isn't it? The little Martin is akin to travelling first class on an aeroplane.
9. I am an English writer and poet who was born in the 18th century and died in the 19th - and a young farm animal. Do you know my surname?

Charles Lamb was an English writer who lived from 1775 to 1834, most known for his works "The Essays of Elia". He's been described as "the most lovable figure in English literature". A lamb is an adorable little playful creature that is the offspring of a dignified and stately sheep, Mrs Ewe. And of course, Mr Ram has a baa or two to say about the matter as well.
10. I am a famous English explorer and privateer - and a male bird. What is my surname?

Francis Drake (1540-1596) was an English sea captain, slave-trader, pirate and politician who lived during the reign of Elizabeth I. She awarded him a knighthood in 1581. As well as his sailing exploits, he also became a member of parliament. How appropriate that a pirate should become a politician.

He headed the first circumnavigation of the globe by the English from 1577 to 1588, and was also second in command of the English fleet that battled the Spanish Armada in 1588. He died of dysentery while on another overseas expedition and, dressed in full armour, was buried in a lead coffin at sea somewhere near Panama. People still search for his coffin, but it's proving as elusive as the fine sailor himself.

A drake is a male duck and there isn't much else to say about that but "Quack, quack!".
Source: Author Creedy 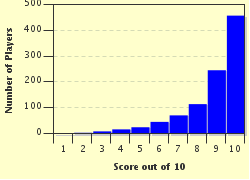