The Famous and their Nicknames Quiz

There is probably no greater claim to fame than having acquired the status of a nickname that's known worldwide, such as the "Iron Lady" or "Elvis the Pelvis." See which of these you can identify.

Quiz Answer Key and Fun Facts
1. What was the nickname given to Al Capone?

Al Capone was born Alphonse Capone on January 17, 1899 in Brooklyn. Infamous for the St. Valentine's Day Massacre on February 25, 1929, he died on January 25, 1947.
Other qualifications applied to him: "the Big Fellow" and "Public Enemy Number One."
Of course the one and only Boss worth his salt is Bruce Springsteen.
The Chief is what Dev, aka Eamon de Valera, was called.
2. Alexander Graham Bell has been called the "Father of the Telephone" and Robert Oppenheimer the "Father of the Atomic Bomb," but which of these authors qualifies as the first to have been called the "Father of the Four-Letter-Word"?

There are more "Fathers Of ..." Walter Chauncey Camp (1859-1925) has been called the "Father of American Football" and Sir Stanley Rous (1895-1986) got nicknamed the "Father of English Football." Igor Sikorsky (1889-1972), a naturalized American, was the "Father of the Helicopter," but David Bushnell (1724-1824) had already become the "Father of the Submarine" long before.
3. Which of these celebrities in British history was once called "the First Gentleman in Europe"?

Beau Brummel (1778-1840), an English dandy and wit, was an intimate of the later George IV. At one time they were known as George the Greater (the Prince Regent) and George the Lesser (Brummel). Brummel fled to France after a quarrel with the Prince. He died insane in a hospital at Caen.
George IV himself reigned from 1820 until 1830. He had been born on August 12, 1762.
4. Which of the English King Henry VIII's six Wives was rather unkindly nicknamed "the Flanders Mare" by her husband?

Cleves is now in Germany, but it is only a few miles beyond the Dutch town of Nijmegen.
As is well-known to historians, at that time the term Flanders was not used in the limited sense as it is used today.
When in England they spoke of Dutch Houses (e.g. at Sandwich), that may have come down to the same sort of reference as when elsewhere they mentioned "Flemish Weavers" (e.g. at Canterbury).
The "Low Countries by the Sea" were split up only in the sixteenth century and the term referring to all of the so-called seventeen provinces alternated from the "Netherlands" to "Leo Belgicus."
"Flanders" was a vague term for the flatlands (floodlands) near the North Sea. Even parts of modern France and the modern Netherlands are still today called "Flanders." Examples: Departement du Nord (area near Lille) and the Dutch area south of the Scheldt that is traditionally called "Zeeuws Vlaanderen."
In spite of his not so very flattering qualifications of her, Henry VIII seems to have remained on good terms with her even after their (speedy) divorce.
As is well known King Henry did not limit his quarrels with Anne Boleyn (the "Great Whore") and his very young bride Katherine Howard to name calling.
As to Katherine Parr she survived the King as she had survived some earlier husbands already. She probably was more of an old age companion than a bedmate to the King.
5. Which of these actors or movie stars was nicknamed "the Frank Sinatra of Shakespeare"?

The one who qualified Richard Burton as such was somebody who knew him well: Liz Taylor.
Burton was born as Richard Jenkins on 11 October 1925 at Pontrhydfen, Wales and died on August 5, 1984.
Gielgud lived from 1904 until 2000 and was very much a contemporary of Olivier, who was born on 22 May, 1907, at Dorking and died on 7th of November 1989.
Kenneth Branagh, was born in Belfast, Northern Ireland on 10 December 1960 and impressed the world with some great Shakespearean films.
6. Which of these was the first to be 'baptized' the "Great American Navel"?

Cherilyn Sarkisian Lepiere was born at El Centro, California on 20 May 1946. Her first husband was Sonny Bono.
7. The U.S.A. may have had their "Great Emancipator" (Abraham Lincoln) and their "Great Communicator" (Ronald Reagan), but it's only in Britain that you can find "Great Commoners--" a commoner in this context being a member of the House of Commons. Which of these first earned him or herself that title?

William Pitt was the only Commoner in the Cabinet in 1783. Also W.E. Gladstone (aka the "Dismember for Britain") and David Lloyd George were at one time called the "Great Commoner." Another nickname for D.G. Lloyd was the "Goat."
In spite of his "pipe-smoking" gimmick, Harold Wilson never achieved the status of Great Commoner.
Margaret Thatcher earned various "qualifications" but she probably was far too uncommon to ever be called a commoner. The nearest she got to a House of Commons nickname was "the Westminster Ripper." Other names for her: "Snobby Roberts," "the Milk Snatcher," and "Boadicea" (that other Warrior Queen).
William Pitt the Elder lived from 1708 till 1778. William Pitt the Younger lived from 1759 till 1806. Other nicknames for him: the "Bottomless Pit" and the "Pilot that Weathered the Storm."

The Americans too had their Great Commoner, only a little later: William Jennings Bryan three time US Democratic nominee for President in the years 1896, 1900 and 1908.
8. In 1298 at Falkirk, the "Hammer of England" (aka William Wallace) was badly defeated by somebody whom history has described as the "Hammer and Scourge of Scotland." Which of these was another nickname for that 'somebody'?

Edward may have used "longbows" to defeat the Scots, but "Strongbow" was the nickname given to the "Coloniser of Ireland," the Earl of Pembroke.
'Butcher' is a qualification that was "awarded" to the Duke of Cumberland, the victor of the Battle of Culloden, called "Sweet William" by the English and "Stinking Billy" by the Scots.(Third son of George II, born in 1821, died in 1865).
It was in April 1170 that Richard Strongbow (at the request of Richard Mac Murchada, Lord of Leinster) started his Irish campaign.
In 1171-1172 the English King Henry II mounted his own Irish campaign to ensure that Strongbow's conquest were recovered by the Crown.
Longshanks refers to Edward I's height.
9. Which of these was such a symbol of a typical British attitude in international politics that he got the nickname "Old Wait And See"?

Asquith was the British prime minister from 1908-1916. His tendency to vacilliate became particularly apparent in war time.

Harold Macmillan may have grown to old age, but he was never called "Old Wait And See." His habit of dismissing ministers earned him the nickname "Mac the Knife."
10. Even the military, time and again, acquire such a degree of fame that their nicknames become universally known. Which of these earned himself the qualification "the Soldiers' General"?

Montgomery was "Monty," Eisenhower was "Ike" and of course only Patton could have deserved the name "Old Blood And Guts." Sir Brian Horrocks assisted Monty in defeating Rommel.
A remarkable general's nickname is the name under which Major-General Robert Craufurd, aka "Black Bob," is known to posterity: "the Teapot General."
Also the U.S.A. General Omar Bradley earned himself the nickname the Soldiers' General. He was born in 1893 and died in 1981.
More info on Bradley via www.multied.com/Bio
Source: Author flem-ish 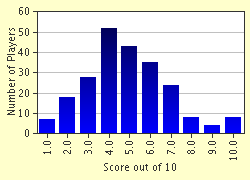 Related Quizzes
1. What Was Your Real Name? Very Easy
2. AKA Very Easy
3. Assorted Nicknames Easier
4. Famous People with Animal Names or Nicknames Easier
5. It's How We Know Them Easier
6. I Wonder - Were They Wrong For That? Easier
7. Three Part Names Easier
8. Name Game Easier
9. The Famously Dubbed Easier
10. Animal Nicknames II Easier
11. Who's Who: Hanging Out in Central Park Easier
12. Best of the Best: U.S. Generals Easier