These people lived at some stage during the twentieth century, but do you have any idea who the following ten people with the letter C as either first, middle or surname are?

Quiz Answer Key and Fun Facts
1. This actor began working life as a waiter and a pool hall racker and later went on to become one of Hollywood's tough guys of the screen, but who won the Oscar for Best Actor in 1943 for his role in 'Yankee Doodle Dandy'?

After making it to Broadway, Cagney shoved a grapefruit into Mae Clarke's face in the film 'The Public Enemy' (1931). He made a series of cheap, quick but popular 'tough guy pictures', but proved depth and sensitivity of his acting playing Bottom in a 'Midsummer Night's Dream' (1935) and in 'Angels with Dirty Faces' (1938) was cast alongside Humphrey Bogart.

Cagney tried his hand first at romance, then comedy, where he revealed a masterful sense of timing. His popularity was ensured when, drawing on his hard background, he played George M Cohan in 'Yankee Doodle Dandy'.

In the 1950s he tried directing, while also continuing to act in 'Man of a Thousand Faces' (1957) and appearing in 'One, Two, Three' (1961). His final film was 'Ragtime' (1981) before his death five years later.
2. This opera singer, born to Greek parents, was so highly regarded that Leonard Bernstein called her "The Bible of opera", but who was this soprano who became famous for singing Rossini, Bellini and Donizetti?

She almost single handedly revived the early nineteenth century operatic repertoire with her performances of Rossini, Bellini, and Donizetti. Her first professional appearances were in Athens, where she concentrated on Verdi and Wagner, but her powerful, expressive, and wide ranging voice and extending repertoire took her to La Scala, Milan, with additional seasons in London's Covent Garden and the New York Met in the mid 1950s.

Despite her intelligent musicality, Callas was an inconsistent and occasionally unreliable performer; her famous liaison with Greek shipping tycoon Aristotle Onassis coincided with a vocal crisis that effectively ended her career.

She died of a heart attack in 1977.
3. Born near Venice in 1922 to French parents, this designer began his career in Vichy as a tailor's assistant, but who was this icon of fashion who designed the masks for Jean Cocteau's 1946 film 'Beauty and the Beast'?

Cardin moved to Paris in 1945 to work with Elsa Schiaparelli a then leading designer. Cardin was always an innovator with his first collection in 1957 introducing the world renowned bubble skirt, whilst in 1964 his collection featured cat suits and helmets, which was called 'space age'. During the 1960s he raised hemlines to four inches above the knee, while necklines plunged to the waist both at the back and front. Cardin was particularly associated with the use of knitted fabrics and spiral dresses.
4. Born in Scotland, this man went on to become the second most wealthy historical figure according to the American publishing and media company Forbes. Who was the young telegrapher who went on to make his money as an industrialist and later became a philanthropist?

The classic 'rags to riches' story was lived by Andrew Carnegie. He worked his way up in the US as a bobbin boy in a textile mill to a railway supervisor. Carnegie however, made his fortune from speculation and iron, seeking the total integration of the mining, shipping, smelting and production of steel in America.

He sold the Carnegie Steel Company in 1901 to GI Pierpont Morgan for $480 million, and distributed his wealth in the US and UK through the creation of endowments and trusts in the areas of education, world peace and teacher training.
5. Who was the man that found the tomb of the Pharaoh Tutankhamen?

In November 1922, after many seasons of largely unrewarded work at the Valley of the Kings near Thebes (Luxor) in Egypt, Howard Carter located the tomb of Pharaoh Tutankhamen. Most of the valley's tombs had been robbed in ancient times, but the tomb of Tutankhamen had preserved intact - the greatest treasure ever recovered by an archaeologist.

The find so caught the public imagination that he and his sponsor Lord Carnarvon, can be said to have begun the modern popularisation of archaeology.
6. Who was the man who held aloft a piece of paper at Heston Aerodrome claiming that he had secured 'peace for our time'?

Although an able and energetic minister of the interwar years, both as Minister of Health and Chancellor of the Exchequer, Neville Chamberlain was more often portrayed as either a naive peace lover who trusted Hitler or as a 'guilty man' unwilling to confront aggressors. Research into his life shows that his policy as Prime Minister (1937-1940) was driven by the strategic imperative to avoid war on European, Mediterranean, and East Asian fronts simultaneously, and the diplomatic need to maintain unity between Britain and the self governing Dominions. Nevertheless revelations that Chamberlain became almost obsessive about appeasement and sought to manipulate public opinion by management of the press continued to raise questions about his judgement.

In 1940 Chamberlain was held accountable for the failure to push back German forces in Norway. In parliament he was told in no uncertain terms to go, and after a back bench revolt Chamberlain had to stand down and Winston Churchill came to the fore. After a brief bout of illness, Chamberlain died of bowel cancer on 9 November 1940 at the age of 71.

The harsh verdicts on Chamberlain that became conventional wisdom, especially in the summer of 1940 generally overlook the situation that he inherited when becoming Prime Minister.
7. Who was known as the 'Georgia Peach' and was deemed as one very unlikeable guy?

Cobb was indeed known as the 'Georgia Peach', but there was nothing sweet or fuzzy about him. He was a ferocious competitor and that spirit made him arguably the greatest baseball player of all time and one of the least popular. He was known to incite opposing players with his acid tongue and his vicious spikes up slides.

As a member of the Detroit Tigers he won twelve American League batting titles in thirteen years, including a remarkable nine in a row. Three times he hit over .400. His lifetime batting average of .367 which until the start of the 2008 Major League Baseball season still stood and remained unlikely to ever be surpassed.

Despite his apparent poor qualities on the field, he was in later life a generous person; he donated money to charities such as the hospital he built in his home town, and he started a scholarship fund open to everyone. He was regarded in his playing time as a racist, but despite this, both his charitable contributions were open to all and he did embrace the inclusion of black players in the baseball leagues.
8. Born Teodor Korzeniowski in the Ukraine, this writer went on to produce literature of the highest quality. Works such as 'Heart of Darkness' (1899) and the 'The Secret Agent' (1907) inspired some of the twentieth century's finest cinematic classics such as Hitchcock's 'Sabotage' and the Vietnam classic 'Apocalypse Now'. Who was this man that turned down an honorary British knighthood?

Teodor Josef Korzeniowski, born in Ukraine, adopted the name by which he was known on the publication of his first book, 'Almayer's Folly' in 1895. He had begun writing while still working as a seaman, eventually becoming a master mariner, a life which provided the settings for most of his fiction and from which he retired to full time writing in 1894. He had become a British subject in 1886. A masterly novelist, his work remained unpopular for some years, despite the publication of, among other works, the classics 'The Nigger of the Narcissus' (1897), 'Lord Jim' (1900), 'Nostromo'(1904) and 'The Secret Agent'(1907), one of his political novels.

During this period he also co-authored 'The Inheritors'(1900) and 'Romance' (1903) with Ford Maddox Ford, and short stories, including the powerful 'Heart of Darkness'(1902), the major inspiration for the film 'Apocalypse Now'.

Popular and hence financial success eventually came with 'Chance' (1913), followed by other works, none of which were considered his best novel.

This author is one of my personal favourites and I urge anyone who plays this quiz to pick up one of his masterpieces and read.
9. Acclaimed by American viewing polls to be "the most trusted man in America". this legendary broadcasting journalist in fact dropped out of college to become a reporter, but who was the anchorman for CBS Evening News for 19 years?

Indeed Cronkite dropped out of college to cover the fighting in World War II for United Press International. He also reported on the Nuremberg War Trials after the war and in 1950 joined CBS news as a correspondent. For 19 years he was anchor for CBS Evening News (1962-1981) and became one of the most familiar and respected people in American public life.

He also published books in international relations and current affairs. Since he left CBS in 1981 he continued to write books, gave lectures and narrated documentaries.
10. Born in Warsaw, Poland in 1867, this woman moved to Paris in 1891 and later became the first female professor at the University of Paris. However, it was her work in science that brought her fame and ultimately and arguably her death. The first person ever to win two Nobel prizes, this woman worked in the field of radioactivity and isolated polonium and radium in 1902. Who was this quite amazing woman who also found time to raise two daughters and change the face of science?

Due to a lack of educational facilities in Poland, she moved to Paris in 1891 and graduated in physics from the Sorbonne in 1893. She decided to study the rays given off by uranium and its ore.

Working with her husband Pierre, whom she married in 1895, she isolated polonium and radium in 1902. For their work on radioactivity they were jointly awarded the Nobel Prize for Physics on 1903, along with Henri Becquerel.

After Pierre's accidental death in 1906, she took over his professorship in physics at the Sorbonne. She was awarded the Nobel Prize for Chemistry in 1911 for her discovery of polonium and radium, and became the first person ever to be awarded two Nobel Prizes.

With the outbreak of war in 1914 she instigated X-ray services in military hospitals. She eventually died of cancer, brought on by exposure to the radioactive elements with which she worked.
Source: Author doomed 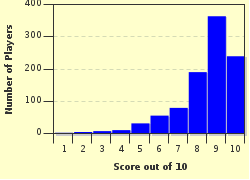 
Other Destinations
Explore Other Quizzes by doomed