Under a Black Flag Trivia Quiz

Throughout history, pirates and privateers have roamed the seas. In this quiz, only ten are presented. Enjoy!

Quiz Answer Key and Fun Facts
1. What was the name of the English explorer and privateer who first emulated Sir Francis Drake, circumnavigated the globe intentionally, returning to England having raided several Spanish ships in the Pacific Ocean?

Thomas Cavendish returned to England rich, since he had acquired a great deal of Spanish gold, silk and other treasures. After his trip, Queen Elizabeth I rewarded him with a knighthood. He promptly set out to repeat his exploits, but was unfortunate and he was killed at the sea in 1592, only 31 years old.
2. What was the name of the English privateer who was the chief instrument in the defeat of the Spanish Armada in 1588 and was said to have been wanted dead by King Phillip II of Spain so badly, that a reward of 20,000 gold ducats was placed on his head?

Drake's legacy is indeed controversial, for while the Englishmen consider him a hero, the Spaniards do not entertain a good opinion of him. He was given a knighthood by Queen Elizabeth I in 1581. Five years after defeating the Spanish Armada, he tried to capture the city of San Juan in Puerto Rico but he was killed and the operation failed.
3. Cornelis Jol was a Dutch corsair. He had the nickname "Houtebeen". What does it mean? (Hint: think of an article associated with pirates in popular culture)

Cornelis Jol was one of the first pirates known for having a wooden leg. He was active in the Eighty Years' War, which pitted his country, the Netherlands (then known as United Provinces), England, France and Nassau against Spain and the Holy Roman Empire. Jol's most famous contribution to the war which earned his country its freedom was his being a commander at the Battle of the Downs, where the Spanish were crushed.
4. Johannes van Walbeeck was an admiral of the Dutch West India Company and acted as a pirate against the Spaniards. He was also the first governor of a Dutch colony in the Caribbean. Which one?

There are may things unknown to us about Walbeeck, such as the exact date and place of his birth. As governor of the Netherlands Antilles, his first task was to build the fortress known today as Fort Amsterdam. Under his guidance the beginnings of the town of Willemstad were constructed.
5. Apart from being a privateer, William Dampier was also the first Englishman to explore parts of which country?

After Dampier returned from his voyage to Australia, he was court-martialed for cruelty and was jailed. But, when the War of Spanish Succession began in 1701 he was given a second chance and thus began his privateering career. Despite his initial successes, he failed to capture the Manilla galleon Nuestra Senore de Rosario.

His ship was severly damaged and he had to board a captured Spanish prize. He was thrown in prison by his Dutch allies by mistake, but was later released.
6. Henry Morgan was a privateer for England and was considered a pirate only by the Spanish. However, he was not English. What was his nationality?

In Welsh, his name was Harri Morgan. The magazine "Forbes" has put him in the "Top Ten Earning Pirates" list. His wealth, by the early 21th century's standards exceeds ten billion US dollars. He was also Lieutenant Governor of Jamaica, the place of his death.
7. Anne Bonny is one of the most famous pirates ever, but did she ever command a ship?

Not much is known of Bonny's life. She may have been born in 1701 or 1702 and her nationality was Irish. The ship she used for her pirate activities, the "Revenge", was captained by her lover and later husband, John Rackham. It is known that, after being captured by the English, she "pled her belly" to delay her execution, but nothing is known of her after that action.
8. Mary Read is known to have been a companion of Anne Bonny and for "pleading her belly" in court to delay her execution, but what was the cause of her death?

It is possible that Read died while she was still pregnant, because no record concernng the death of her baby have been found. As with Anne Bonny, not much is known about the life of Mary Read. The date of her birth is disputed among historians because her biographer, Capt. Charles Johnson, makes a reference to the Treaty of Ryswick, whch some scholars interpret as an error and believe that he meant to refer to the Treaty of Utrecht.
9. I fear that, so far, we have overlooked piracy in Antiquity. A known pirate of the Roman era was Anicetus. He led an uprising in Colchis in 69 AD against which Roman Emperor?

The uprising of Anicetus began with the destruction of the Roman fleet in Colchis by the rebels of Anicetus, who were supporters of Vitellius, a rival of Vespasian. The rebels then turned to piracy. However, the insurrection was soon put down. Anicetus was located and captured by the Romans and put to death.
10. We know that the French-American pirate Jean Lafitte helped the Americans in the War of 1812, but in which battle did he play a crucial role?

For his actons in the Battle of New Orleans, Lafitte and his pirates earned a full pardon from the US on behalf of General Andrew Jackson. After the War of 1812, Lafitte offered his services to Spain during the Mexican Revolutionary War. His center of operations was Galveston Island, which was, back then, outside US territory and largely uninhabited.

He left the island in 1821, after one of his ships mistakenly had attacked a US merchant ship.
Source: Author DeepHistory 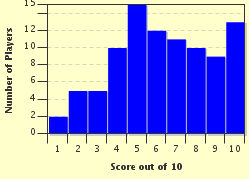 Related Quizzes
This quiz is part of series Dusk in Photo Quiz Land:

The final group of my photo quizzes is here!


1. Underrated or Overexposed? Average
2. A Jungle of Wisdom or A Forest of Sagacity Average
3. After All, It's Only a Part of Europe Average
4. Ten Shades of Orange Average
5. Under a Black Flag Average
6. Profiles Under Courage Tough