This quiz is dedicated to my loveable larrikin nephew Wayne. The questions are related to people who have their first or last name as Wayne! Good luck!

Share on Facebook
Share on Twitter
Share by E-Mail
Author
soozy_woozy
Time
4 mins
Type
Multiple Choice
Quiz #
269,074
Updated
Dec 03 21
# Qns
10
Difficulty
Average
Avg Score
7 / 10
Plays
1385
This quiz has 2 formats: you can play it as a or as shown below.
Scroll down to the bottom for the answer key.

Quiz Answer Key and Fun Facts
1. "Wayne's World" is a 1992 movie, starring Mike Myers, who also wrote this musical comedy. One of the taglines for the movie is "You'll laugh. You'll cry. You'll hurl". What is Wayne's surname?

A TV executive hired Wayne and Garth for his own downtown network and it was here that Wayne fell in love with a heavy metal band guitarist called Cassandra. Benjamin Kane, who was played by Rob Lowe, tried to ruin their show so that he could have the girl for himself.
2. Which famous hockey player always tucked the right corner of his jersey in his pants and had the nicknames "The Great One" and "The White Tornado"?

Many consider Wayne Douglas Gretzky to be the greatest hockey player of all time. He was born on January 26, 1961, in Brantford, Ontario, Canada. Wayne is married with five children and his wedding was broadcast live throughout Canada. He holds 61 NHL records and has been named the league's MVP a record nine times.

He retired after the 1998-99 season and has been named the NHL's "Most Gentlemanly Player". After retiring, his trademark jersey No.99 was retired by the NHL.
3. This man is a famous Las Vegas entertainer, whose signature song is "Danke Schoen". He is known as the highest paid singer in the world and he is called Mr Las Vegas.

Wayne Newton was born on April 3, 1942, in Roanoke, Virginia. His signature song "Danke Schoen" was released in 1963 and has been a permanent part of his act ever since. In 1999, he signed a 10-year performance contract with the Stardust Hotel in Las Vegas and has set a record as the highest paid nightclub performer in history. Newton raises Arabian horses and is a practiced martial artist. He has appeared in many movies such as "National Lampoon's Vegas Vacation" in 1997, as well as TV shows such as "Bonanza", in 1959.

An interesting tidbit: Newton spells the name of his song as "Danke Schoen", but in fact the correct German spelling is either "danke schön" means "thank you" (as a phrase) or "thank you" (as a noun), in which case it is spelled "(ein) Dankeschön".
4. This Australian golfer is a well-respected commentator and after-dinner speaker. He has a trademark swing called "The Grades", which he has used for over 30 years. What is his name?

Wayne Grady was born on July 26, 1957, in Brisbane Australia. He turned professional at the tender age of 16 and in 1989 won his first PGA Tour. In 1990 he won the PGA Championship at Shoal Creek, Austin, with a three-stroke lead over Fred Couples. He is one of only eight Australians to have won a major golfing title and is best known for his win in Austin.

His trademark golf swing has an exaggerated pause at the top, which is called "The Grades" and this technique that has been used for most of his golfing career.

At present he owns a golf course design business and a golf touring company.
5. Many sisters have shared the limelight on TV and in movies. What are the first names of "The Wayne Sisters", who have both played a part in the popular TV series called "Bewitched"?

Carol and Nina Wayne are two sisters who starred in movies and TV series throughout the 1960s. Carol was born on September 6, 1941 and Nina was born on 18th September 1943, in Chicago Illinois. Carol also starred in "The Man from U.N.C.L.E.", "I Spy" and "I Dream of Jeannie".

Her most famous TV role was as the Tea-Time/Matinee Lady on "The Tonight Show" with Johnny Carson. Her famous ex-husband, Burt Sugarman, produced "Children of a Lesser God" and "Crimes of the Heart". Carol died in mysterious circumstances whilst on holiday in 1985, some people suspecting her boyfriend of murdering her.

The younger of the sisters, Nina, slipped out of Hollywood in the 1970s after starring in "Camp Runamuck". She also starred alongside Harrison Ford in "Dead Heat on a Merry-Go-Round" in 1966.
6. Many people become famous and achieve great accomplishments in life, even though their childhood has been everything but perfect. Which famous doctor is considered to be the "Father of Motivation" and was the author of "Your Erroneous Zones"?

Dr Wayne Dyer is considered by many to be the "Father of Motivation". He is a famous writer and speaker in the field of self-improvement and self-empowerment. His first book is called "Your Erroneous Zones" and it has been translated in many languages all over the world.

He has appeared on many TV shows such as "Oprah", "The Today Show", and "The Tonight Show". A worldwide traveler, he conducts many workshops and gives motivational lectures. One of three boys, he suffered abuse and abandonment from an alcoholic father, who did not pay support to his family.

His mother worked as a Candy Girl, but couldn't earn enough money to support her three boys. The boys were given up for foster care until their mother remarried and could support them once again. Dr Dyer is married with eight children and lives in South Florida and Hawaii.
7. This rapper/songwriter was named by MTV as being the "Hottest MC In the Game", in 2007. When he was a young boy he accidentally shot himself with his stepfather's gun. Who is he?

Dwayne Michael Carter, Jr., was born on September 27, 1982, in New Orleans, Louisiana. He is the president of the New Orleans-based label Cash Money Records and CEO of Young Money Entertainment. He grew up as an only child in the New Orleans neighbourhood called Hollygrove, where he started rapping at block parties.

It was at one of these parties that Lil' Slim, a Cash Money rapper, saw his performance and invited him to an autograph signing session. In 1997 he formed a band called the "Hot Boys" and together with Juvenile, Turk and Lil' Doogie, released a very successful CD called "Get It How You Live'.

After going solo, Lil' Wayne released "Tha Carter" which was a personal milestone for him, because it established him as a talented lyricist.

He has been arrested for drug possession and has been accused of stealing other performer's song lyrics. He drew a lot of media attention when a picture was released of him kissing Bryan "Baby" Williams. He has a daughter and he has been romantically linked to female rapper Trina.
8. This superhero's name would imply that he was related to the Chiropteran mammal group. He fights crime and is not amused by his humoursome adversary called "The Joker". By what name would the people in Gotham City know this fearless crime fighter (if they knew who was behind the mask)?

Bruce Wayne is the alias for "Batman", the comic strip, movie and series character. Bruce is a wealthy industrialist, playboy and philanthropist, whose mother and father were killed by a mugger when he was a young boy. In the late 1930s, the character of Batman was by artist Bob Kane and writer Bill Finger. Batman doesn't possess any superhuman powers, but uses his wealth, intelligence, martial art ability, science and technology to fight his war on crime. Kane chose the name "Bruce" from "Robert Bruce" (the Scottish patriot) and Finger chose the name "Wayne" from "Mad Anthony Wayne" (a Revolutionary War general).

The costume Batman wears was used to incorporate the imagery of a bat, in order to frighten criminals. Batman has appeared in comic strips, books, radio dramas, and television and theatrical feature films.
9. Famous movie stars are remembered by their looks, mannerisms and acting ability. One star is remembered for his particular walk, height and voice, which may have been due to smoking five packets of cigarettes a day. Do you remember his name?

John Wayne was born on May 26, 1907, in Winterset, Iowa. His real name was Marion Robert Morrison, and he was also known as the "Duke". John Wayne was of Scottish-Irish descent and he was an Academy Award-winning American film actor. He started in silent movies in the 1920s and his movies were mainly Westerns and World War 11 epics.

While at University he worked for a local film studio, where he was offered bit parts by his director friend John Ford. Some of his movies include "French Foreign Legion", "The Three Musketeers", "The Green Berets" and "The Man Who Shot Liberty Valance".

He was married three times, divorced twice and has seven children. In 1964, he developed lung cancer, which was successfully operated on. He died on June 11, 1979, at the age of 72.
10. On October 19, 2002, this famous English footballer scored the winning goal against title-holders Arsenal, ending their 30-match unbeaten run. What is his name?

Wayne Rooney was born on October 26, 1985, in Liverpool, England. He is seen by many as having the most exciting prospects of the modern game of football. He grew up supporting Everton, his hero being Duncan Ferguson and he used to wear a T-shirt, which read "Once a blue, always a blue".

He played two seasons for Everton before transferring to Manchester United, who paid him a fortune to do so. Since 2002, his on and off-field fighting has kept him in the spotlight. He is the third highest rated football player behind Ronaldinho and David Beckham and he has lucrative contracts with Nike, Nokia, Ford and Coca-Cola.
Source: Author soozy_woozy

This quiz was reviewed by FunTrivia editor DakotaNorth before going online.
Any errors found in FunTrivia content are routinely corrected through our feedback system.
Most Recent Scores
Dec 04 2022 : Andyboy2021: 10/10
Dec 01 2022 : Hayes1953: 7/10 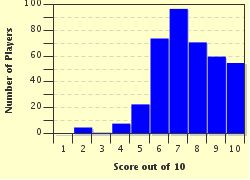 Related Quizzes
1. Famous Toms Easier
2. "Y" These People Stood Out? Easier
3. It Was the Best of Tims... Average
4. Every Tom, Dick, and Harry: Tom Edition Easier
5. Where There's a Will Easier
6. Are they William, Willie or Bill? Easier
7. Every Tom (But Not Dick or Harry) Easier
8. Is it Thomas, Tom or Tommy. Very Easy
9. Victor/Victoria Easier
10. Who Am I? Walter, Walt or Wally Easier
11. May I Have the Bill, Please? Tough
12. Thomas, A Man For All Seasons Easier


Other Destinations
Explore Other Quizzes by soozy_woozy