This quiz takes a look at ten different women in the Old Testament, excluding Genesis. Your challenge is to correctly match the ten statements with the women. (The NKJV and the NIV were used for this quiz.)

Bathsheba is the correct answer. Her first child, the result of an adulterous affair with David, died shortly after birth. According to Scripture, the boy was never named. The account of the boy's death can be found in 2 Samuel 12:15-23.

Going by Scripture, the infant appears to have never been named. If he was named by David and Bathsheba, there is no indication in Scripture.

According to notes in the NKJV Study Bible, it is possible the child was less than eight days old "as the baby seems to have not lived long enough to be named. Normally, a child would be named at the time of circumcision, the eighth day." (Luke 1:59) With this said, there is actually no way of determining the baby's age at the time of death as Scripture is short of precise details.

Nathan the prophet declared the baby would die as punishment for the fact David had committed adultery with Bathsheba and then orchestrated the murder of her husband Uriah. It seems the reason David was not stuck dead by God is the fact he confessed to Nathan he was guilty of sinning before the LORD. (A fuller confession of Davd's guilt appears in Psalm 51.)

2 Samuel 12:13-20, in the NKJV, states: "So David said to Nathan, 'I have sinned against the LORD.' And Nathan said to David, 'The LORD also has put away your sin; you shall not die. However, because by this deed you have given great occasion to the enemies of the LORD to blaspheme, the child also who is born to you shall surely die.' Then Nathan departed to his house. And the Lord struck the child that Uriah's wife bore to David, and it became ill. David therefore pleaded with God for the child, and David fasted and went in and lay all night on the ground. So the elders of his house arose and went to him, to raise him up from the ground. But he would not, nor did he eat food with them. Then on the seventh day it came to pass that the child died."

Later, David and Bathsheba would become parents of Solomon.
2. Find the match for the woman who pulled strings behind the scenes to orchestrate the death of Naboth. (1 Kings 21)

Naboth was killed simply because of the greed of Jezebel and her husband Ahab. Naboth's story is told in the 21st chapter of 1 Kings.

Scripture states Naboth was a Jezreelite and his vineyard was in Jezreel, close to the palace of Ahab king of Samaria. I Kings 21:9-10 reports about Jezebel ordering letters be sent to elders and nobles in Naboth's city. The letter, in the NKJV Bible, states: "Proclaim a fast, and seat Naboth with high honor among the people; and seat two men, scoundrels, before him to bear witness against him, saying, 'You have blasphemed God and the king.' Then take him out, and stone him, that he may die."

Sure enough, Jezebel would have her way and her husband would assume ownership of the vineyard.

According to Scripture, Ahab had sulked on his bed, turned away his face and refused to eat as he was so depressed when Naboth had declined his offer to buy the vineyard. 1 Kings 21:2 states Ahab simply wanted Naboth's property to use as a vegetable garden.
3. Find the match for the woman who donated a vast array of food items to David and his fighting men. (1 Samuel 25:18)

Abigail assembled a massive package of food and presented it to David to prevent him from attacking her husband Nabal. 1 Samuel 25 states Nabal was extremely rude to ten of David's men with the end result being David was planning to attack Nabal.

Scripture states Abigail caught wind of David's plans and assembled a massive array of food to present to him as a peace offering.

1 Samuel 25:18, in the NKJV, states: "Then Abigail made haste and took two hundred loaves of bread, two skins of wine, five sheep already dressed, five seahs of roasted grain, one hundred clusters of raisins, and two hundred cakes of figs, and loaded them on donkeys."

Scripture states that after Abigail presented her gifts to David, he had a change of heart and decided not to attack Nabal.

Later, Abigail would become David's wife when Nabal died. Scripture has nothing but nice things to say about Abigail, portraying her as beautiful, wise and gracious. It's a different matter for her first husband, however. Nabal is portrayed as being foolhardy and an obstinate man. In fact, his name means 'fool', according to 1 Samuel 25:25.
4. Find the match for the woman who was sexually assaulted by her half brother. (2 Samuel 13)

Tamar was sexually assaulted by her half brother Amnon. David was the father of the two individuals while Tamar's mother was Maacah and Amnon's mother was Ahinoam.

According to Scripture, Amnon lusted greatly for Tamar and devised a ruse to take advantage of her.

2 Samuel 13 tells of Amnon pretending to be sick in bed and when Tamar brought him some food, he forced himself upon her. The chapter goes on to tell of Absalom, the full brother of Tamar, killing Amnon to exact revenge.
5. Find the match for the woman Adonijah was hopelessly in love with. (1 Kings 2:17)

According to Scripture, Adonijah was hopelessly in love with Abishag, a beautiful young woman who had been assigned to care for David in his elderly years. Following the death of his father, Adonijah took action to make Abishag his wife, but it would cost him his life.

Scripture states Adonijah requested Bathsheba to get permission from her son Solomon for the marriage. (Solomon had just replaced his father David as king.) However, when Bathsheba approached Solomon about the matter, it appears to have been the final straw.

1 Kings 2:23-25, in the NKJV Bible, states: "Then King Solomon swore by the LORD, saying, 'May God do so to me, and more also, if Adonijah has not spoken this word against his own life! Now therefore, as the LORD lives, who has confirmed me and set me on the throne of David my father, and who has established a house for me, as He promised, Adonijah shall be put to death today!' So King Solomon sent by the hand of Benaiah the son of Jehoiada; and he struck him down, and he died."

Previously, Adonijah had attempted to replace his father David as king, but lost out to Solomon when Bathsheba intervened. Notes in the NKJV Study Bible suggest Adonijah's request came with serious ramifications. "Taking a member of the king's harem would normally be interpreted as a claim to the throne," the notes state.

While Abishag was a member of David's harem, many Bible scholars believe she became one of Solomon's wives/concubines after he ascended to the throne.
6. Find the match for the woman who almost became the mother of the king when her son staged a bloodless coup. (1 King 1:5-27)

Haggith is the correct answer. According to 1 King 1, her son Adonijah had staged a bloodless coup and had set himself up as king when David was old and in failing health.

Bathsheba and Nathan the prophet, however, intervened behind the scenes with the end result that Solomon became king. Bathsheba, of course, was Solomon's mother.

Had Adonijah become king, Haggith would have been the most powerful woman in Israel. In Biblical times, the mother of the king was held in higher esteem than any other woman.

However, not much is known about Haggith as she is mentioned in passing reference.
7. Find the match for the wife of David who was captured by the Amalekites. (1 Samuel 30:5)

Ahinoam and Abigail, two wives of David, were captured by the Amalekites, according to 1 Samuel 30. In addition to the two women, the Amalekites took an unspecified number of Isrealites captive, Scripture states.

After being held captive for an unspecified time period, Scripture tells of David and his men staging a surprise attack on the Amalekites and freeing the two women as well as the other captives.

Zeresh was the wife of Haman, the man who had a diabolical plot to kill all the Jews in the vast area ruled by Ahausures. (In the NIV, Aushsures is known as Xerexs.)

According to Scripture, it was Zeresh who suggested to her husband that he should build a hanging gallows fifty cubits high for the express purpose of executing Mordecai, the cousin of Queen Esther. (See Esther 5:10-14)

The advice backfired big time with Haman being hanged on the very gallows he had built to kill Mordecai.
9. Find the match for Mordecai's cousin.

According to Esther 2:7 in the NKJV, Esther was Mordecai's uncle's daughter, which would've made her his cousin. (The NIV simply describes her as Mordecai's cousin.) According to Scripture, Esther was an orphan and Mordecai raised her after her parents died. No information is given in Scripture about the cause of death of Esther's father and mother.

Esther and Mordecai, of course, teamed up to prevent Haman from carrying out a diabolical plan to kill all the Jews in the vast kingdom ruled by Ahasuerus. In the NIV, he is known as Xerxes.
10. Find the match for Ruth's mother-in-law.

Naomi was the mother-in-law of Ruth, according to Ruth 1. Scripture states Ruth was married to Naomi's son Chilion while a second son Mahlon was married to Orpah. (In the NIV, Chilion is called Killion.) Both Ruth and Orpah were from Moab.

According to Scripture, Naomi's husband Elimelek as well as her two sons died, and the three women were widows.

Later, Ruth would marry Boaz and their marriage resulted in the birth of Obed, according to Ruth 4:17. The same verse states Obed would become the grandfather of King David.
Source: Author Cowrofl 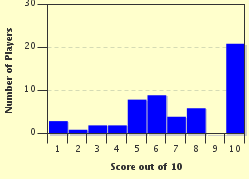