A Quick Look at Ten Women in the Gospels Quiz

This quiz takes a look at ten different women featured in the Gospels of Matthew, Mark, Luke and John. Your challenge is to correctly match the ten statements with the ten women. (The NKJV and the NIV were used for this quiz.)

Quiz Answer Key and Fun Facts
1. Find the match for the woman who fled to Egypt with her husband and her infant son. (Matthew 1:16)

According to Scripture, Mary and her husband Joseph, along with the infant Jesus, fled to Egypt after Joseph was told to take such action in a dream. Scripture states Herod was a ruthless king and he would do anything to maintain his grasp on power. In fact, he came up with a diabolical plan to kill all males aged two years and under in Nazareth and area to make sure the Infant Jesus would not grow up and replace him as king. To ensure Jesus' survival, Joseph was advised in a dream to flee to Egypt with his family. Joseph had the dream shortly after the Magi, or Wise Men from the east, departed after presenting gifts to Jesus.

Matthew 2:13-15, in the NKJV, states: "Now when they [the Magi] had departed, behold, an angel of the Lord appeared to Joseph in a dream, saying, 'Arise, take the young Child and His mother, flee to Egypt, and stay there until I bring you word; for Herod will seek the young Child to destroy Him.' When he arose, he took the young Child and His mother by night and departed for Egypt, and was there until the death of Herod, that it might be fulfilled which was spoken by the Lord through the prophet, saying, 'Out of Egypt I called My Son.'"
2. Find the match for the woman who was a follower of Jesus and who had a husband who served as a steward for Herod. (Luke 8:3)

Not much is known about Joanna as she is mentioned in passing reference. Luke 8:3 states she was the wife of Chuza who served as a steward for Herod. Similar to many other women, Joanna provided financial support to Jesus, the same verse states. This is the only mention of Joanna in Scripture.
3. Find the match for the woman who was worried about the stench that would come from Lazarus' tomb if the stone was rolled away. (John 11:39)

Martha, according to Scripture, was concerned that when the stone was rolled away from her brother Lazazus' tomb, there would be a vile stench. She had valid reasons for her concerns because Lazarus had been dead for four days in the hot Mediterranean sun. Her concern about an odor emanating from the tomb quickly gave way to total amazement and ecstasy when Christ commanded Lazarus to rise from the tomb and he did just that!

Here's how the miracle is reported in John 11:38-44 in the NKJV:
"Then Jesus, again groaning in Himself, came to the tomb. It was a cave, and a stone lay against it. Jesus said, 'Take away the stone.' Martha, the sister of him who was dead, said to Him, 'Lord, by this time there is a stench, for he has been dead four days.' Jesus said to her, 'Did I not say to you that if you would believe you would see the glory of God?' Then they took away the stone from the place where the dead man was lying. And Jesus lifted up His eyes and said, 'Father, I thank You that You have heard Me. And I know that You always hear Me, but because of the people who are standing by I said this, that they may believe that You sent Me.' Now when He had said these things, He cried with a loud voice, 'Lazarus, come forth!' And he who had died came out bound hand and foot with graveclothes, and his face was wrapped with a cloth. Jesus said to them, 'Loose him, and let him go'."
4. Find the match for the woman who anointed Jesus with expensive perfume. (John 12:3)


Answer: Mary the sister of Lazarus

Mary, the sister of Lazarus and Martha, anointed Jesus with a "very costly oil of spikenard', according to Scripture. The anointing took place at a supper in Bethany after Jesus had raised Lazarus from the dead.

Here's how John 12:1-3 reads in the NKJV:
"Then, six days before the Passover, Jesus came to Bethany, where Lazarus was who had been dead, whom He had raised from the dead. There they made Him a supper; and Martha served, but Lazarus was one of those who sat at the table with Him. Then Mary took a pound of very costly oil of spikenard, anointed the feet of Jesus, and wiped His feet with her hair. And the house was filled with the fragrance of the oil."

Scripture goes on to tell of Judas Iscariot being indignant about the display of affection, claiming the fragrant oil, or perfume, should have been sold for three hundred denarii and the proceeds given to the poor. Footnotes in the NKJV Study Bible state three hundred denarii was the equivalent of about one year's wages for the average worker.

John 12:6 claims Judas was not sincere about helping the poor: "This he said, not that he cared for the poor, but because he was a thief, and had the money box; and he used to take what was put in it."
5. Find the match for the woman who had a dream prior to Jesus being crucified. (Matthew 27:19)

Pilate's wife was troubled by a dream she had about Jesus and passed the information onto her husband. Matthew 27:19 in the NKJV states: "While he [Pilate] was sitting on the judgment seat, his wife sent to him, saying, 'Have nothing to do with that just Man, for I have suffered many things today in a dream because of Him.'" She made the request just prior to her husband giving in to the crowd and ordering the execution of Jesus.

The world would never be the same.
6. Find the match for the woman who is GENERALLY BELIEVED to be the mother of James and John.

It is believed Salome was the wife of Zebedee and the mother of James and John, two of the original Twelve Disciples.

The mother of James and John is noted for requesting Jesus that her two sons sit in places of honor in the kingdom, as per Matthew 20:20-21.
7. Find the match for the woman, who after seeing the baby Jesus, proclaimed He would give redemption to the people of Israel. (Luke 2:36-38)

Anna is the correct answer. After Jesus was presented as an infant at the temple by his parents Mary and Joseph, Scripture states Anna "gave thanks to the Lord, and spoke of Him to all those who looked for redemption in Jerusalem." According to Luke 2:37, she was the daughter of Penuel, of the tribe of Asher, and was of "great age" and a widow. Verse 37 also states Anna "did not depart from the temple, but served God with fastings and prayers night and day."
8. Find the match for the woman who secretly touched Jesus and was healed of a bleeding disorder. (Mark 5:28)


Answer: No name given

No name is given for the woman who secretly touched Jesus and was healed of a bleeding disorder.

No one, it seems, could heal her. The Bible isn't precise, but it's abundantly apparent the woman had seen a number of doctors. Mark 5:26 states she had spent all her money on "many" doctors, but the condition continued to worsen, instead of improving. Things changed, however, when the woman secretly touched Jesus and, as Scripture states, was "immediately" healed.

According to Scripture there were numerous occasions when people were healed by simply touching Jesus. In the NKJV Bible, Mark 6:56 puts it this way: "Wherever He entered, into villages, cities, or the country, they laid the sick in the marketplaces, and begged Him that they might just touch the hem of His garment. And as many as touched Him were made well." There is a similar account in Matthew 14:34-36.
9. Find the match for the woman who experienced a "great earthquake". (Matthew 28:1-2)

Mary Magdalene is the correct answer. According to Scripture, there was a "great earthquake" when she went to Jesus' tomb on the Sunday morning after the crucifixion. (The NIV states there was a "violent earthquake".)

Little information is given about the earthquake, however. Matthew 28:1-4 states: "Now after the Sabbath, as the first day of the week began to dawn, Mary Magdalene and the other Mary came to see the tomb. And behold, there was a great earthquake; for an angel of the Lord descended from heaven, and came and rolled back the stone from the door, and sat on it. His countenance was like lightning, and his clothing as white as snow. And the guards shook for fear of him, and became like dead men."

Scripture goes on to tell of Jesus appearing to the two women and they responded by worshiping Him.
10. Find the match for the woman who was related to the mother of Jesus. (Luke 1:36)

According to Luke 1:36, Elizabeth was a relative of Mary, the mother of Jesus, but no further details are given. It is generally perceived Elizabeth was Mary's aunt, which would make John and Jesus cousins. There are various Websites which offer different views on the relationship of Elizabeth and Mary. Some suggest Elizabeth was a cousin of Mary, not an aunt. Other possibilities are also offered. However, tradition holds John and Jesus were cousins.

Elizabeth was married to Zacharias and according to Luke 1:5-80, they were the parents of John the Baptist. (In the NIV, Zecharias is known as Zachariah.)

Elizabeth gave birth to John the Baptist even though she and her husband were both "very old", according to the first chapter of Luke. Luke 12:5 states Elizabeth was a descendant of Aaron. Meanwhile, Luke 1:39-45 tells of Elizabeth meeting with Mary, the teenage virgin girl who was pregnant with Jesus. The two were relatives and their offspring would change the course of history.
Source: Author Cowrofl 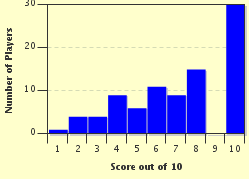 Related Quizzes
1. The Sons of Jacob Easier
2. Hebrews: The Biblical Hall of Faith Easier
3. Notable Births in the Bible Average
4. The Kindness of a Stranger Easier
5. But They Seemed Like Such Nice People! Average
6. A Quick Look at Ten Women in Genesis Average
7. Oh Baby! A Bible Quiz About Infants and Children Average
8. Brave or Maybe Not so Much Average
9. Unmarried and/or Celibate Bible People Average
10. A Quick Look at Ten Old Testament Women -- #1 Average
11. Biblical Characters At A Disadvantage Average
12. Handmaidens, Servants and Slaves in the Bible Average