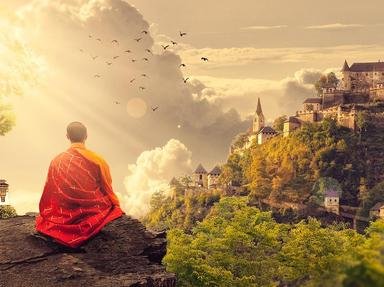 Here's a quiz on basic facts about Buddhism. Have fun!

Quiz Answer Key and Fun Facts
1. What was the real name of the founder of Buddhism?

Shakyamuni was also a name appointed to Buddha. He was a prince of the Shakya family.
2. Which of the following is a popular form of Buddhism in Japan?

Zen Buddhism arrived in Japan from China, where it is called 'Chan'.
3. The Buddhists believe in following a path to enlightenment. How many fold is this path?

The eight-fold path includes various moral stances that a practitioner of the religion ought to follow.
4. A Sanskrit word meaning 'action' or 'fate', a lot of people equate it to 'what goes around comes around'. What is this term?

It is said that the karma you acquire in one life will affect the results of your next life!
5. When a Buddhist individual reaches enlightenment, it is said that they reach a certain state that can be literally translated as 'snuffing out'. What is this state?

Aside from being a cool grunge rock group, Nirvana is the ultimate goal of the devout Buddhist.
6. Buddhism is the religion of a substantial portion of the population of which of the following countries?

Bhutan is an entirely Buddhist country tucked into the Himalayas. None of the other countries mentioned have a reasonably large number of Buddhists among their populations. Bhutan sits between India and China.
7. Buddhism shares its roots with what other major world religion?

Many of the ideas and tenets of Buddhism were drawn from the more ancient south Asian religion called Hinduism.
8. Buddhism had a difficult time catching on in China. Which of the following is a major reason why?

In China, the family is sacred according to the Confucian tradition. This Buddhist doctrine ran directly against the grain of Confucian morality and was hence not well accepted amongst many Chinese.
9. What leader of Buddhist Tibet fled into exile after the communist Chinese invaded Tibet, conquered it, and put down an uprising during the 1950s?

You can see a version of the Dalai Lama's story by watching the wonderful film 'Kundun', directed by Martin Scorsese.
10. Which of the following is Buddha also known as?


Answer: The enlightened one

The name 'Buddha' means 'enlightened one', as a matter of fact!
Source: Author thejazzkickazz 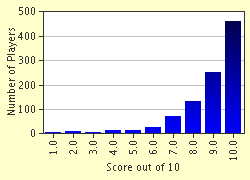