Why do some folks do such bad things? Let's examine ten big-time baddies from the Bible. This quiz was compiled using the Revised Standard Version (RSV). Author Challenge title given by poshprice.

Quiz Answer Key and Fun Facts
1. Who is the first murderous villain to appear in the Bible?

In Genesis, chapter 4, we learn of Cain's murderous rage toward his brother. Cain was jealous that Abel gained more favor with God, took his brother out into the field and killed him. When God asked where his brother was, Cain uttered a phrase we still use to this day, "Am I my brother's keeper?"

The worst I ever did out of jealousy toward my brother was split his lip. I still feel a little guilty about that now, some thirty years later.
2. The very first villain in the Bible appears in Genesis, chapter 3. Who is this cunning baddie?

The serpent told Eve that if she ate of the fruit from the tree in the midst of the garden, she would be like God and would know good from evil. Seeing that the fruit from this tree would make her wise, Eve ate and encouraged Adam to do so as well, thus condemning mankind to a life outside of the Garden of Eden.

When questioned by God, Adam points the finger at Eve, who in turn blames the serpent.

Eve has long been blamed for getting us thrown out of the garden, but in Genesis 2:16-17, God tells Adam, not Eve, that he should not eat the fruit. I say it's all Adam's fault.
3. Which great Hebrew king sent a soldier to his death in order that he might take the man's wife?

Spying Bathsheba bathing outdoors, David had to have her for his own. Upon learning that she had become pregnant, David told her soldier husband Uriah to go home, hoping that they would have relations with one another and Uriah would assume the baby was his own. Uriah didn't go home, though, thinking it unfair that he should enjoy the comforts of home while his soldiers weren't allowed the same.

David then had Uriah sent to the front lines, practically guaranteeing that he would be killed. David took Bathsheba as one of his own wives.

This is one reason I don't bathe in the yard.
Their story can be found in 2 Samuel, chapter 11.
4. Upon selling a plot of land, Ananias and his wife Sapphira presented the money to the apostles for the use of the early church. Secretly withholding a portion of the money for themselves, they were confronted by the apostle Peter. What fate befell Ananias and Sapphira for their lie?


Answer: They were struck dead

The first followers of Jesus held their possessions in common, in order that the group could use what they had for the good of the entire group.
When the money from the sale of the property was presented to the apostles, the couple did not donate the entire amount, as they asserted, but instead held some back for themselves.

Peter stated that Ananias was in control of the money and that he could keep or give it as he saw fit, but had withheld a part of it. Peter said that Ananias had lied not to men, but to God himself. Ananias died there on the spot and was carried out for burial.

A few hours later, his wife Sapphira entered. Not knowing her husband's fate, when questioned by Peter, she stated that the money donated was the full purchase price of the property. She, too, fell dead on the spot.

Moral of the story - you can't lie to God. He knows it all.
Ananias and Sapphira's story can be found in Acts 5:1-11.
5. This queen had an innocent vineyard owner killed so his land could be confiscated by the king. Who is this villainess whose body was trampled by horses and consumed by wild dogs?

Jezebel sowed an evil wind and reaped the whirlwind. A woman truly rotten to the core, she died a most fitting death, thrown from the tower walls to be trampled beneath the feet of horses, her body consumed by wild dogs.

To this day, her name is used as insult.

You'll find her story in 1 Kings, chapters 18-21.
6. When Mordecai would not bow to him, which villain convinced King Ahasuerus to pass a law that would allow him to kill not only Mordecai, but all the Jews?

The book of Esther, chapters 3 through 9, tells us the story of Haman. Queen Esther, herself a Jew, used her influence with the king to intercede for her people.

This is a great story of good triumphing over evil.
7. Matthew, chapter 27, gives us a man who earned the title of villain not through his action, but his inaction. Who, in the words of The Rolling Stones, "Washed his hands and sealed his fate"?

Pilate, the Roman prefect of Judea, gained his villainy by washing his hands before the crowd roaring for the crucifixion of Jesus, saying "I am innocent of this man's blood; see to it yourselves."

The Gospels suggest that Pilate knew Jesus was innocent but was forced to condemn him by the unruly crowd of religious leaders and spectators. It is also possible that Pilate simply didn't care what happened to Jesus, seeing him as just another Jew.

The Rolling Stones sang the line about Pilate in their great song "Sympathy for the Devil."
8. Which Bible baddie was so troubled at the idea of the birth of the King of the Jews that he ordered the massacre of all boys under the age of two in Bethlehem and the surrounding vicinity?

King Herod (Herod the Great) is said to have been a cruel, power hungry ruler who would destroy anyone he felt might topple him from his throne. When the wise men came to Jerusalem, they asked where they could find the newly born King of the Jews so they could worship him. Herod told the men to send word back to him when they found the child so he could worship the babe, too.

The wise men were warned in a dream not to return to Herod, and went home by another way. Herod, fearing that the child Jesus might usurp his throne, ordered the massacre of all little boys under the age of two in and around Bethlehem.

This story can be found in Matthew, chapter 2.
9. Which Biblical baddie asked for, and received, the severed head of John the Baptist?

Mark 6:7-29 tells us of Herodias' daughter Salome, who greatly pleased her stepfather, King Herod Antipas, by dancing for him and his guests. Herod promised her anything she asked for. After consulting her mother, Salome asked Herod for the head of John the Baptist, currently being held prisoner.

Because he made this promise in front of his guests, Herod was compelled to honor her request, and had John the Baptist killed immediately.

Seems to me that Herod Antipas should have taken a page from my father's book and told his daughter "no" once in a while.
10. Which man exchanged his place as one of Jesus' trusted apostles for the title of Betrayer, making him the baddest baddie in the Bible?

Judas Iscariot was one of the original 12 apostles, and part of Jesus' inner circle. He colluded with the authorities so Jesus could be arrested and tried, setting into motion the events that would culminate with the crucifixion of Jesus. (He rose again, though!)

The Bible doesn't give us much in the way of motive for his actions.
There are some who believe that Judas, by betraying Jesus, was following God's command. Someone had to have betrayed Jesus for the story to play out as it did, so Judas wasn't disobeying, but was fulfilling the plan. 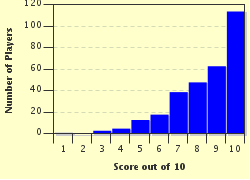 
Other Destinations
Explore Other Quizzes by arthurdent001