No Sympathy for the Devil Trivia Quiz

There is little sympathy for the devil in Christian theology. This quiz looks at how he is portrayed in the Old and New Testaments.

Quiz Answer Key and Fun Facts
1. The serpent that tempts Adam and Eve in the garden of Eden has traditionally been viewed as a personification of the devil. There is, however, only one book of the Bible that specifically portrays the devil as a serpent. Which book is this, that comes at the other end of the Bible?

"He seized the dragon, that ancient serpent, who is the devil, or Satan, and bound him for a thousand years." (Revelation 20 v. 2)

There are further references in Revelation 12.
2. The Hebrew word "Satan" refers more to a role than a name. Which of the following comes closest to its meaning?

The noun satan is derived from a related verb meaning to oppose or accuse. In the book of Job, the role of Satan (or, more correctly, THE satan) appears to be one of bringing accusations to God about people on Earth. This also occurs in the book of Revelation where John describes the downfall of Satan thus:
"For the accuser of our brothers, who accuses them before our God day and night, has been hurled down." (Revelation 12 v. 10).
3. In one of the Bible's earliest references to Satan, he is given permission by God to terrorise a righteous man. In which book of the Bible do we find this story?

"The Lord said to Satan, "Very well, then, he is in your hands; but you must spare his life." So Satan went out from the presence of the LORD and afflicted Job with painful sores from the soles of his feet to the top of his head." (Job 2 v. 6-7)

Many scholars consider the prologue to the book of Job to be one of the earliest portions of literature in the Bible. The premise of the book is that Satan challenges God that Job would be nowhere near as righteous if misfortune came his way. Satan is then given permission to spoil his life. From the earthly perspective, Job and his companions have no idea of this arrangement and have a theological discussion about the reasons for suffering.

The portrayal of Satan that we have here is interesting because he is shown in a neutral light - not one of the angels but not an outright enemy of God.
4. In another of Satan's rare Old Testament appearances, he entices a famous king to sin by taking a census of Israel. Which king was this?

"Satan rose up against Israel and incited David to take a census of Israel. So David said to Joab and the commanders of the troops, 'Go and count the Israelites from Beersheba to Dan. Then report back to me so that I may know how many there are.'" (1 Chronicles 21 v. 1-2)

What makes this even more interesting is reading the parallel account of the incident in 2 Samuel. This begins:
"Again the anger of the Lord burned against Israel, and he incited David against them, saying, 'Go and take a census of Israel and Judah.' So the king said to Joab and the army commanders with him, 'Go throughout the tribes of Israel from Dan to Beersheba and enroll the fighting men, so that I may know how many there are.'" (2 Samuel 24 v. 1-2)

Not only does this raise the knotty theological question of whether God could ever incite someone to sin (which David acknowledged it as being), but it also interchanges the names of God and Satan. This appears to show again that, at this stage of Israel's religious thinking, God and Satan were not seen as being as diametrically opposed as they would later become.
5. By the time of the New Testament, the Bible is unequivocal that the devil is the enemy of God's people. One tradition, which builds on the book of Revelation, seeks to explain the devil's origins. How does it do this?


Answer: It says that Satan is a fallen angel.

Michael refers to the archangel Michael, commander of the army of angels. In Revelation, this is portrayed as a future event but many people, including John Milton in "Paradise Lost", have seen it as an explanation of the devil's roots.
6. Early Christian circles came to associate the name of Lucifer with the devil on the basis of a verse from Isaiah. This speaks of the morning star being cast down from heaven to earth. To which planetary body is it referring?

"How you have fallen from heaven, O morning star, son of the dawn! You have been cast down to the earth, you who once laid low the nations!" (Isaiah 14 v. 12)

In its original historical context, this is a gibe against the king of Babylon and was probably not intended to describe the devil. The Greek name for the morning aspect of Venus is Phosphoros and Lucifer is the translation of this name into Latin.
7. The gospels record Jesus as struggling with the devil whilst praying and fasting in a desert place. Three times Jesus is tempted and each time he responds with which tactic?


Answer: He quotes from scripture.

Firstly the devil tempts Jesus to eat - to turn stones into bread - and Jesus responds:
"It is written: 'Man does not live on bread alone.'" (Deuteronomy 8 v. 3).

Secondly, the devil tempts Jesus with power, offering him total world dominion if he will bow down to Satan. Jesus responds:
"It is written: 'Worship the Lord your God and serve him only.'" (Deuteronomy 6 v. 13).

Finally, the devil tempts Jesus into the spectacular by throwing himself from the roof of the Temple and trusting the angels to save him. Jesus responds:
"It says: 'Do not put the Lord your God to the test.'" (Deuteronomy 6 v. 16)

For the full account see Luke 4 v. 1-13.
8. "All the people were astonished and said, 'Could this be the Son of David?' But when the Pharisees heard this, they said, 'It is only by Beelzebub, the prince of demons, that this fellow drives out demons.'" (Matthew 12 v. 23-24) Beelzebub is a further title given to the devil. Its literal translation is also the title of which twentieth century novel?


Answer: Lord of the Flies

The onomatopoeic name of Beelzebub derives from the name of an ancient Philistine deity, Baal-Zebub. There is a reference to this "god" in the book of 2 Kings. King Ahaziah seeks to consult it about an injury sustained in a fall. Elijah prophesies that Ahaziah will die because he has not consulted the God of Israel. Ahaziah dies (2 Kings 1).
9. "Your enemy the devil prowls around like a _________ looking for someone to devour." (1 Peter 5 v. 8) Peter likens the devil to which of these animals?

"Be self-controlled and alert. Your enemy the devil prowls around like a roaring lion looking for someone to devour. Resist him, standing firm in the faith, because you know that your brothers throughout the world are undergoing the same kind of sufferings." (1 Peter 5 v. 8-9)

It has been suggested that, far from communicating the ferocity of the devil, Peter is describing him as toothless in the wake of the resurrection of Jesus. This theory is based upon the fact that a lion stalking prey does not roar. It is either silently approaching or putting all its energies into the chase. A roaring lion, by contrast, may only be capable of invoking fear in its target. This is reinforced by Peter's language. He uses words such as "alert" and "resist" rather than "run" or "flee".
10. According to the Bible, what will be the ultimate fate of the devil?


Answer: He will be thrown into a lake of sulfur.

The prevailing view down through the centuries has always struck me as odd. This states that:
1. Jesus has victory over the devil.
2. The devil will torment, for eternity, those souls that don't make it into heaven.
3. The road to heaven is narrow and, therefore, there will be more people in hell than heaven.
Doesn't sound much of a defeat to me!

Thankfully, from the viewpoint of Christian theology, the Bible paints a different picture:
"And the devil, who deceived them, was thrown into the lake of burning sulfur, where the beast and the false prophet had been thrown. They will be tormented day and night for ever and ever." (Revelation 20 v. 10)
Source: Author glendathecat 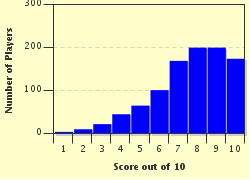