This quiz takes a look at a few more of the thousands of self-identified Christian groups currently worshipping in the United States.

Quiz Answer Key and Fun Facts
1. Which denomination was originally founded in 1933 as a radio ministry?

The church was originally founded by Herbert Armstrong as a radio ministry, and it came to be known as the Radio Church of God, later the World Wide Church of God (WCG). The WCG once had many controversial doctrines that departed from mainstream Christian doctrine, but many of these were revised by leadership upon the death of its founder.

The WCG is now a member of the National Association of Evangelicals and claims over 60,000 members.
2. Which denomination bears the official name of Unitas Fratrum?

The name means "Unity of the Brethren." The church is also sometimes called the Bohemian Brethren because its heritage began in 14th century Bohemia in what is today the Czech Republic. The church places a priority on both Christian unity and personal piety.
3. Which denomination was formed in 1957 by uniting the Congregational Christian Church and the Evangelical and Reformed Church?


Answer: The United Church of Christ

The United Church of Christ is not to be confused with the Churches of Christ, which is a loose affiliation of individual churches growing out of the 19th century Restoration movement.
4. Which denomination believes that Christ leads the church through revelation given to the President of the church, whom it considers to be a prophet?

Mormons teach that an apostasy occurred not long after Peter's death and that Christ restored the true church through the prophet Joseph Smith.
5. Which of the following is not considered a church in the "adventist" family?

Other less traditional groups also considered to have Adventist influences include the Christadelphians and Jehovah's Witnesses.
6. Which of the following is the largest denominational group in the U.S. by membership?

As of 2004, there were over 37,000 churches in the United States in the Southern Baptist Convention.
8. The Church of Jesus Christ of the Latter-day Saints is the largest denomination in which of the following states?

Popularly known as the Mormon church, the Church of Jesus Christ of the Latter-day Saints is the largest denomination in both Idaho and Utah.
9. According to the 2001 Barna Poll on U.S. Religious Beliefs, what percentage of American Catholics, Methodists, Lutherans, and Episcopalians agreed with the statement that "Christ was without sin"?

Of these groups, the American Catholics were most likely to agree with the statement "Christ was without sin," at 33% of respondents. Less than 23 percent of respondents in these denominational groups agreed that man does _not_ earn his way to heaven by good works. Barna's colleague, the Episcopalian Gerald McDermott, said the poll revealed an "epochal change in popular theology."
10. What is the second largest Christian communion in the world?

The Southern Baptist church is usually classified as "evangelical" rather than "mainline." Mainline churches tend to be ecumenical in outlook and moderate to liberal in theology, and they are sometimes called "mainstream." Other mainline churches include the American Baptist Churches, the United Church of Christ, and the Reformed Church in America, to name but a few.
12. Which of the following _is _ generally considered a "mainline" Protestant church?

These other three churches are generally considered too "conservative" to qualify as "mainline" churches. The PCA is a more conservative off shoot of the PCUSA. There is also an EPC (Evangelical Presbyterian Church), which takes up a middle ground between the PCUSA and the PCA.

From 1965 to 1990, mainline Protestant churches lost between one fifth to one third of their membership. Some attribute the decline to liberalized theology, others to simple demographics and birth rates. According to the Association of Religion Data Archives, as of 2000, evangelical Protestants had over 13 million more members than mainline Protestant churches.
14. Who sponsors the Convocation of Anglicans in North America (CANA)?


Answer: The Church of Nigeria

As of 2007, CANA had 37 churches in America.
15. What is the term used to refer to the communion of Eastern Christian churches that accept only the first four ecumenical councils?

In the United States, the Standing Conference of Oriental Orthodox Churches in America (SCOOCA) was established in 1973.
16. Which Christian communion uses The Book of Common Prayer?

First published in 1549, the Book of Common Prayer contains prayers, orders, and litanies used in liturgical worship. The Anglican church considers itself to be the "via media," or middle way between Roman Catholicism and Protestantism.
17. Which of the following denominations is _not_ an heir of the Anabaptist movement?

The Anabaptists were radical dissenters in 16th century Europe who believed that infant baptism was invalid because a child cannot choose religious faith.
18. Which of the following is _not_one of the "peace churches"?

The peace churches preach Christian pacifism and nonviolence. Most members of peace churches agree that Christians should not commit violence on behalf of government (i.e. war), and some members support nonresistance even in the case of self-defense.
19. The first Baptist church in America was established in what (future) state?

In 1639, Roger Williams established a Baptist church in Providence and Dr. John Clarke established one in Newport.
20. Which of the following denomination is _not_ a Pentecostal church?

Pentecostalism emphasizes a direct, personal experience of God through what is called the "baptism of the Holy Spirit," an experience usually accompanied by speaking in tongues.
21. Which of the following denominations maintains the traditional doctrine of the Trinity?

The Iglesia ni Cristo (INC) originated in the Philippines in 1914. The INC claims to restore the original church prior to the "apostasy" and teach neither Trinitarianism nor the divinity of Christ. The Church of Jesus Christ of Later-day Saints teaches that the Father and Son are two distinct beings with flesh and bone bodies while the Holy Ghost is a third distinct being with a spirit body. Christadelphians reject the doctrine of the Trinity as well as the doctrine of the pre-existence of Christ and the personhood of the Holy Spirit.
22. Which group of churches, connected with the teachings of Watchman Nee and Witness Lee, believe that all Christians in a particular city or town are part of the Body of Christ and that no church should take any name other than that of Jesus Christ?

The local churches believe they are restoring the lost truths and practices of the early church of the Bible. The movement began in China in 1920. Witness Lee moved to the U.S. in 1962 and began establishing local churches.
23. Which church is part of the Latter Day Saints movement and Restoration traditions?

Until 2001, the Community of Christ was known as the Reorganized Church of Jesus Christ of Latter Day Saints (RLDS). Its doctrines are generally considered to have more in common with mainstream Christianity than those of the LDS. In addition to the Bible, the Community of Christ recognizes the Book of Mormon and the Book of Doctrine and Covenants as foundational texts.
24. What group considers itself to be the original Buddhist branch of Christianity?


Answer: The Order of Nazorean Essenes

This group is not to be confused with the ancient Essene sect, which was a sect of Judaism in the 1st century BC through the 1st century AD.
25. In 2007, what was the largest non-denominational church in America, with tens of thousands of weekly worshippers who sought "your best life now"?

Lakewood Church meets in the former Compaq center in Houston, Texas and is led by the best-selling author Joel Osteen (whose books include "Your Best Life Now" and "Become a Better You").
Source: Author skylarb 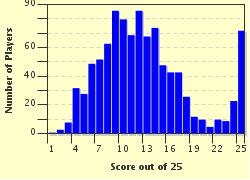