The process of translating the Bible into English has given rise to numerous "versions" and has sometimes inspired theological controversy. See how much you know about the history of English Bible translations.

Quiz Answer Key and Fun Facts
1. Who, with the help of his followers, made the first complete translation of the New Testament into English?

Although parts of the Bible had been translated earlier, the first complete English translation was made by John Wycliffe and his followers. Their work was based on the Latin Vulgate, which had been translated from the Septuagint, the Hebrew, and older Latin texts by St. Jerome. All of Wycliffe's works were condemned at the Council of Constance in 1415.
2. In 1536, this English Bible translator was put to death. His translation of the New Testament was based on Erasmus's Greek translation, with reference to the Vulgate.

Luther translated the Bible into German, not English. His translation was completed a little later than Tyndale's.
3. What English Bible translation, also known as "Cromwell's Bible," was the first English Bible authorized for public use in churches?

First translated in 1539, it was revised in 1561 and was then known as the Bishop's Bible.
4. Which Bible was the only English New Testament translation to be published during the reign of Mary Tudor, and also the first to be divided into verses?

This 1557 translation was the predominant family Bible use in England until the time of the Civil War. Shakespeare likely would have read this translation. Individual verse numbers were added to the English Bible for the first time by Robert Stephens, in 1551.
5. In general, committees are not known either for their efficiency or their artistry. But what Bible did a committee produce, which proved to be a major source of literary inspiration for centuries to come?

King James commissioned this "authorized" translation in 1611. At the time, it included the apocrypha as an index. Committees worked on other translations as well, but the King James is the only one generally agreed to be a literary masterpiece in and of itself.
6. What 20th century, Catholic Monsignor translated the Bible from the Latin Vulgate?

Monsignor Ronald Knox published his translation in 1945-1948. Knox was born an Anglican but converted to Catholicism at the age of 29. Prior to Knox's translation, the first Catholic English Bible translation was the Doway/Rheims version, published in 1609.
7. What Bible translation gave rise to controversy because of its insistence on gender neutral language and because of the theological implications of some of its word choices?

The New Revised Standard Version came out in 1988, and ignited controversy because of its insistence on gender neutral language, which some considered too political. The main source of controversy, however, was that in some instances the NRSV translation seemed to remove the Christian, messianic implications of Old Testament passages, as compared to earlier English translations.

For example, the explicit image of the crucifixion in Psalm 22:16--"they pierced my hands and feet" in the KJV--became "my hands and feet have shriveled" in the NRSV. Isaiah 7:14, taken by Christians to be a prophecy of Christ, read in the KJV: "Behold, a virgin shall conceive, and bear a son, and shall call his name Immanuel." In the NRSV, however, "virgin" became "young maid."
8. What was the first complete, English, Catholic Bible translation made from the original languages?

The completed NIV was published in 1978. The committee that produced it consisted of scholars from various countries, thus making it "international." A variety of denominations were also represented.
10. Which of the following is not really a Bible "translation," but rather a "paraphrase"?

All Bible translations are necessarily interpretive, since the meaning of some words is unclear in the original languages. But some Bible Versions aim not for generally accurate translation, but for a paraphrasing of the text, in an effort to provide interpretive meaning. The most popular of these paraphrases is the Living Bible, first published in 1971.
11. "Therefore the Lord himself shall give you a sign; Behold, a virgin shall conceive, and bear a son, and shall call his name Immanuel." From which translation does this quotation come?

The Shakespearian language -- with the "behold" and the "shall" should give this one away. Many people often forget that the KJV is a modern English translation.
12. "Therefore the Lord himself will give you a sign. Look, the young woman is with child and shall bear a son, and shall name him Immanuel." From which version does this quotation come?

The clue here is the choice of "young woman" rather than "virgin." Since Christians take this verse to be a prophecy of Christ, who was born of the Virgin Mary, this change has been very controversial, and has been seen by some to be a liberal theological statement.

The Hebrew word can actually mean either "virgin" or "young woman," though the Greek Septuagint chose the specific Greek word for "virgin" when translating the Hebrew Scriptures.
13. "And Jesus went out, and saw much people, and had ruth on them, for they were as sheep not having a shepherd." From which version does this quotation come?

The verse is Mark 6:34. The use of older language -- "ruth" rather than "mercy" or "compassion" -- should be the clue here. In the more modern KJV this verse reads, "And Jesus, when he came out, saw much people, and was moved with compassion toward them, because they were as sheep not having a shepherd: and he began to teach them many things.
14. Some versions attempt word for word translations, others strive to be more idiomatic and to translate thought for thought. Of the following, which is most nearly a word for word translation?

These others are more often described as "paraphrases" than as "translations." The NASB, however, is a formal translation that is generally more accessible than the King James and was published, in an updated version, in 1971.
15. According to Zondervan, of the following translations, which requires the lowest reading level to understand?

Zondervan rates the reading levels as follows: KJV (12), NASB (11), NKJ (9), and NIRV (2.9). The NIRV uses very simple words and is meant to be accessible to readers of many nations.
Source: Author skylarb 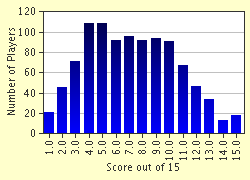