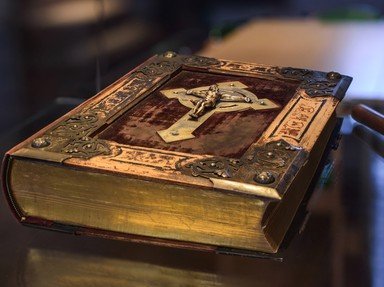 Formation of the Old Testaments Quiz

This quiz covers how and when the Hebrew canon and the Catholic, Protestant, and Ethiopian Old Testaments were formed.

Quiz Answer Key and Fun Facts
1. When do _liberal_ scholars believe that the Pentateuch (the first five books of the Bible) was edited into its final form?


Answer: During the Babylonian Exile

While conservative scholars believe the Pentateuch was written in the time of Moses with a few additions made after his death, liberal scholars believe it was a compilation of a variety of sources and that it did not take its final from until the Exile.
2. The Septuagint, or the Greek translation of the Hebrew Scriptures, was compiled beginning in the 3rd century BC. At first, it only contained the Pentateuch, but later came to include other books.

By 70 AD the Septuagint came to contain all of the books of the Hebrew Bible, as well as additional books written in Greek, which most Protestants term the "Apocrypha." The Old Testaments of the Catholic, Greek, Slavonic, Armenian, and Ethiopian traditions are based on the Septuagint.
3. These were in the Septuagint but are not included in the Old Testament of the Latin Vulgate Bible.

These books are included in an appendix, but not in the Old Testament proper.
4. In addition to the books found in the Septuagint, the Ethiopian Old Testament also includes what additional book(s)?

The Ethiopian Old Testament canon contains additional Pseudepigraphal books (books not in the Septuagint, and not in Jewish, Protestant, or Catholic canons). These include 1 Enoch and Jubilees. The Gospel of Thomas is a Gnostic Gospel and it is not part of the New Testament.
5. I and II Maccabees, which tell the story that forms the basis for the Hanukah holiday, is found in which scriptural canon(s)?


Answer: The Catholic Old Testament only

Both the Roman Catholic and the Eastern Orthodox churches accept these seven books as part of the Old Testament canon, and they often refer to them as "deuterocanonical."
7. The rabbis who met in Jamnia officially listed the books of the Hebrew Scriptural Canon. When did this happen?

This occurred in about 90 AD. No official Greek canon had been defined, although in practice the Greek-speaking Jews and the early Christians had already been using the books in the Septuagint. Some of these books were originally written in Greek, not Hebrew.

The Palestinian rabbis excluded all of the non-Hebrew books from the canon. The canon they selected consisted of 24 books, and it is the same canon Protestants use, though Protestants subdivide the books into 39.
8. Who coined the term Apocrypha to refer to the books that were included in the Septuagint but not in the Hebrew Scriptural canon?

Jerome coined this term, which means "hidden," when making his Latin translation of The Bible (The Vulgate). He had been using the Septuagint and the old Hebrew text. In doing so, he noticed that some of the books in the Septuagint were not in the Hebrew texts.
9. Which of the following books encountered the most opposition when the Hebrew scriptural canon was formed?

The reason was probably its sexual imagery and its lack of focus on God. Christians have tended to interpret the Song as being symbolic of Christ's love for His Church. The only other books meeting any real opposition were Esther and Ecclesiastes, but all were included.
10. The Dead Sea Scrolls, which were discovered in 1947, gave us the oldest surviving Old Testament manuscripts. From when do these scrolls date? 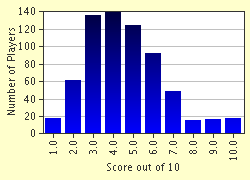