Do You Know Your Biblical ABCs? Quiz

Each of the following answers or a main word of the question will correspond to one of your ABCs. It will go in order so it'll be "a", than "b", etc. Understand? Good! All verses and info are from the NLT Life Application Study Bible.

Quiz Answer Key and Fun Facts
1. In Ephesians chapter six, what does Paul tell Christians they need to wear, as a whole?

"A final word: Be strong with the Lord's mighty power. Put on all of God's armor so that you will be able to stand firm against all strategies and tricks of the Devil." Eph. 6:10,11 The Armor of God includes the breast plate of righteousness, the helmet of salvation, the sword which is the Word of God, the belt of truth, shield of faith, and the shoes to spread the Good News.
2. In the beginning, was the separation between light and dark the first thing that God was said to have created?

"In the beginning God created the heavens and the earth." Genesis 1:1
3. He was one of the scouts sent by Moses to survey Canaan.

Caleb and Joshua, the other scout, were also the only two to escape Moses' curse against the rebellious Israelites and were allowed to enter the promised land.
4. Who was the only female judge named in the Old Testament?

Though Eli trained Samuel, who became the greatest judge of Israel, he had trouble disciplining his own sons. Eli's sons were priests but they had no respect for God or the people. Eli knew of their sins against God but did almost nothing about it, and because of this God ended Eli's family line in the priesthood. This story is found in 1 Samuel 2.
6. In 1 Corinthians 13:13 (NIV), Paul says that three things will endure: faith, hope, and love. Which does he say is the greatest of these?

"There are three things that will endure - faith, hope,and love - and the greatest of these is love." Some versions translate "love" as "charity".
7. Ruth is not listed in Jesus' genealogy.

Ruth married Boaz and was David's great-grandmother, thus she was indeed in Jesus' genealogy. Ruth's mention in the genealogy is found in Matthew 1:5.
8. Which of these women gave birth to Ishmael?

Hagar was the slave-wife of Abraham. Hannah was Samuel's mother. Herodias was the name of both mother and daughter who were behind the beheading of John the Baptist. The daughter was also known by the name of Salome. Though there is no definitive proof, some believe that Hatshepsut may have been the Egyptian princess who saved Moses.
9. God never refers to himself as "I AM".

"After David had finished talking with Saul, he met Jonathan, the king's son. There was an immediate bond of love between them, and they became the best of friends." 1 Samuel 18:1
11. With what did Judas betray Jesus?

"But even as he said this, a mob approached, led by Judas, one of his twelve disciples. Judas walked over to Jesus and greeted him with a kiss. But Jesus said, 'Judas, how can you betray me, the Son of Man, with a kiss?'" Luke 22:47-48
12. In the book of Revelation, Jesus is called both a lion and a lamb.

"Then I wept because no one could be found who was worthy to open the scroll and read it. But one of the twenty-four elders said to me, 'Stop weeping! Look, the Lion of the tribe of Judah, the heir to David's throne, has conquered. He is worthy to open the scroll and break its seven seals.' I looked and I saw a Lamb that had been killed but was now standing between the throne and the four living beings and among the twenty-four elders." Revelation 5:5-6
13. Which of these was the first to be martyred for the Christian faith?

"And as they stoned him, Stephen prayed, 'Lord Jesus, receive my spirit.' And he fell to his knees, shouting, 'Lord, don't charge them with this sin!' And with that he died." Acts 7:59-60
14. Jesus told of the rich, young ruler to his disciples that it was harder for a rich person to enter heaven than for a camel to go through what?


Answer: the eye of a needle

While Orpah returned home to her people after Naomi persuaded her, Ruth chose to go with her mother-in-law. "Don't ask me to leave you and turn back. I will go wherever you go and live wherever you live. Your people will be my people, and your God will be my God." Ruth 1:16
16. This person was swept away by the Spirit of the Lord after baptizing the Ethiopian eunuch.

"As they rode along, they came to some water, and the eunuch said, 'Look! There's some water! Why can't I be baptized?' He ordered the carriage to stop, and they went down into the water, and Philip baptized him. When they came up out of the water, the Spirit of the Lord caught Philip away. The eunuch never saw him again but went on his way rejoicing." Acts 8:36-39
17. The Queen of Sheba scoffed at God even after hearing the wisdom of Solomon.

These were just a few of her words after Solomon answered her many questions with wisdom: "The Lord your God is great indeed! He delights in you and has placed you on the throne of Israel. Because the Lord loves Israel with an eternal love, he has made you king so you can rule with justice and righteousness." 1 Kings 10:9
18. This woman is listed in Hebrews 11 for her faith.

"It was by faith that Rahab the prostitute did not die with all the others in her city who refused to obey God. For she had given a friendly welcome to the spies." Hebrews 11:31 When Joshua sent two spies into Jericho they came to Rahab's home, Rahab protected the spies from the men of the city and proclaimed, "For the Lord your God is the supreme God of the heavens above and the earth below." Joshua 2:11 ... Because of her faith, and her protection of the spies, those in her house were spared during the Israelite attack on the city.
19. The wise men followed this to find the young Jesus.

"Jesus was born in the town of Bethlehem in Judea, during the reign of King Herod. About that time some wise men from eastern lands arrived in Jerusalem, asking 'Where is the newborn king of the Jews? We have seen his star as it arose, and we have come to worship him.'" Matthew 2:1-2
20. Is the capitalized word in this quote correct? "I am the way, the TEACHER, and the life."

The verse is actually: "Jesus told him, 'I am the way, the truth, and the life. No one can come to the Father except through me.'" John 14:6 This was in response to a question from Thomas.
21. Because of his adultery with Bathsheba, David had her husband killed. What was the name of her husband?

Instead of going to the warfront with his men David stayed behind. Due to this he saw Bathsheba taking her bath on her balcony. He became enamored of her, and he slept with her. Shortly afterwards, she discovered she was pregnant. David tried to get her husband to come home and be with Bathsheba, but Uriah refused to have comforts while his men were in the battlefield.

As a last resort, and as the desire to cover his sin became stronger, David ordered that Uriah be put in a dangerous place on the battlefield so that he would be killed.

In response, the Lord sent the prophet, Nathan, to confront David. As a result of his sins, David and Bathsheba's child did not live. This story is found in 2 Samuel 11 and 12.
22. In the parable of the vine and the branches, who is the gardener?

"I am the vine, and my Father is the gardener. He cuts off every branch that doesn't produce fruit, and he prunes the branches that do bear fruit so they will produce even more." John 15:1-2
23. In Revelation 14:10, what was used to symbolize God's wrath and judgement?

"Then a third angel followed shouting, 'Anyone who worships the beast and his statue or who accepts the mark on the forehead or the hand must drink the wine of God's wrath. It is poured out undiluted into God's cup of wrath.'" Rev. 14:9-10
24. Did Esther become the wife of King Xerxes, who was also called Ahaseurus?

"When Esther was taken to King Xerxes at the royal palace in early winter of the seventh year of his reign, the king loved her more than any of the other young women. He was so delighted with her that he set the royal crown on her head and declared her queen instead of Vashti." Esther 2:16-17 According to other translations, Xerxes is called Ahaseurus.

It wasn't uncommon for rulers of that time to be known by other names. Thanks to the player who sent me this one.
25. Who was the father of John the Baptist?

Unfortunately, Zechariah doubted how he would have a son because of the age of his wife and himself. Because of that, he was mute until the naming ceremony of his son, John. This can be found in Luke 1.
Source: Author laughinggirl 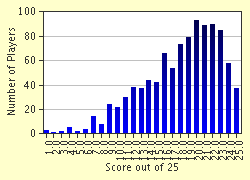