'I am Not Who You Think I am' Trivia Quiz

This quiz takes a look at impersonators in the Old and New Testaments. (Inspiration for this quiz came after reading 'The Complete Book of Bible Trivia' by J. Stephen Lang.)

Quiz Answer Key and Fun Facts
1. According to Genesis 29:21-25, who successfully posed as her younger sister on Jacob's wedding night?

It's mindboggling, but Jacob thought he had married Rachel and spent his wedding night with her, but to his amazement in the morning he found out he had actually spent the night with Rachel's older sister Leah. Details of the extraordinary situation can be found in Genesis 29:21-25.

In a nutshell, Jacob agreed to work for Laban, the father of Leah and Rachel, for seven years. In return, Jacob was to win the hand of Rachel. Verse 22 states Laban gathering together "all the men of the place and made a feast" and later in the evening he took Leah to Jacob, who had sexual relations with her, thinking it was Rachel. (It must've been extremely dark and/or Leah was excellent at impersonating Rachel.)

Verse 25 tells of Jacob discovering to his amazement in the morning he had spent the evening with Leah. Scripture goes on tell of Jacob pointing out the deception to Laban with Laban simply replying it was not the custom to "give the younger before the firstborn". As a result, Jacob worked seven additional years to win the hand of Rachel.

According to Scripture, Leah ended up in a loveless marriage and Rachel was always the highly favored one in Jacob's eyes.
2. What woman pretended to be her husband's sister on two different occasions -- once in Egypt and another time in Gerar? (Genesis 12:10-20 and Genesis 20:1-17)

On two different occasions, Sarah pretended to be Abraham's sister rather than his wife. The deception took place in Egypt and in Gerar, a Philistine district in what is today south central Israel.

Genesis 12:11-20 tells of Abraham and Sarah (who were known as Abram and Sarai at the time) moving to Egypt during a famine and pretending to be brother and sister. Scripture states they took such action to prevent Abraham from being killed.

According to Genesis 12:11, Sarah was extremely beautiful and as per the custom of the day, the Pharaoh would want to add her to his harem. Notes in the NIV Study Bible state "if Pharaoh were to add Sarai to his harem while knowing she was Abram's wife, he would have to kill Abram first."

According to Scripture, reports of Sarah's beauty reached the Pharaoh and he added her to his harem. However, Scripture states "the LORD plagued Pharaoh and his house with great plagues because of Sarai, Abram's wife." When the Pharaoh found out Abram and Sarai were husband and wife, he re-united the couple.

Abraham and Sarah would pull off the same ruse in Genesis 20 to deceive Abimelech, king of Gerar, into thinking they were brother and sister. And once again, the deception was designed to save Abraham's life.

To stave off an endless series of correction notices, it must be pointed out Isaac and Rebekah pulled off the same deception, pretending to be brothers and sisters, in Genesis 26:7. Again, such action was taken to prevent Isaac from being killed. However, the deception of Isaac and Rebekah took place in Gerar. The question is based on such a deception taking place in TWO different locations -- Egypt and Gerar.
3. According to 1 Samuel 21:11 - 22:1, who pretended to be a madman to escape from King Achish of Gath?

With Saul attempting to kill him, Scripture tells of David fleeing to Gath, a Philistine city ruled by Achish. However, with the Philistines being very much aware of his reputation (see 1 Samuel 21:11), David became fearful Achish would want to kill him.

In other words, he had left Israel because his life was threatened and now his life was being threatened in Gath. As a result, David "changed his behavior before them, pretended madness in their hands, scratched on the doors of the gate, and let his saliva fall down on his beard." With David successfully pretending he was a madman, Achish saw no need to kill him. Scripture goes on to tell of David departing from Gath and escaping to the cave of Adullam.
4. Who deceived his father into believing he was his slightly older twin brother?

Jacob tricked his father Isaac into blessing him over Esau, his slightly older twin brother. It's a bit of a long story, but Jacob disguised himself as Esau with the help of Rebekah to pull off the ruse on Isaac who was elderly and frail, and whose eyes "were so dim that he could not see." The ruse is recounted in Genesis 27:1-40.

According to Scripture, Rebekah favored Isaac while Jacob favored Esau, and this is where things started to fall apart. With Isaac basically being on his deathbed, Rebekah convinced Jacob to disguise himself as Esau to obtain his blessing. Scripture reports Isaac asked Esau to hunt game for him and make some "savory food", saying that when he returned he would bless his son. Rebekkah overheard the conversation and swung into action.

Genesis 27:15-17, in the NKJV, states: "Then Rebekah took the choice clothes of her elder son Esau, which were with her in the house, and put them on Jacob her younger son. And she put the skins of the kids of the goats on his hands and on the smooth part of his neck. Then she gave the savory food and the bread, which she had prepared, into the hand of her son Jacob."

Jacob in turn went to his father and impersonated Esau. He was so effective at his impersonation he was able to deceive Isaac and receive Esau's blessing. (The goat skins also created the impression he was a hairy man like his brother Esau.)

Later, Jacob would flee for his life as Esau was going to kill him, as per Genesis 27:41-46.
5. According to 1 Kings 22:30-40, what evil king of Israel disguised himself while going into battle against the Syrian army?

Ahab is the correct answer. 1 Kings 22:30-40 states Ahab, king of Israel and the husband of Jezebel, disguised himself and went into battle against the Syrian army. Joining the Isrealites were the soldiers of Judah, led by Jehoshaphat, king of Judah.

According to Verse 31, the king of Syria gave express orders to the thirty-two captains of his chariots to "fight with no one small or great, but only with the king of Israel." However, the Syrians were perplexed when they couldn't spot Ahab.

Nevertheless, Ahab would meet his end. Verse 34 tells of an unnamed Syrian drawing a bow at random and striking Ahab between the joints of his armor. Later that evening he died as a result of his wound, just as had been predicted by Micaiah, a prophet of God, as per 1 Kings 22:1-29.
6. According to 1 Kings 14:1-6, what king's wife disguised herself when she went to consult with Ahijah, a prophet of God?

Jeroboam's unnamed wife disguised herself before meeting with Ahijah, a prophet of God, but the disguise did not work. According to 1 Kings 14:1-6, Jereoboam's son (who was called Abijah) became sick, and Jeroboam requested his wife to visit Ahijah the prophet to find out what the future held for his son. As part of his instructions, he told his wife to disguise herself and take ten loaves, some cakes and a jar of honey to Ahijah.

Making the woman's assignment relatively easy was the fact Ahijah was elderly and his eyes "were glazed by reason of his age", as per Verse 4. However, Scripture tells of God informing Ahijah about the woman's deception and when "she came through the door, he said, "Come in wife of Jeroboam'."

Scripture goes on to tell of Ahijah accurately predicting disaster would fall on Jeroboam's household because he had done evil in the eyes of the LORD. By the time Jeroboam's wife returned, the child Abijah was dead. Shortly after this, Jeroboam would be dead as well.
7. According to 2 Samuel 14:1-24, who convinced an unnamed wise woman of Tekoa to pose as a widow when she met with David?

Joab is the correct answer, with the unnamed woman's story told in 2 Samuel 14. According to Scripture, she was approached by Joab, who told her to pretend to be a widow to reconcile David with his son Absalom after the murder of Amnon.

Joab's plan would succeed, as David agreed to forgive Absalom for the murder of his half-brother Amnon. However, a few years later, Absalom would stage a rebellion against his father which would plunge Israel into a bloody civil war.

According to the website Jewish Women's Archive, Tekoa was a village in the Judean hill country, about ten miles south of Jerusalem.
8. According to 1 Kings 20:35-43, what king was confronted by a son of a prophet of God pretending to be a wounded soldier?

1 Kings 20:35-43 provides an account of an unnamed son of the prophet pretending to be a wounded soldier and confronting Ahab. The son of the prophet was extremely serious when it came to disguising himself. According to Verse 35, he asked his neighbor to strike him. When the neighbor refused to strike him, Scripture states a lion found the man and killed him because of he had refused to obey the voice of the LORD. Verse 37 states the prophet found another man who struck him, inflicting a wound.

Scripture goes on to state the prophet departed and waited for King Ahab by the road, and disguised himself with a bandage over his eyes. When the king passed by, he cried out to the king, giving him a fairly lengthy account.

The account ended with the prophet's declaration Ahab would be facing judgment. Shortly afterwards, Scripture tells of Ahab dying in battle.
9. Who sent spies to act as followers of Jesus in an attempt to trap Him? (Luke 20:19-20)


Answer: Chief priests and the scribes

According to Luke 20:19-20, the chief priests and the scribes sent spies to act as followers of Jesus in an attempt to trap Him. Verse 19 states they wanted to lay their hands on Jesus, but were afraid of the people, as many of them were showing support for Him. Verse 20 goes on to state the chief priests and the scribes agreed to send spies "who pretended to be righteous" so they could "seize on His words" to have Him arrested.

Shortly afterwards, Jesus would be arrested, humiliated, tortured and crucified only to rise from the dead three days later, according to accounts in the Gospels of Matthew, Mark, Luke and John.
10. According to the apostle Paul, who masquerades as an angel of the light, as per 2 Corinthians 11:14?

In 2 Corinthians 11:14, Paul, the apostle to the Gentiles, warns readers about false apostles, "for Satan himself transforms himself into an angel of light." 2 Corinthians was addressed to members of the early church who lived in Corinth, a city in Greece. The book follows 1 Corinthians, another New Testament book written by Paul.

According to Christiananswers.net, Corinth was known for its wealth and for the "immoral and vicious habits of the people."
Source: Author Cowrofl 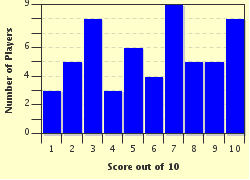