The Christian and Muslim views of Jesus have much in common despite some major differences. This quiz takes a look at how Jesus is presented in the Qur'an and Muslim tradition as compared to the Gospels and Christian tradition.

Quiz Answer Key and Fun Facts
1. What is the name given to Jesus in the Qur'an?

Isa al-Maseeh, or Jesus the Messiah, is considered by Muslims to have been a Muslim prophet who, like all Muslim prophets, preached submission to God. He received as a revelation from God the Injil, or Gospel, but Muslims believe the Gospel was distorted.
2. Which of the following is not used to refer to Jesus in Islamic tradition?

In the Gospels, Christ is referred to as the Son of God, the Son of Man, the Word, and the Messiah, among other things. The Qur'an also calls Jesus kalimatullah, or the "word of God," and gives him the title of "Messiah." However, in Islamic tradition the term Messiah contains no suggestion of divinity or atoning sacrifice, and Jesus is most often referred to as Ibn Maryam, or son of Mary.
3. Which of the following is Jesus said to have done in the Qur'an?

In the Gospels, Jesus is also said to have performed miracles including curing the blind and lepers and raising the dead from life. The Qur'an adds that, strengthened with the Holy Spirit, Jesus preached to men even in his cradle.
4. In the Qur'an, Jesus is said to have breathed life into clay birds. Where is this tradition found in Christian literature?

The Infancy Gospel of Thomas is a non-canonical Christian work that was popular among early Christians. It contains legends of the childhood of Jesus. In it, Jesus molds birds from clay and then brings them to life. Qur'an 5:110 also tells of Jesus breathing life into clay birds.
5. In the Qur'an, Jesus says that God should severely punish his disciples for perverting his message and saying that he taught that he was divine.

Muslims do not believe that Christ taught that he was divine, and Christ in fact denies this charge before Allah in the Qur'an. The Qur'an also says, "No mortal whom God has given the Scriptures and whom He has endowed with judgment and prophethood would say to men: 'Worship me instead of God'" (3:79).

However, that said, Jesus himself does not ask Allah to punish his followers. He says, instead, "If you punish them, they surely are your servants; and if you forgive them, surely you are mighty and wise" (Qur'an 5:117, trans. N.J. Dawood).
6. In Muslim eschatology, which role will Jesus not play in the end times?


Answer: He will judge all men

Most, but not all, Muslims see the Hadith as offering evidence of the second coming of Jesus. In his second coming, it is believed he will reveal that Islam is the true religion, marry, and die. At this time, most Muslims believe that Jesus will slay the al-Masîh al-Dajjâl, which literally translated is "the Deceiving Messiah" and loosely translated is the anti-Christ.
7. In al-Zuhd, Jesus says, "O Disciples, which of you can build a house on the waves of the sea?" What metaphor similar to "waves of the sea" does Jesus use in the Gospel of Matthew?

This saying of Jesus is found in Ahmad ibn Hanbal's al-Zuhd. The translation for this quote comes from Jarif Khalidi's "The Muslim Jesus." This saying contains a hint of Matthew 7:24-27, but there Christ says that everyone who fails to hear his word and put it into practice is like the foolish man who built his house upon the sand. Al Zuhd contains other sayings of Jesus resembling those found in the Gospels, including, "Do not cast pearls before swine" and "it is easier for a camel to pass through the eye of a needle than for a rich man to enter paradise."
8. In the Hadith, Muhammad sees Jesus in a dream. How does Muhammad describe Jesus?

He is also said to be of medium height and to have a red complexion. The New Testament nowhere describes the physical appearance of Jesus, although in Western Christian art he is traditionally depicted with long brown hair. This Christian depiction of Jesus probably arose because of a confusion of the terms Nazarene and Nazarite.

As part of their vows, Nazarites did not cut their hair, but Christ was not a Nazarite, he was a Nazarene (an inhabitant of the town of Nazareth). It is more likely that the historical Christ had short hair.
9. What did Jesus come to do, according to the Qur'an?

In the Qur'an, Jesus is said to have said to the Israelites, "I am sent forth to you from God to confirm the Torah already revealed, and to give news of an apostle that will come after me whose name is Ahmad." Ahmad is an alternate name for Muhammad, which means "The Praised One." Many Muslims also interpret John 14:16 to prophesy the coming of the prophet Muhammad, whereas Christians interpret it to refer to the coming of the Holy Spirit (regarded as the third person of the Trinity) on the day of Pentecost.
10. In Islamic tradition, how many prophets were there between Jesus and Muhammad?

In Islamic belief, the first prophet was Adam, the second to last was Jesus, and the last was Muhammad. Jesus (called Isa) is one of the Ulul Azmi, or the most revered, prophets, which also include Noah, Abraham, Moses, and Muhammad.
11. In the Gospel of John, Jesus prevents people from stoning a woman taken in adultery. A version of this story appears in al-Zuhd. How does it differ?


Answer: A man, not a woman, is the one taken in adultery

This story is found in John chapter 8. Al-Zuhd contains a different version of the story. It is a man, and not a woman, who is taken in adultery. Jesus says, "But no one should stone him who has committed what he has committed." Then everyone lets the stones fall from their hands except for Christ's disciple John, the son of Zachariah. This likely emphasizes the sinlessness of John.
12. According to the Qur'an, where did Mary give birth to Jesus?


Answer: Under a palm tree

In the Qur'an, Mary (Marayam) was traveling to a far off place when she went into labor and lay down at the foot of a palm tree (19:22). It had dates to feed her and a brook ran by her feet to satisfy her thirst. In the Christian Gospels, Jesus is born in a stable and laid in a manger (Luke 2:16). Other ancient, non-biblical Christian traditions have Jesus born in a cave.
13. Which of the following is not a generally accepted Muslim view of Jesus?


Answer: He was crucified

Like Christians, Muslims believe that Jesus was born of a virgin and that he lived a sinless life. While some Muslims do not believe that Jesus ascended alive to heaven, the majority do, and they base this belief on 3:55 and 4:158 in the Qur'an as well as Muslim tradition.

However, the core of Christian teaching centers on the crucifixion and resurrection of Jesus, whereas the Qur'an rejects the idea that Jesus was crucified: "They did not kill him, nor did they crucify him, but they thought they did" (4:157).
14. In Hannad ibn al-Sariyy's Kitab al-Zuhd, when Jesus is raised to heaven, what's one of the things he leaves behind?

He is said to have left nothing at all behind but a woolen garment, a slingshot, and two sandals. This echoes the asceticism he demanded of his apostles in Mark 6:7-9, whom he told to take for their journey nothing except a staff and sandals.
15. The Qur'an teaches that Mary was a virgin and therefore Jesus was begotten of or sired by God.

The Qur'an, although it does insist that Mary was a virgin, vehemently denies that Jesus was "begotten" of God: "God forbid that He Himself should beget a son! When He decrees a thing He need only say: 'Be,' and it is" (19:35, Trans. N.J. Dawood). In the Qur'an, Mary is called the "sister of Aaron" (19:28). Some have argued that this is due to a confusion between Miriam, the sister of Moses and Aaron, and Maryam (Mary), but Muslim commentators counter that "sister of Aaron" is merely equivalent to saying "a virtuous woman."
Source: Author skylarb 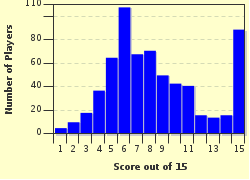 Related Quizzes
This quiz is part of series Comparative Religion:

Quizzes that look at and/or compare multiple world religions.