That's Not in the Bible! Trivia Quiz

The Bible is full of stuff, but some stuff just isn't in there. These questions are based on the Good News translation.

Quiz Answer Key and Fun Facts
1. Some people in the Bible definitely got around a bit. Which of these is NOT a method of travel found in the Bible?


Answer: On a gondola

Despite what many school nativity plays portray, the Bible does not say whether Mary went to Bethlehem on a donkey or not. Jesus, however, did travel into Jerusalem on a donkey (John 12:14). Riding on the clouds can be found in Psalm 104:3, and Jonah traveled by fish when he was swallowed by one in Jonah 1:17 and Jonah 2:10.
2. Jesus has lots of different names in the Bible. Which of these is NOT in the Good News Translation?

'Prince of Peace' can be found in Isaiah's prophecy about the birth of Jesus (9:6). John the Baptist calls Jesus 'the Lamb of God' in John 1:29, and Jesus calls himself the 'Bread of Life' in John 6:35. The song claims 'our God is a great big God' but it's not a phrase found in the GNT.
3. There are lots of reasons to celebrate and some of them are even in the Bible. But which of these do Jews and/or Christians NOT actually celebrate in the big book?

Nowhere in the Bible does it say that Christians should celebrate the birth of Jesus. In fact, it wasn't actually part of the Early Church: the first recorded Christmas celebration is about 300 years after Jesus' death. Despite this, some Christians like to remember this significant event, so Christmas is celebrated in some churches.

Marriages were celebrated in the Bible. One of the most famous weddings is the wedding at Cana where Jesus performed his first miracle (John 2). Exodus 12 commanded the Israelites to celebrate Passover to remember God saving them from death. There are also a few funerals in the Bible. In Genesis 50:14, Joseph returned from his father's funeral, and David attended a funeral in 2 Samuel 3:31.
4. The Bible is full of royalty, but which of these men was NOT a king?

Josiah was crowned king of Judah when he was just 8 years old. There were a couple of Herods in the Bible. One of them was the king who felt threatened by the prophecies of Jesus and commanded that all babies be killed so that no one could take his place as king (Matthew 2:16).

Another Herod had John the Baptist beheaded in Matthew 14:10. David was anointed king of Israel in 1 Samuel 16:13. Although Paul was a dominant figure in the New Testament, he wasn't actually a king.
5. There weren't quite as many queens named in the Bible, but fortunately there were enough to create a question on them! Which of these women was NOT a biblical royal?

Jezebel was queen to King Ahab, mentioned frequently throughout 1 Kings. Esther has a whole book named after her, telling the story of how she saved the Jews through her role as queen of Persia. The queen of Sheba visited Solomon in 1 Kings 10 to test him on his renowned wisdom by asking 'difficult questions'. 3576 x 9201 perhaps?
6. The Bible is littered with Biblical prophets, but which of these names is NOT one of them?

Deborah is a prophet and Israelite judge mentioned in Judges 4:4. Obadiah has a whole book (called - unsurprisingly - Obadiah) and his prophecy about the nation of Edom. Anna was a New Testament prophet who gave thanks for the birth of Jesus in Luke 2:36.

There are six or seven Marys in the Bible, and some of them had pretty important roles. Unfortunately, none of them are referred to as prophets.
7. Quite a few Biblical characters had their names changed. Which of these pairs is INCORRECT?

In Genesis 17:15 Abram/Abraham's wife Sarai is renamed 'Sarah', which means 'princess' in Hebrew. As names go, it's not a bad one! Jesus renames Simon in John 1:42, calling him 'Peter', which means 'the rock'. Later in the New Testament, a Levite called Joseph is called 'Barnabas' by the apostles, which means 'one who encourages' (Acts 4:36).

God tells Jacob his new name is 'Israel', not 'Judah' (Genesis 32:28). 'Israel' sounds like 'he struggles with God' in Hebrew. Why is he renamed this? I hear you ask. Well, in Genesis 32 Jacob wrestles with God and appears to be winning, until the man dislocates his (Jacob's) hip. At the end, Jacob says he has 'seen God face-to-face'.
8. It's not news that people need to eat, but which of these scrumptious delicacies would you NOT find in the Bible?

Matthew 3:4 tells us that John the Baptist ate locusts and honey... delicious! In 1 Samuel 25:18, Abigail loaded raisins, along with other delights, onto a donkey. Potatoes are of South American origin, so I doubt anyone mentioned in the Bible ever got to try one.
9. Jacob had many children - at least 13 in fact! But which of these is NOT one of those named in the Bible?

Dinah is the only daughter of Jacob (the only one mentioned in the Bible, anyway). She was born to his wife, Leah, in Genesis 30:21. Rachel died giving birth to Benjamin in Genesis 35:18. Zilpah, Leah's slave, gave birth to Jacob's son, Asher, in Genesis 30:12. Jonathan is not a son of Jacob. He is famous for being King Saul's son and David's friend, first mentioned in 1 Samuel 13:2.
10. The Bible is full of words. Over 700,000 of them in fact (thanks to Funtrivia's Q&A section). But not every word is in there. Which of these four did the writers neglect to include in the Good News Translation - or any other translation in fact?

On of the first sentences in the Bible contains the phrase 'let there be light', and 'light' crops up numerous times throughout the rest of the book. One of the most famous 'love' quotes in there is 1 Corinthians 13: 'Love is patient and kind...'. There are also lots of laughers in the Bible. Abraham and Sarah had a giggle in Genesis 17-18 when they were told they'd have a child in their old age. Hannah laughs in 1 Samuel 2:1, and the whole of Jerusalem laughs in 2 Kings 19:21. A lot of laughing goes on in Job as well, mostly at Job's expense. Luke 6:21 says 'Happy are you who weep now; you will laugh', so that's something to look forward to.

Pretty much all of the events in the Bible take place in the Middle east, so it's not surprising that llamas, animals of South American origin, don't make it in there.
Source: Author AcrylicInk 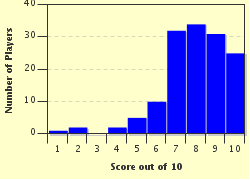 Related Quizzes
This quiz is part of series Religion Quizzes:

I've written a few religion quizzes and here they are!


1. If Jesus is the Answer, What is the Question? Very Easy
2. The Bible or the Quran Easier
3. Out of Context Easier
4. That's Not in the Bible! Average
5. Sweetest Devotion Average