This quiz will deal with the usually normal subject of weather. But weather can take on miraculous traits when dealing with God and the Bible. Here are ten events listed in the Bible that involve weather. (King James Version used)

Quiz Answer Key and Fun Facts
1. According to the Gospel of Matthew, Jesus Christ was involved in some weather a few times in his lifetime. One occurred when he was approaching the disciples. The disciples were attempting to take a boat to the other side of a body of water when they saw Jesus walking on the water toward them. When he reached and boarded the boat, the storm subsided. What body of water did this miracle occur on?

The disciples did most of their fishing along the Sea of Galilee. This was a fairly long distance from Jerusalem and Bethlehem, about 90 miles north of the area.

This story also includes the telling of Peter attempting to walk on water to greet Jesus, but he had difficulties when the storm started to increase in power (Matthew 14:24-33).
2. Probably the best known event involving weather in the Bible is the Great Flood. Through studying the Bible, theologians have determined the length of time that Noah, his family, and the animals were on the ark. What is the time frame in days that scholars tend to agree on as the length of Noah's captivity on the ark?

Scholars figure that the Hebrew month lasted thirty days. Noah was commanded by God to enter the ark, and in seven days the rain would begin (Genesis 7:4). Noah saw the rain begin the 17th day of the second month (Genesis 7:11). And Noah exited the ark on the 27th day of the second month the following year (Genesis 8:14). So twelve months multiplied by thirty makes 360. Add ten days for the difference in date between the two "second months", and you have 370. Now add the seven days before it rained, and that is 377.

If you put 40 days, that is the amount of time it rained. They sat in the ark much longer once it stopped raining.
3. Weather happenings were prevalent during the ten plagues of Egypt. One of the plagues featured a horrendous hailstorm, accompanied by fire. Of the ten plagues, which number plague was this?

"And Moses stretched forth his rod toward heaven: and the LORD sent thunder and hail, and the fire ran along upon the ground; and the LORD rained hail upon the land of Egypt. So there was hail, and fire mingled with the hail, very grievous, such as there was none like it in all the land of Egypt since it became a nation" (Exodus 9:23-24). Fire and ice. Not a pleasant combination.
4. God and Moses also used the weather to actually END one of the plagues, as it is stated they used a "mighty wind" to drive out this particular plague's results. What was it that the mighty wind was getting rid of?

"And the LORD turned a mighty strong west wind, which took away the locusts, and cast them into the Red sea; there remained not one locust in all the coasts of Egypt" (Exodus 10:19). This was plague number eight, and Pharaoh was still not finished being stubborn.
5. In Exodus 19, Moses had another occurrence with Biblical weather when he went up the mountain to receive God's Ten Commandments. What mountain was surrounded by "thunder and lightning" and a "veil of clouds" during Moses' climb upward?

"...there were thunders and lightnings, and a thick cloud upon the mount, and the voice of the trumpet exceeding loud; so that all the people that was in the camp trembled" (Exodus 19:16). The time that Moses was up on the mountain apparently was too long, as the people decided to form their own god. This didn't sit well with God or Moses.
6. This person experienced some dangerous sea storms upon his attempted fleeing from God's request to go to Nineveh and try and convert the people there. Who was this reluctant evangelist who had a whale of a time surviving the sea storm?

Once the other boatmen found out it was Jonah that God had wrath upon, causing the sea to roll, they threw him overboard, and immediately the storm ceased (Jonah 1:15). That was where Jonah's adventure ended as well-oh wait, there may have been one more thing...
7. Two people are documented in the Bible as never dying. One was Enoch, who was taken up to Heaven in Genesis 5. The other was this prophet, who according to II Kings 2, "went up by a whirlwind into Heaven". Who was this servant of God who was whisked to Heaven by way of a whirlwind?

Elijah asked of Elisha what he could do before leaving, and Elisha asked for double the spirit upon him as he continues God's work. When Elisha returned to his home, the residents there knew something was different, and they stated that "the spirit of Elijah was with him now" (II Kings 2:15).
8. According to Joshua 10, while Joshua was holding camp in the large city of Gibeon, five kings of surrounding areas banded together to wage war upon Joshua's people. This would prove disheartening to them, as God was with Joshua's men and they were forced to flee after losing the battle. But the weather played a part afterwards. Before they had made the complete retreat back home, the armies were nearly wiped out by what weather phenomenon brought on by God?

Joshua 10:11 states, "as they fled from before Israel, and were in the going down to Bethhoron, that the LORD cast down great stones from heaven upon them unto Azekah, and they died: they were more which died with hailstones than they whom the children of Israel slew with the sword." I'm not sure of the diameter description for this storm, but would guess golf-ball-size hail is nothing compared to this wrath-of-God-type hailstorm.
9. According to the book of the same name, this man of God had a vision that featured some unique weather. From the opening verses of the first chapter: "And I looked, and, behold, a whirlwind came out of the north, a great cloud, and a fire infolding itself, and a brightness was about it, and out of the midst thereof as the colour of amber, out of the midst of the fire." The vision gets even more intense after that. Who was this godly man?

His visions described in the Book of Ezekiel would go on to include four-faced men, a wheel to go where they went, dancing dry bones, and other rather unique objects to dream about. Ezekiel's name is defined as "God will strengthen".
10. In the King James Version, along with several other translations, "Peace, be still" are famous words used to stop a storm while riding on a boat. What transpired previous to those words frightened all the passengers on the boat, as the strong wind was threatening to capsize the boat. Who was it that ended this weather malady with three simple words?

Taken from Mark 4:37-41, Jesus was actually asleep in the lower portion of the boat when this storm came up, and the disciples went down to warn him by saying, "Don't you care if we all die?" Jesus calmly went to the main deck and spoke these prophetic words, and the storm ceased. Jesus promptly asked them if they had any faith at all in Him, to which they were pretty speechless.
Source: Author Spaudrey 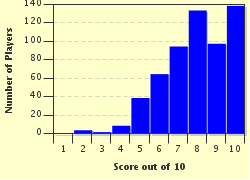