The Answer is Blowing in the Wind -- #2 Quiz

I was blown away by the number of references about wind in the Old Testament and the New Testament so a while back I compiled a quiz on the subject. The quiz generated favorable response, so I thought I would compile Part 2.

Quiz Answer Key and Fun Facts
1. John 3:8 in the NKJV contains this quote from Jesus: "The wind blows where it wishes, and you hear the sound of it, but cannot tell where it comes from and where it goes. So is everyone who is born of the Spirit." Who did Jesus make the statement to?

Jesus made the statement to Nicodemus after he talked with him at night, as per the third chapter of John. In John 3:3, Jesus tells Nicodemus he must be born again and Nicodemus responds in verse 4, "how can a man be born when he is old?" and "how can he enter a second time into his mother's womb?"

Jesus goes onto make the famous declaration in John 3:16: "For God so loved the world that He gave His only begotten Son, that whoever believes in Him should not perish but have everlasting life." It's that declaration that has become a pillar of the evangelical Christian movement.
2. According to Scripture, a leader had a dream of seven healthy heads of grain. Then seven thin heads, blighted by the east wind, sprang up after them. Who was the dreamer?

The correct answer is the Pharaoh. Details about his dream are told in the forty-first chapter of Genesis.

Genesis 41:5-7 in the NKJV states, "He slept and dreamed a second time; and suddenly seven heads of grain came up on one stalk, plump and good. Then behold, seven thin heads, blighted by the east wind, sprang up after them. And the seven thin heads devoured the seven plump and full heads. So Pharaoh awoke, and indeed, it was a dream."

Later his dream would be successfully interpreted by Joseph. He would tell the Pharaoh Egypt would enjoy seven years of bountiful harvests followed by seven years of famine.

Genesis 41:40 tells of the Pharaoh being so pleased with Joseph that he made him the second most powerful man in Egypt.
3. According to the tenth chapter of Exodus, the eighth plague the LORD unleashed on Egypt was the plague of locusts. From what direction did the wind come that drove the locusts into Egypt? (Exodus 10:13)

The correct answer is ten. According to Job 1:2, he was the father of seven sons and three daughters. No names are given, however.

According to verses 18-19, his children were eating and drinking at their oldest brother's house when "suddenly a great wind came from across the wilderness and struck the four corners of the house, and it fell on the young people," killing all of them.

In addition to losing his children and a number of servants, Scripture states Job lost his immense wealth which was the result of ownership in large herds of livestock.

The book ends with Job's fortunes changing dramatically for the better. Job 42:12-13, in the NKJV, states: "Now the Lord blessed the latter days of Job more than his beginning; for he had fourteen thousand sheep, six thousand camels, one thousand yoke of oxen, and one thousand female donkeys. He also had seven sons and three daughters."
5. According to Proverbs 27:15-16, what is as difficult to restrain as the wind?

According to Proverbs in the NKJV, a contentious wife is as difficult to restrain as the wind itself. (The NIV uses the word quarrelsome.)

Here's how Proverbs 27:15-16 reads in the NKJV:
"A continual dripping on a very rainy day
And a contentious woman are alike;
Whoever restrains her restrains the wind,
And grasps oil with his right hand."
6. A book in the Hebrew Bible, or the Old Testament of the Christian Bible, tells of a woman yearning for the north wind and the south wind to blow on her garden. What's the name of the book?

The correct answer is Song of Solomon with the passage being the sixteenth verse of the fourth chapter.

Here's the verse, as per the NKJV:
"Awake, O north wind,
And come, O south!
Blow upon my garden,
That its spices may flow out.
Let my beloved come to his garden
And eat its pleasant fruits."

Notes in the NKJV Study Bible state this about the passage: "The bride is now ready to accept her lover for the first time to her garden. She calls on the wind to blow through. That is, she is ready to make love to her husband for the first time."
7. According to the second chapter of Daniel, a leader had a dream about a gigantic statue of gold, silver, bronze, iron and clay crumbling into dust and then being blown away by the wind. Who was the dreamer?

According to the second chapter of Daniel, Nebuchadnezzar called upon the magicians, the astrologers, the sorcerers, and the Chaldeans to tell him the meaning of his dream, this even though he refused to give them any details. They were unable to help the king and Nebuchadnezzar responded by ordering their execution. (According to notes in the NKJV Study Bible, Nebuchadnezzar reasoned that if the wise men could supernaturally interpret his dream, they should also be able to tell him the content of the dream.)

In desperation, he turned to Daniel, who is also known as Belteshazzar.

Daniel 2:31-35, tells of Daniel giving this explanation to the king: "This great image, whose splendor was excellent, stood before you; and its form was awesome. This image's head was of fine gold, its chest and arms of silver, its belly and thighs of bronze, its legs of iron, its feet partly of iron and partly of clay. You watched while a stone was cut out without hands, which struck the image on its feet of iron and clay, and broke them in pieces. Then the iron, the clay, the bronze, the silver, and the gold were crushed together, and became like chaff from the summer threshing floors; the wind carried them away so that no trace of them was found. And the stone that struck the image became a great mountain and filled the whole earth."

The chapter ends with the king singing the praises of God and Daniel. The end result was that the king promoted Daniel to a position of power.
8. The 27th chapter of Acts tells of a ship carrying the apostle Paul and 275 other people being tossed to and fro by a violent wind for no less than 14 days. Off what Mediterranean island did the vessel finally become a shipwreck?

The correct answer is Malta. There is only one mention of Malta in the entire English Bible and it appears in the 28th chapter of Acts, a Scripture telling of Paul and others surviving a shipwreck off the coast of the Mediterranean island. According to Scripture, Paul and his assistants spent three months on Malta. Scripture says Paul and his group were treated hospitably by the islanders.
9. According to Jude 1:12 in the NKJV, a certain type of people are like "clouds without water" blown about by the wind. Who are the people?

The correct answer is false teachers. The predominant theme of Jude is 'be on guard against false teachers'. In Jude 1:4, the writer warns: "For certain men have crept in unnoticed, who long ago were marked out for this condemnation, ungodly men, who turn the grace of our God into lewdness and deny the only Lord God and our Lord Jesus Christ."

Verses 12 and 13 go on to state: "These are spots in your love feasts, while they feast with you without fear, serving only themselves. They are clouds without water, carried about by the winds; late autumn trees without fruit, twice dead, pulled up by the roots; raging waves of the sea, foaming up their own shame; wandering stars for whom is reserved the blackness of darkness forever."
10. The following verse is from the first chapter of a book in the New Testament, as per the NKJV: "But let him ask in faith, with no doubting, for he who doubts is like a wave of the sea driven and tossed by the wind." In which book do you find this verse?

The correct answer is James with the passage coming from chapter 1, verse 6.

To put the verse into perspective, here's how Jude 1:2-8 reads in the NKJV: "My brethren, count it all joy when you fall into various trials, knowing that the testing of your faith produces patience. But let patience have its perfect work, that you may be perfect and complete, lacking nothing. If any of you lacks wisdom, let him ask of God, who gives to all liberally and without reproach, and it will be given to him. But let him ask in faith, with no doubting, for he who doubts is like a wave of the sea driven and tossed by the wind. For let not that man suppose that he will receive anything from the Lord; he is a double-minded man, unstable in all his ways."

Although the book is named after James, no one knows for sure who he was. Some believe the book was written by the half-brother of Jesus while others insist the brother of John was the author. Other possibilities are James, the son of Alphaeus, and James the father of the apostle called Judas.

Notes in the NKJV Study Bible also state James was a common name in the days of the early church. The beginning sentence in the book says "James, a bondservant of God and of the Lord Jesus Christ." With that claim, James could have been practically any Christian with such a name.
Source: Author Cowrofl 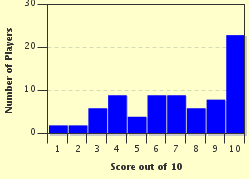