Infrared (IR) spectroscopy is used to determine the functional groups present in chemical compounds. The vibrations of different chemical bonds will absorb energy at different frequencies.

Quiz Answer Key and Fun Facts
1. As suggested by its name, an infrared spectrometer uses infrared electromagnetic radiation in its machine. This infrared radiation will result in which molecular activity?

The infrared radiation in an infrared spectrometer will result in molecular vibration because it is a low-energy radiation (the radiation with the greatest energy is gamma rays while the lowest is radio waves).

On the other hand, X-rays will result in molecular ionization. This is the fundamental principle that is used in mass spectrometer machines.

Molecular vibration needs the least energy, followed by molecular rotation and movement (transition). Molecular ionization requires the most energy.
2. One of the unit of measurement used for the wavelength of molecular absorption is micrometers. Its symbol is the Greek letter lambda. A more common unit is measured in cm^-1, which is defined as the number of complete loops in 1 cm. Its symbol is nu bar. What is this unit called?

If a wavelength is measured in micrometers, the value obtained is very small and it is very inconvenient to read and interpret the datum. Therefore, scientists have come out with another type of measurement, namely the wave number, which is measured in cm^-1.

For comparison, let's look at an example. 2.5 micrometer = 4000 cm^-1. The wavelength is 2.5 micrometer, or 0.0000025 meter, which is equivalent to 4000 cm^-1, which implies there are 400 complete loops in 1 cm.
3. Bond stretching frequencies depend on two major factors, namely atomic weight and bond stiffness. The frequency absorbed is directly proportional to the bond strength (stiffness) but inversely proportional to the atomic weight. Which of the following bonds will give the highest absorption frequency value?

A C triple bond C is stronger than a C double bond C, which is stronger than a C single C bond. Therefore, the C triple C bond will give the highest bond stretching frequency.
4. Depending on the location of the triple bond, the alkyne (C triple bond C) functional group gives different values of bond stretching frequency. Which type of alkyne will give higher frequency value? Terminal alkyne or internal alkyne?

This is because conjugation will result in the delocalization of electrons (electrons do not "stay" in just one place but they are resonated between two bonds).
6. A bond with more s character will absorb at higher absorption frequency since the s orbitals are closer to the nucleus of an atom compared to the p orbitals. Which of the following C-H bonds will give the highest absorption frequency?

The alcohol -O-H functional group will show absorption peak at 3300 cm^-1 while the carboxylic acid -O-H group will show its peak at 3000cm^-1.
8. Which of the following compounds will show two spikes at the -N-H stretching?

A primary amine's general formula is R-NH2. The two spikes come from the two hydrogen atoms attached to the N atom. A secondary amine's general formula is R2-NH. Only one spike will be shown at the -N-H stretching. On the other hand, the general formula for a tertiary amine is R3N. No hydrogen atom is attached to the N atom, so no spike will be shown.
9. A typical infrared (IR) spectrum is divided into 2 parts, namely the left part with the absorption peaks at 1400 -4000 cm^-1 and the right part with the absorption peaks at 600 - 1400cm^-1. Beginners in this field only study the left part. The right part is studied by expert spectroscopists. What is the name given to this right part?

The fingerprint region shows very complex patterns caused by symmetrical stretching, unsymmetrical stretching, scissoring, rocking, bending, wagging and twisting of the molecules' chemical bonds.
10. A C double bond O bond absorbs at 1710 cm^-1. It may indicate an aldehyde, a ketone, or a carboxylic acid. You are told that an unknown chemical compound contains only three elements, namely C, H and O. You run an IR test and notice that the IR spectrum does not show any peak at the 1710 cm^-1 region. This IR spectrum suggests that the compound will most probably be a (an) ___.

The functional group of esther contains C double bond O as part of its structure so it will absorb around 1710 cm^-1, too.
Source: Author Matthew_07 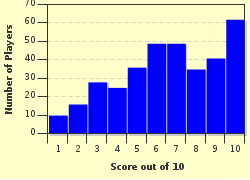 A collection of my chemistry quizzes encompassing the disciplines of organic and analytical chemistry. This list covers topics on elements, chemical functional groups, and specialized analytical techniques.