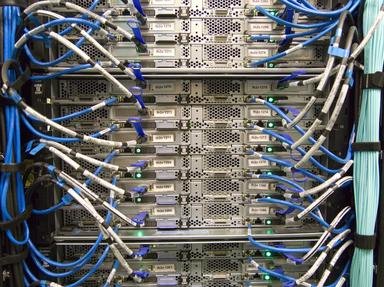 You hear these names on the radio and TV. You see them in newspapers, magazines and on the Internet but what do these companies actually PROVIDE? Take this quiz and see how much you know!

Quiz Answer Key and Fun Facts
1. Which Cupertino, California-based company is a manufacturer of computers, tablets and cell phones?

AOL, short for America Online, owns and operates web sites as well as providing news, entertainment, Internet access and Email service. Android is an operating system for mobile devices--it was developed by Google. AT & T, originally American Telephone & Telegraph, provides phone, data and TV service.
2. Which of the following, launched in 1985, is an operating system, or OS?

Microsoft WINDOWS in its various versions (Home, Office, etc) is an operating system. Microsoft WORD is a software package not an operating system. Opera is a web browser, and OP-X is a radio automation system. Unless you work in radio you probably will never hear the word OP-X or need to know what it does (or doesn't do).
3. Which of the following, which was released in 1995, is a web browser?

Opera is a web browser released by Opera Software Systems in 1995. It has less of the world market share than Google Chrome, Mozilla Firefox, Apple Safari and Microsoft Internet Explorer. In 2007 IBM released a software suite called Lotus Symphony which included a web browser but was mainly used for word processing and spreadsheets. IBM discontinued it in favour of Apache OpenOffice.
4. Which of the following would not be considered a website because it does not have a valid domain name?

A web site doesn't have to end in "dot com". Any web site ending in "dot ca" is usually a Canadian website. The "dot net" domain was originally intended for internet service providers and other networking technologies but is now used by other web site owners. "Dot org" is usually a domain used by nonprofit organizations but almost anyone can have a website ending in "dot org" now. Google.com is the name of a website, while Google.txt is the name of a document created with a Microsoft program called "Notepad."
5. Which of the following refer/refers to a word processing software package?

Apple Pages and Microsoft Word are both word processing applications and are very similar in nature. Microsoft Excel and Apple Numbers are spreadsheet applications. Wordpress is a website which allows people to create their own website or blogs (weblogs) mostly for free. Quickbooks is an accounting software package developed by Intuit.

It can be used for household finances or a business.
6. At the beginning of the 21st century there were two main manufacturers of microprocessors. One was Intel, based in Santa Clara, California. Which was the other one?

AMD is short for Advanced Micro Devices, Inc. It was founded in 1969 by businessman Jerry Sanders in Sunnyvale, California. Like Intel, based in Santa Clara, California, it is a publicly traded company.

AMC is a major movie theatre chain. MCA stands for Motor Club of America. MDA apparently stands for the Muscular Dystrophy Association or Missile Defense Agency.
7. Which of the following is a Japanese manufacturer of printers, scanners and desktop computers, founded in 1942?

Spelling is everything! Epson, also known as Seiko Epson Corporation, was founded in Nagano, Japan as Daiwa Kogyo, Ltd. Buddy Ebsen was the American actor known for among others, his roles as Jed Clampett and Barnaby Jones. Epsom is a town in Southeastern England. "Ipsum" is a Latin word meaning "one's self," such as "himself," "herself" etc. You may see the text "lorem ipsum dolor sit amet," which is a gramatically incorrect Latin dummy text used to demonstrate a system's text properties.
8. Which of the following was NOT part of a group of web browsers in the early 21st century?

Google Chrome, Mozilla Firefox and Apple Safari are three of the world's most-used web browsers. There was no browser called Firewall -- it's a term for a network security device designed to control incoming and outgoing web traffic. It can protect your computer, network or website from "undesirable" people and can also keep your children or employees from accessing networks you don't want them to.
9. Which is not a software "suite" or "package?"

Intel Pentium is a brand of microprocessor, not a software "suite" or "package." Adobe Photoshop, the oldest, was released in February of 1990 and is used for photo editing. Microsoft Powerpoint is used for slideshow-like presentations and Apple Garage Band is used for music production.
10. Which of these sites, founded in 2002, is considered a social networking site?

Just because a web site has a form of the word "social" or "network" does not mean it is a social networking site. Linkedin.com is a social networking site intended for advertising businesses and other organizations, advertising available jobs and finding employment. Netnanny.com, released in 1995, is the website of a company that makes software to help parents control their children's online activity.

Thesocialbutterfliesclub.com , founded in 2004, is an educational site for children. Thesociables.com website belongs to a Wisconsin-based southern rock band--the band was originally the 48th St. Rockers but changed its name in 1992.
Source: Author Snipercatcher 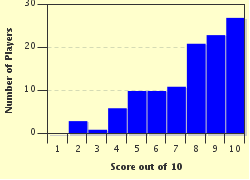