The Wonderful World of Isomers Quiz

Isomers are sets of molecules which have the same molecular formula but have different chemical structures. This quiz will cover these wonderful isomers.

Quiz Answer Key and Fun Facts
1. What is the name of the process of transforming a molecule into a new molecule which has the same number, but a different arrangement, of atoms?

An isomerization is simply the process of an atom forming an isomer. Many isomerization reactions are considered to be rearrangement reactions.
2. What are the names of the two classifications of isomers?

Constitutional isomers, also known as structural isomers, are unique molecules which have a similar molecular structure but the atoms or functional groups are joined together in different ways.

A spin isomer is a set of isomers where the nuclear spin of the hydrogen molecules is different.

Examples of tautomeric pair compounds include the ketone and enol pair and the amide and imidic acid pair. Tautomers play an important role in base pairing in DNA and RNA molecules.
5. Stereoisomers are sets of molecules where the molecular formula and atom arrangements are the same but are different in the orientations of the atoms in the three-dimensional space. Several classifications of stereoisomers exist. Which classification of stereoisomer contains a set of isomers which are non-superimposable mirror images of each other?

Enantiomers, also known as optical isomers, are sets of stereoisomers which are similar to each other by a reflection, meaning that they are non-superimposable mirror images of each other. Each enantiomer contains a stereogenic or chiral central atom where the different functional groups are attached. Enantiomeric pairs are labeled as a "right-hand" enantiomer and a "left-handed" enantiomer.
6. When two different functional groups are attached to the double bonds of stereoisomeric molecules, what terms are used to describe the relative orientation of the functional groups?

Pharmaceutical drugs are commercially available in both the racemic mixture and single enantiomer form. Examples of these drugs include thalidomide, ibuprofen and salbutamol.
9. Epirubicin and doxorubicin are drugs used in cancer chemotherapy. Are these drugs isomers of each other?

Epirubicin and doxorubicin have the same molecular formula and similar structural formulas. The hydroxyl group at the fourth carbon of the terminal sugar of these drugs has different geometric orientations in three dimensional space thus making these drugs stereoisomers.
10. Methods for separation of enantiomeric species or producing only one enantiomeric species have been developed. Which of the following is NOT a method of producing a single isomeric species?

Enantiomers are separated by using chiral stationary phase chromatography and they may also be separated through the formation of diastereomeric salts or enantioselective synthesis.
Source: Author workisboring 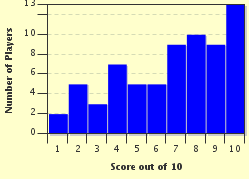