The functional groups are the foundation of organic chemistry knowledge... and can be quite fun!

Quiz Answer Key and Fun Facts
1. One of the most basic functional groups involves only carbon-carbon double bonds. What is this group called?

A double bond consists of both a pi bond and a sigma bond, which makes it particularly strong. The pi electrons can act as a nucleophile, making alkenes more reactive than alkanes.
2. Perhaps most well known for its presence at parties, this functional group consists of OH bonded to an R group ("rest of the molecule").

Consumable alcoholic drinks contain ethanol, while other alcohols like methanol and isopropyl alcohol are used in many common household products.
3. Simply consisting of a C to O double bond (with two R groups bonded to the carbon), this functional group is present in many sugars.

Ketones are very important classes of molecules for human and animal biology. They play a large role in fat and carbohydrate metabolism. In addition, one of the most widely known ketones, acetone, is used commercially as a nail polish remover and paint thinner.
4. The carboxylic acid functional group is called an "acid" because of a carbon to nitrogen triple bond.

A carbon to nitrogen triple bond is cyanide (or nitrile with an R group). Carboxylic acids are acidic because they are proton donors. They consist of a carbon double bonded to one oxygen and single bonded to another, which is bonded to a hydrogen atom (the acidic hydrogen).
5. Quite simple, this group consists of a nitrogen atom bonded to three R groups.

Ethoxide would be a pretty funny name... Ester compounds often end in -oate, such as ethyl heptanoate, which gives raspberries and other fruits their flavor. They provide the pleasant odors of many other fragrant fruits as well, such as bananas, apples, and cherries.
7. An ether is one of the simplest functional groups, with a general formula of R-?-R. Which atom fills in the place between the R groups, and because of its difference in electronegativity from carbon, creates a dipole?

Ethers are great lab solvents, but are VERY flammable! Diethyl ether was used in the 1800s as a surgical anesthetic, but because of its flammability and negative side effects, modern anesthetic agents have replaced it.
8. This aromatic, planar ring of six carbons with an R group bonded to one of them is one of the most important groups for its numerous lab and practical uses.

Phenyl rings are often depicted as a hexagon with an inscribed circle or with alternating double and single bonds, but because of electron delocalization, the bonds all have a bond order of approximately one and a half. Because of its aromaticity, a phenyl ring is quite stable and requires harsh conditions (high heat, concentrated acids, etc.) in order to react.
9. How many nitrogens make up an Azide functional group?

These are very reactive, which is why they are also called "acid chlorides." Acyl chlorides are quite useful laboratory reagents for their superb reactivity in nucleophilic substitutions (resulting in high yields), allowing amides, esters, carboxylic acids, etc. to form.
Source: Author goober123 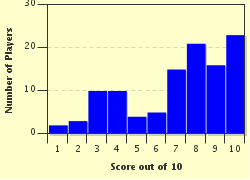 
Other Destinations
Explore Other Quizzes by goober123