The study of hydrocarbons is the study of the most complex and interesting combinations that carbon and hydrogen form. Enjoy the quiz!

Quiz Answer Key and Fun Facts
1. What is the molecular formula of propane?

Propane is an alkane, or a hydrocarbon that is composed of only single bonds. The prefix prop- refers to three, and a propane molecule therefore has three atoms of carbon. Because the number of hydrogen atoms is equal to the sum of 2 and twice the number of carbon atoms, there are 8 hydrogen atoms in propane.
3(2) + 2 = 8
2. What does the complete combustion of a hydrocarbon always yield?

If you want to argue that combustion can form carbon monoxide and water, you are correct. However the question was COMPLETE combustion, which will yield carbon dioxide.
3. Which of the following examples is a possible name for a hydrocarbon with a molecular formula of C5H10?

Carbon is an element of group IVA of the periodic table, and therefore it has four valence electrons. This means that it can have up to 4 covalent bonds.
(example CH4 - One carbon atom has combined with 4 hydrogen atoms, which can only form one bond each).
5. The prefix for an alkene with 10 carbon atoms is Dec-

Correct!
Dec represents 10 (decathlon - decameter - decagon).
An alkene with 10 carbon atoms is decene. An alkane is decane, and an alkyne is decyne.
6. Some hydrocarbons react with water to form alcohols.

The following reaction will take place :
CnHx + H2O ---> CnHx-OH
The OH in this product is the functional group for an alcohol.
7. What is an alkyne?


Answer: A hydrocarbon in which two carbon atoms have a triple bond with one another.

An alkyne has a formula of Cx - H2x-2.
Propyne, for instance has a molecular formula of C3H4.
8. A cycloalkane will have the same carbon-hydrogen ratios as an alkyne.

A cycloalkane is an alkane in which the all carbon atoms each attach themselves to one another, unlike regular alkanes which are open-ended. Each carbon atom will then have two bonds left to accomodate hydrogen atoms. Therefore the ratio of hydrogen to carbon is 2-1, or the same as that of an alkene, not an alkyne.
9. Methane has which of the following molecular formulas?

Septone is an entirely made up word. Methene and methyne cannot possibly exist because there is only one carbon atom when the prefix is a meth-, and therefore it is impossible for any double or triple bonds to occur.

Thank you for you playing!
Source: Author dim_dude 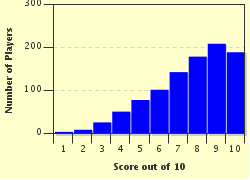 
Other Destinations
Explore Other Quizzes by dim_dude