This, my 20th sci/tech quiz, is on the many functional groups found in the world of organic chemistry. I hope you find it enjoyable!

Quiz Answer Key and Fun Facts
1. In organic chemistry, the reactions of many molecules are dependent upon the functional group. The functional group can also affect physical properties. What characteristic of a carboxylic acid gives the molecule a much higher boiling point than many other molecules of similar molecular weight?

Carboxylic acids are commonly written in short as R-COOH or R-CO2H, where R stands for an alkyl chain/group (hydrocarbon chain/group). A simple laboratory test for the presence of a carboxyl group in a compound is to react the compound with sodium hydrogen carbonate (NaHCO3) or sodium carbonate (Na2CO3). If the carboxyl group is present effervescence of carbon dioxide (CO2) will take place. To ensure that the gas evolved is indeed carbon dioxide, run the gas through lime water which will turn milky. Carboxylic acids have higher boiling points than would be expected by the hydrogen bonding present. Hydrogen bonding is the bond between an atom of hydrogen with another atom of either oxygen, nitrogen or fluorine.

The existence of an amino acid as a zwitterion allows the constituents of protein to be used as a buffer which keeps pH constant in a variety of chemical environments. It can be used as a buffer due to the presence of the two functional groups mentioned above, the carboxyl group and amine group.

This results in the pH remaining the same. The same takes place when an acid (H+) is added to a solution. The carboxyl group (in zwitterion form is COO- as it has donated a proton) reacts with the acid to again form water maintaining pH levels.
3. A carboxylic acid can be used to derive many different organic molecules. For example, a primary alcohol such as ethanol can be synthesised by reducing a carboxylic acid. What is the essential reducing agent used in this organic reaction?

There are a few conditions that need to be satisfied with the use of LiAlH4 which include the need for the reduction reaction to take place in dry ether. This is necessary because LiAlH4 is highly reactive with water.

The formula for the alcohol series is R-OH (-OH is the hydroxyl functional group) with methanol having the formula CH3OH and ethanol, C2H5OH. Potassium dichromate, which must be acidified, is used for the opposite oxidation reaction which synthesises a carboxylic acid from a primary alcohol. Concentrated sulfuric acid and concentrated nitric acid are needed to form a nitronium ion (NO2+) for use in the nitration of benzene.
4. Organic chemistry is really a series of connections and there is often more than one way to synthesise a particular compound. The answer to this question is one such example. You can reduce a carboxylic acid to a primary alcohol and you can oxidise that primary alcohol back to a carboxylic acid. However, what organic compound do you get when you react a carboxylic acid with an alcohol?

When a carboxylic acid reacts with an alcohol in the presence of some concentrated sulfuric acid (H2SO4), an ester (R-COO-R') is formed with a by-product of water. This reaction is an equilibrium which is why it is reversible. An ester can be hydrolysed back to an alcohol and a carboxylic acid or carboxylate salt with the use of both an acid and a base.

In acid hydrolyis of an ester a carboxylic acid is formed with concentrated sulfuric acid as the catalyst and in base hydrolysis a carboxylate salt is formed by the use of sodium hydroxide as the catalyst (NaOH). An ester can also be formed by reacting an acid chloride with an alcohol or phenol.
5. Sometimes the field of organic chemistry can be confusing and a perfect case illustrating this is the difference between an alcohol and a phenol. When you look at the functional groups in each of these molecules, diagrammatically they look very similar. However there are some differences which make the two groups react quite differently. Which of these two groups is distinguished by the formation of a purple complex when neutral iron (III) chloride is added?

The representation of the alcohol series is R-OH (-OH is the hydroxyl functional group) whilst a phenol is written as C6H5-OH or just C6H5OH. The main difference between these two is that the hydroxyl group in phenol is attached to a conjugated (alternating double and single carbon to carbon bonds) benzene ring; stabilised by pi delocalised electrons giving rise to resonance energy.

In an alcohol the hydroxyl group is not attached to an aromatic ring such as benzene but to an alkyl chain (hydrocarbon chain).

Despite alcohols and phenols both being somewhat characterised by the presence of an hydroxyl (-OH) group, it is what the hydroxyl group is attached to that determines the reactivity of the compound.
6. Organic chemistry is known for its complicated diagrams and also for its many mechanisms. What type of reaction has taken place if chlorobenzene (C6H5Cl) has been synthesised from an initial molecule of benzene (C6H6)?

The chlorination of benzene to form chlorobenzene is achieved by reacting chlorine (Cl2) with benzene in the presence of a catalyst of iron, aluminium or their respective metal halides. As the diatomic chlorine approaches the stable benzene ring it becomes polarised and one of the chlorine atoms develops a partial positive charge.

This is known as an electrophile and in this case an electrophile will react with the delocalised electron cloud of benzene. It is a substitution reaction rather than an addition because an atom of hydrogen on the benzene molecule is substituted by the chlorine.

This reaction can also take place with another halogen, bromine. For those, like myself, who prefer the inorganic side of chemistry, hydrochloric acid (HCl) is given off as a by-product.
7. Many of the series of compounds that constitute the field of organic chemistry contain the same functional group. The group in question is 'C=O' which is essentially a double carbon to oxygen bond with two side groups attached to the carbon atom. What is the name of this functional group?

The carbonyl functional group is present in, amongst other compounds, aldehydes, ketones, esters, carboxylic acids and amides. The carbonyl group is easily detected by the use of modern spectroscopic methods particularly nuclear magnetic resonance (NMR) and infrared spectroscopy (IR).

In IR spectroscopy the C=O group is distinguished by a spread between 1600-1900 wavenumbers (though there is variation in these statistics). The peaks and spreads are brought about by the absorption of light in the infrared division of the electromagnetic spectrum.
8. Nitrobenzene (C6H5NO2) can be used in a reaction to synthesise a compound known as phenylamine (C6H5NH2). In this reaction, which of the following is used in some form?

There are two stages to this reaction and the first is the reduction of nitrobenzene into ions of phenylammonium. The reaction requires tin (which will be oxidised to tin ions) and hydrochloric acid (HCl) and is refluxed for anything between twenty to forty minutes.

It requires a second stage due to the production of phenylammonium ions that I mentioned above. Instead of forming the wanted product, phenylamine, the acidic conditions of the reaction provided by the hydrochloric acid results in the nitrogen atom obtaining an H+ ion. So, to convert phenylammonium to phenylamine the H+ needs to be removed and that is achieved by adding a base such as sodium hydroxide (NaOH).

In theory this reaction is made to look rather straightforward, but, it can be particularly tricky!
9. In general, the first two organic families that a student of chemistry comes across are the alkanes and the alkenes. Which of these two contain a double carbon to carbon bond?

In both alkanes and alkenes there commonly exist single carbon to hydrogen bonds. Some examples of simple alkanes include methane (CH4), ethane (C2H6) and propane (C3H8).

There is a test to distinguish between alkanes and alkenes and that is to add bromine water (Br2). If an alkene is present the yellow solution of bromine water will turn colourless; an alkane will not change the colour.
10. Amino acids are essential to life in that they are what make up proteins. Without proteins, the world as we know it would be a barren, lifeless entity. Amino acids can "join" together to form chains of amino acids. What is the bond that is formed between two amino acids specifically called?

A peptide bond is what allows amino acids to form dipeptides and polypeptides. The bond is represented by CO-NH where the carbon to oxygen bond is formed from the carboxyl group (R-COOH) of one amino acid and the nitrogen to hydrogen bond from the amine group (R-NH2) of the other amino acid. Amino acids include glycine, alanine and phenylalanine the latter of which contains a conjugated benzene ring.

I hope you enjoyed the quiz and thanks for playing!
Source: Author jonnowales 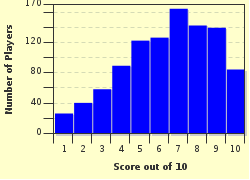