The Chemistry of Benzene Trivia Quiz

Benzene is a fascinating molecule which has caused many a chemist confusion in the past. Play this quiz to find out why and maybe even enjoy it along the way!

Quiz Answer Key and Fun Facts
1. The history of the chemical benzene is rather interesting in that it proved devilishly difficult to ascertain its structure. What was the name of the scientist who came up with the first plausible arrangement of benzene?

The structure was later named after Herr Kekulé, a German organic chemist. Kekulé suggested that benzene consisted of alternating single and double carbon to carbon bonds. As such this suggested that the molecule was a triene (an alkene with three double bonds), but, this was where everything started to go wrong. If it was an alkene, benzene would undergo electrophilic addition, but, it doesn't.

The dejected organic chemists would have to go back to the drawing board to try to break the benzene code!
2. Benzene, also known as benzol, is a chemical that is known as a planar hexagonal ring and it consists of two different types of atom. Apart from carbon, which of the following elements is a constituent of benzene?

Benzene is a hydrocarbon compound which means it consists of hydrogen and carbon atoms only. It has the formula C6H6 which suggests a certain instability, but how wrong that assumption made by a myriad of chemists was! Each carbon is bonded to another two carbons by single bonds which results in a cyclic formation. Bonded, again by single bonds, to each of the carbon atoms is a single hydrogen.
3. Benzene is more stable than what chemists first believed as it has a cloud of delocalised electrons. This cloud of electrons is formed by overlapping p-orbitals and is known by what Greek letter?

Carbon atoms can bond to four other atoms, but, within a benzene molecule they are only bonded to three other atoms. This means that there is an unpaired electron spinning around in a p-orbital*. These unpaired electrons overlap with each other thus forming a pi delocalised electron cloud. Subsequently, the stability of the molecule increases due to a resistance to certain types of chemical reactions. This structure accounts for all the problems Kekulé and his fellow chemists encountered.

TNT, or trinitrotoluene, is basically a benzene molecule that has undergone various substitution reactions. Benzene loses four hydrogen atoms and they are replaced by one methyl group (CH3) and three nitro groups (NO2). TNT, commonly mistaken as dynamite, was used in military warfare as an important explosive material. Factory workers who handled TNT during WWI were nicknamed 'canaries' after the poisonous chemical had turned their skin bright yellow.
5. When a molecule of benzene partakes in an electrophilic substitution reaction a derivative of formula -C6H5 exists. Therefore, in a monosubstituted molecule of benzene, what is the name given to -C6H5?

A phenyl group is the part of, in this instance, the benzene molecule that remains after one of the six original hydrogen atoms has been substituted. The phenyl group is a part of a broader chemical category, the aryl group, which is the group containing all functional groups that are derivatives of simple arenes.
The methyl functional group is represented by the formula -CH3, hydroxyl by -OH and carboxyl by -COOH.
6. Due to benzene having a cloud of delocalised electrons, the molecule is more stable. This stability generated by delocalisation is known as what type of energy?

Resonance energy, also known as delocalisation energy, prevents the benzene molecule from undergoing certain chemical reactions such as electrophilic addition. However, benzene is still a reactive species and can form other molecules such as nitrobenzene and methylbenzene.
7. An example of the electrophilic substitution reactions of benzene is halogenation. Which of the following chemical elements could be the substitute of the hydrogen that is lost during the reaction?

Of the four possible answers only one of them, chlorine (Cl) is a halogen. The halogens occupy group 17 of the periodic table and members also include bromine (Br) and iodine (I). The product of the halogenation of benzene with chlorine is chlorobenzene and the catalyst used can be iron (Fe), aluminium (Al) and their respective metal halides.
8. The molecule benzene can undergo a chemical reaction known as nitration. To carry out this reaction there is need for the presence of two concentrated acids. Nitric acid is one, but, what is the other?

The two concentrated acid, sulfuric and nitric, form a nitrating mixture when composed in equal molar quantities. The subsequent reaction with benzene takes place at 55 to 60 degrees centigrade and results in the formation of nitrobenzene.

For further information on one of the options, the IUPAC (International Union of Pure and Applied Chemistry) officially name CH3CH2COOH, propanoic acid. This chemical however can also be called propionic acid.
9. During the nitration of benzene, the two acids involved react to form a cation. The formula of this positive ion is NO2+, but, what is the name of this?

The nitronium ion (NO2+) plays an important part in the electrophilic substitution mechanism of the nitration of benzene. As the electron deprived nitronium ion nears a benzene molecule which contains many delocalised electrons, they react. The nitronium ion joins the benzene structure and it subsequently develops a positive charge.

In order to stabilise the molecule, a hydrogen atom has to be sacrificed and reacts with HSO4- (bisulfate ion) to from sulphuric acid. The electrons from that hydrogen atom are used to restore the neutrality of the delocalised system.

After the nitration reaction, nitrobenzene is formed.
10. Due to its cyclic structure with a surrounding cloud of delocalised electrons, benzene is accurately described by which of the following chemical adjectives?

Aromatic, in the chemical sense, is really rather odd. You may think well of course, it is chemistry, what's new? Well, this one really does take the biscuit and can be confusing. Chemical aromaticity doesn't actually involve smell! The German scientist who coined the term, von Hofmann, gave the adjective to some compounds that didn't actually have a smell at all. It actually refers to molecules that contain a cyclic phenyl radical (-C6H5) such as benzene. Terpenes, which are chemicals used in perfumery, aren't aromatic in the chemical sense. The more one goes on, the more one thinks how incredibly rubbish the adjective is!

Thanks for playing the quiz and I hope you enjoyed.
Source: Author jonnowales 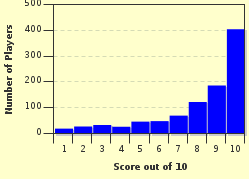