This is a basic introduction to alkanes in organic chemistry. This may seem a bit dry, but real chemists should enjoy it. How well do you know your hydrocarbons?

Quiz Answer Key and Fun Facts
1. Alkanes contain hydrogen and carbon atoms with which of the following bonds connecting the carbon atoms together?

Alkanes are given the name alkanes due to the fact that they only contain single bonds. Compounds containing double bonds between carbon atoms are known as alkenes.
2. Hydrocarbons containing triple bonds are called _________.

Acetylene torches use the most basic alkyne, ethyne. This is more commonly known as, you guessed it, acetylene. It has the formula C2H2.
3. (CH3)3CCH2CH3 is named what, according to IUPACs naming system?

When naming a compound, find the longest carbon chain possible. Here it consists of 4 carbons. Then number the carbons of the chain according to where the branched groups are attached giving the lowest number carbon. Since the longest chain has 4 carbon atoms, the 2 methyl groups are found on the 2nd or 3rd carbon depending on numbering. Since 2 is lower than 3, the name is determined.
4. C5H12 has how many constitutional isomers?

Isomers that differ in the order in which the atoms are connected are known as constitutional isomers. This particular compound has 3: pentane; 2,2-dimethylpropane; & 2-methylbutane. It helps to sketch them out so you do not count more than one isomer.
5. Using IUPAC naming, what is the name for the molecule having a methyl (CH3) group attached to an 8-carbon alkane ring?

An alkane ring with 8 carbons has no double bonds and has the name cyclooctane. Since adding a methyl group automatically gives that carbon of the ring connected to it the number 1 position, we get methylcyclooctane. If there were more than one group attached to the ring, the name would change dramatically. Cyclooctanol is an alcohol, cyclooctene is an alkene, and boric acid is good for getting rid of pavement ants!
6. A primary carbon atom is bonded to only 1 other carbon atom. What is a carbon atom bonded to 4 other carbon atoms called?

Non-polar compounds dissolve in like, as do polar compounds. Water is highly polar, benzene is non-polar and alkanes are non-polar. Therefore, alkanes will dissolve in benzene and not water. Hydrophobic literally means to be afraid of water and this describes alkanes very well.
8. Which of the following would be most likely to react with methane?

Alkanes are not highly reactive but do undergo halogenation reactions. Methane, CH4, will react with chlorine gas, Cl2 (with heat or light), to produce chloromethane, CH3Cl, and hydrochloric acid, HCl. Chloromethane can then undergo halogenation, and so forth. Benzene, C6H6, methanol, CH3OH, and acetone, (CH3)2CO do not react with methane.
9. The waxy coating of leaves for many plants are alkanes.

This coating is believed to prevent the plants from losing water. One alkane, hentriacontane, CH3(CH2)29CH3, is 1 component of the leaf wax of tobacco plants and is also found in beeswax.
10. Haloalkanes, or alkyl halides, are compounds in which a hydrogen atom is replaced by an halogen atom. Therefore the functional group is a halogen atom bonded to what type of hybridized carbon atom? 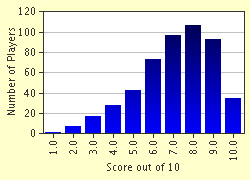 
Other Destinations
Explore Other Quizzes by scottycan