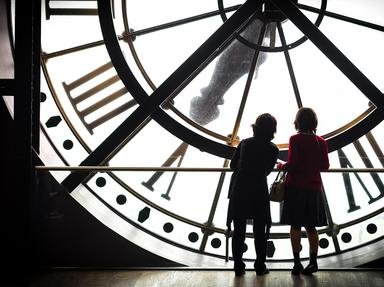 Up To Scale Trivia Quiz

I give you the scale and you match it to what it measures.

Share on Facebook
Share on Twitter
Share by E-Mail
Author
nyirene330
Time
4 mins
Type
Match Quiz
Quiz #
384,085
Updated
Dec 03 21
# Qns
10
Difficulty
Average
Avg Score
7 / 10
Plays
466
Mobile instructions: Press on an answer on the right. Then, press on the gray box it matches on the left.
(a) Drag-and-drop from the right to the left, or (b) click on a right side answer box and then on a left side box to move it.

The Mohs scale measures the hardness of minerals by determining scratch resistance. The scale runs from 1 to 10, with 1 being the softest and 10 the hardest. The minerals are ordered as follows: (1) talc; (2) gypsum;
(3) calcite; (4) fluorite; (5) apatite (no pun here); (6) orthoclase/feldspar; (7) quartz; (8) topaz; (9) corundum (with rubies and sapphires as varieties);
(10) diamond - the hardest known natural material.
2. Fujita

The severity of tornadoes is measured by the Fujita scale. The rating goes from 0 to 6, depending upon the damage caused to man-made structures and vegetation, e.g. trees. F0 represents light damage with a wind speed* of less than 73 miles per hour; F2 is moderate damage (73-112 mph); F3 for considerable damage (113-155 mph); F4 is for severe damage (158-206 mph); F5 represents devastating damage (207-260 mph); F6 brings incredible damage (with wind speeds of 261 to 318 mph) causing houses to be leveled, cars thrown about and trees uprooted. *Note: the wind levels are estimates.
3. Scoville

Created by Sir Francis Beaufort (1774-1857), the Beaufort scale measures wind speed in knots. Used in marine forecasts, the scale ranges from 0, which represents 0 knots and calm/glassy seas, to 12 for over 60 knots, hurricane conditions and "perfect storm" seas.

The chart includes both the wind description and the corresponding sea description, e.g., at 5 knots there is a light breeze coupled with smooth seas and wavelets, while at 37 knots there are gale force winds and very rough, high seas. Level 12 registers hurricane winds in excess of 64 mph, with waves over 45 feet high and very little visibility...a good day to stay indoors!
5. Saffir-Simpson

The Saffir-Simpson Hurricane Wind Scale uses five categories to measure sustained wind speed and estimate the potential danger and damage. Even the lowest Category 1 and 2 storms are dangerous, with winds from 74-95 mile per hour winds and property damage up to 96-110 mph winds and extensive property damage, respectively. Hurricanes reaching Category 3 and higher represent devastating and catastrophic damage to property, power outages and potential for loss of lives.
6. Brannock

On a calmer note, to the agony of the feet...we have the Brannock device, invented by Charles F. Brannock, which uses the Brannock scale to measure feet for proper shoe-fitting. The device is used to measure both feet and uses the dimensions of the larger foot for the correct size.

It consists of a left and right heel cup and a movable width bar, with sizes going up to 16 and widths to EE. You put your feet in it (one at a time) and the salesman does the measurement. The accuracy of the measurement is around 95%, and they were, at one time, used in all the finer shoe stores.
7. Richter

Contrary to the belief of some, the Richter scale was not invented by comedian Andy Richter. Rather, it was developed by Charles F. Richter (1900-1985) in 1935. Richter was a geologist who created a scale for measuring the magnitude of earthquakes, i.e., force and duration, on the basis of seismic waves or oscillations.

The ratings range from 1-10 with each level ten times greater than the previous one. Levels 1-4 indicate small frequent earthquakes with little movement; Levels 5 and 6 are moderate, occurring from 10 to 30 years apart, with strong and sudden movement. Major, Great and Super earthquakes (levels 7-10) occur infrequently but are devastating (e.g., Chile in 1960).
8. Hamilton

The Hamilton Rating Scale for Depression (HRSD or HAM-D) is used by health care professionals for rating a patient's level of depression, before, during and after treatment. The scale was developed in 1960 by Dr. Max Hamilton of the University of Leeds, and is used in clinical practice.

University of Stanford psychologist Louis Terman (1877-1956) modified the Binet-Simon Intelligence Scale developed in 1905 by Alfred Binet and Theodore Simon. The new, modified version, first used in the United States in 1916, was called the Stanford-Binet Scale.

If you've ever taken a survey of any kind, you have most likely come across the Likert Scale which measures survey responses and people's attitudes. The 'psychometric' scale was invented by psychologist Rensis Likert (1903-1981). The scale was first used in 1932 in questionnaires with the format using five levels: 1. Strongly agree; 2. Agree; 3. Neither agree nor disagree;
4. Disagree and 5. Strongly disagree. Occasionally, the scaling omits the middle option, resulting in the "forced choice" method. The Likert Scale is the most commonly used in survey research.
Source: Author nyirene330

This quiz was reviewed by FunTrivia editor rossian before going online.
Any errors found in FunTrivia content are routinely corrected through our feedback system.
Most Recent Scores
Jan 03 2023 : Pacca: 5/10
Dec 12 2022 : Guest 81: 0/10 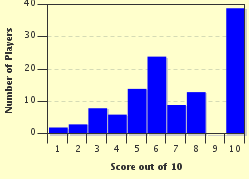 Related Quizzes
1. Another Measure for Measure Very Easy
2. Units in Electronics Easier
3. Measure for Measure Easier
4. A Scale Model Easier
5. How Fast, How Strong, How High Easier
6. How Hot or Cold is it? Average
7. Metric Prefixes (Positive Exponents) Average
8. Metric Prefixes (Negative Exponents) Average
9. Troy Weights and Other Measures Average
10. Cookin' Up Measurements in the USA Average
11. The Space Between Average
12. A Long History in Measuring Time Average