Can you find the number that matches each description?

Quiz Answer Key and Fun Facts
1. The only integer which is neither positive nor negative.

If your Greek is good, you should recognise the prefix used to describe a polyhedron with twenty sides. A regular icosahedron has equilateral triangles for its faces, with five triangles meeting at each of its twelve vertices.
5. The fifth triangular number.

A cube is a three-dimensional figure made up of 6 squares - a standard die is probably the most familiar example. A cuboid is a similar shape, but with some or all of the faces being rectangles instead of squares - think of a ream of paper, for example.
7. Number of equal sides in an isosceles triangle.

A triangle with no equal sides is called a scalene triangle, while one with all three sides equal is an equilateral triangle. As well as names describing the relative lengths of a triangle's sides, they can also be given a name that tells you the size of the largest of the three angles: for an acute triangle, all angles are less than 90 degrees; for a right angled triangle, one angle is 90 degrees; for an obtuse angled triangle, one angle is between 90 and 180 degrees. Since the sum of the three angles in a triangle is always 180 degrees, no one angle can be as large as 180, let alone larger than that.
8. Number of vertices on a cube.

The vertices are often referred to as corners in everyday usage, but mathematicians prefer the technical term vertex to refer to a point where two or more faces of a polyhedron meet. For a cube, there are three square faces meeting at each vertex.
9. The only positive integer which is neither prime nor composite.

As described earlier a point can be translated to generate a line, which can be translated to generate a plane. If we only use a segment of the line, we can translate it so as to form a square. If that square is moved upwards, in a third dimension perpendicular to that of the original plane, we can produce a cube. Now, mathematically (if not physically), that same process can be repeated using a fourth dimension that is orthogonal to the cube, called a tesseract.
Source: Author looney_tunes 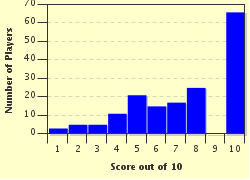 Related Quizzes
This quiz is part of series Maths Challenges:

A collection of quizzes aimed at players with a high school level of mathematics who are interested in exploring the world of mathematics.