Some sports, such as baseball in the United States, are traditionally considered to be a country's national sport. Other countries, however, actually pass legislation, "de jure", to establish a national sport by law. Let's have a look at some of them!

A combination of polo and baseball, pato is played from horseback. Meaning "duck", in the beginning the game used a live duck in a basket instead of a ball! Dating back to 1610, originally the playing field could cover several ranches; the first gauchos to get the duck in the basket back to their ranch were declared the winners! It was a free-for-all, with violence between the teams being common.

In the 1930's the modern rules were written, and in 1953 pato was named the national sport of Argentina.
2. Volleyball

Interestingly, while volleyball was recognized as the national sport of Sri Lanka in 1991, cricket is said to be far more popular. Volleyball was introduced to Sri Lanka in 1916 by R. W. Camack, who was the Director of Physical Education at the YMCA in Colombo. The Sri Lanka Volleyball Federation, with 62 affiliate organizations, is the main governing body of the sport.
3. Sloop Sailing

A sloop is a sailing boat that has only one main mast; the Bermuda rig is the most common type used in modern sailboats. Developed as early as the 17th century, the Bermuda rig works well in the type of wind and water found in the Bahamas. Over time, sloops have become important to naval operations; they were used as communication vessels and for reconnaissance.

In 1993, sloop sailing became the national sport of the Bahamas.
4. Arnis

Arnis is a type of martial art that uses weapon-based fighting with knives, sticks, and other implements. Although it was not called by its current name at the time, when the Spanish arrived in the Philippines in the 1600s, they saw an early type of the sport. Meaning "armor" in Spanish, it was the sport of the common class of people.

In fact, some theorize that this skill is what brought an end to the life of Ferdinand Magellan, who was killed in the Philippines during his voyage of circumnavigation. Arnis became the national sport of the Philippines in 2009.
5. Rodeo

Differing from rodeo in North America, Chilean rodeo is a team sport. Two riders in traditional gaucho clothing riding Chilean horses attempt to pin a calf in a corral called a "medialuna" against a cushion, gaining points for the proper herding of the animal. Originating in the 16th century, the sport was originally associated with a cattle roundup and subsequent branding.

A law regulating the roundup was passed in 1927, and put the event under the management of the Chilean army; in 1962 Chilean rodeo became the country's national sport.
6. Capoeira

A type of martial art in Brazil, Capoeira combines a touch of dancing, music, and acrobatics. Believed to have been developed first by African Angolans at the beginning of the 16th century, the accepted translation of the term "capoeira" means "it was jungle".

This refers to areas of low vegetation where runaway slaves would hide. The movements of the sport are very fast; it employs kicks, spins, and other techniques. Identified as the national sport in 1972, it was given the status of "intangible cultural heritage" by UNESCO in 2014.
7. Varzesh-e bâstâni

A traditional way to train warriors in Iran, varzesh-e bâstâni has been a recognized national sport since 1972. It has been recognized by UNESCO as being among the "the world's longest-running forms of such training", blending elements of martial arts, calisthenics, strength training and music. Especially popular in the 19th century, the Shah of Iran would hold competitions at his palace, and distribute awards himself. Wrestling and polo are also recognized as national sports in Iran.
8. Lacrosse

Actually, Canada has two seasonal national sports - lacrosse in the summer and ice hockey in the winter. An invention of the Iroquois Native Americans in the Northeast U.S. and southern Quebec and Ontario, it is believed that the sport may date back as far as 1100.

Originally it must have been some free-for-all! Two teams of 100-1000 men each would play from sunrise to sunset for two or three days during a religious ritual, during which they played "The Creator's Game". French missionaries saw and named the game in the early 1600s. First declared the national game of Canada in 1859, the Canadian Parliament made it official in 1994.
9. Kabaddi

With a name meaning "to hold hands", Kabaddi originated in ancient India and became popular in South Asia, where it is known by many different names. In this sport, two teams take turns sending a raider into the other team's half of the court in an attempt to touch the players - in the time it takes to inhale one breath and get back to his own side! The raider is given points for the number of people he is able to touch; the other team doesn't just stand there - they try to tackle the raider in order to gain points.

A Bangladesh version of Kabaddi is called Ha-Du-Du; the rules of the game vary according to the region. Kabaddi became the national sport of Bangladesh in 1972.
10. Tejo

There is much discussion regarding the origin of the sport called tejo in Colombia; some believe that native people there began playing as long ago as five hundred years. Colombia, along with some South American neighbors, has professional sports teams that compete.

The objective of the game is to throw a metal puck called a tejo across the playing field with the intention of hitting a metal pipe; in the past, the targets, called "mechas", contain a bit of gunpowder so that there is a small explosion when they are hit. Today, electronic sensors are used. Recognized as the national sport in Colombia since 2000, this is a sport that can be enjoyed by people of all ages.
Source: Author ponycargirl 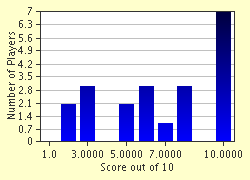 See what you know about a variety of sports topics!