This quiz is about the English series of "InuYasha" and will cover the basics. I hope it will not be too difficult. Have fun and enjoy!

Quiz Answer Key and Fun Facts
1. What is the name of the well Kagome and InuYasha pass through to go from the feudal era to the present day era?

It is called this because when a demon passes through the well, they disappear as if their bones were eaten by it. This is a key part of the show as it is the reason Kagome met InuYasha.
2. Miroku's right hand has the wind tunnel.

For this question, you just have to pay attention to the show. Naraku cursed Miroku with the wind tunnel and it grows over time. If Miroku doesn't destroy Naraku, he will be consumed by his own wind tunnel.
3. How many times was Kikyo reborn?

This happened only once by a witch who brought Kikyo back from the dead by using her bones and graveyard soil and then taking Kagomes soul and puting it in Kikyo. Kagome tried to get her soul back from Kikyo but did not get it all. so both continued living on.
4. Who is InuYasha's older brother?

He hates Inuyasha because their father gave Inuyasha the powerful Tetsusaiga which can kill 100 demons at once, and only gave him the Tensaiga which can not harm the living, but can harm the dead and bring people back to life.
5. What is the attack InuYasha learns after defeating Ryukotsei?

He learned the Wind Scar after Sesshomaru used the Wind Scar against InuYasha when he took he Tetsusaiga during battle and learned that there was a barrier that didn't allow him to hold it. InuYasha learns the Adamant Barrage during the battle with Naraku at his father's grave.
6. What is the name of the flea that runs away from danger?

Myoga served InuYasha's father and now InuYasha. He runs away from danger before it even comes and is never much help to InuYasha and the others. Myoga informs InuYasha and the others of information they need to know and places which are too dangerous for them to visit, although they never listen and go off anyways.
7. Whose name used to be Onigumo?

Onigumo was a human who was in love with Kikyo, but he was terribly injured. He had hundreds of demons eat him and then Naraku was born. Naraku is the main villain in the show. Naraku was the one who put the wind tunnel in Miroku's right hand, took control of Kohaku's mind and put InuYasha and Kikyo against each other 50 years ago.
8. Where was the path to the grave of InuYasha's father hidden?

The path to the grave of InuYasha's father was in the black pearl hidden in InuYasha's eye. This was found out when Sesshomaru was trying to get to his father's grave so he could retrieve the Tetsusaiga, but he couldn't because only someone who has a love of humans can wield the sword.
9. Which one of these characteristics do Kagome's friends not use to describe InuYasha?

When Kagome brings them food from back home Shippo calls it ninja food. Shippo states this a couple of times in the show.
11. What does Miroku ask every pretty lady he sees?


Answer: "Will you bear my child?"

Miroku always asks if they will bear his child and then Sango bangs him on the head with her Hiraikotsu. Miroku also has a problem with stroking women's bottoms, but Sango slaps him and leaves a nice red spot on his face when he does.
12. What is the name of Sango's demon?

Kirara is the demon that Sango rides. It is like a cat with two tails and it transforms into a giant saber-tooth-type demon that flies. She got Kirara when she was a kid. She takes good care of her and they have a strong friendship.
13. What does Kagome make InuYasha wear when he goes out in public?

Kagome makes InuYasha wear a hat so that no one can see that he has dog ears. This is because she doesn't want anyone to know he is not from her time (a demon).
14. Who created the Tetsusaiga?


Answer: The night of the new moon

InuYasha transforms into a human on the night of the new moon. This is the night he loses all demonic power and cannot use the Tetsusaiga. On this night InuYasha and the others try to lay low and stay out of trouble so InuYasha and anyone else don't get harmed.
Source: Author sean_paul

This quiz was reviewed by FunTrivia editor kyleisalive before going online.
Any errors found in FunTrivia content are routinely corrected through our feedback system.
Most Recent Scores
Nov 12 2022 : mazza47: 14/15
Oct 06 2022 : Guest 104: 11/15 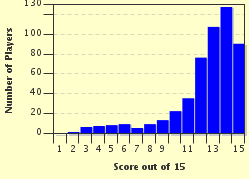 
Other Destinations
Explore Other Quizzes by sean_paul