Take when needed is the instruction given with painkillers, offered by the medical staff in charge of your treatment. Medical dramas have proved a major source of material for television. How many of these British medical dramas can you recognise?

Quiz Answer Key and Fun Facts
1. One of the earliest medical dramas on British television ran from 1957 until 1967. Set in the fictional Oxbridge General Hospital, it featured the emergencies on, and was named after, which ward number?

'Emergency - Ward 10' was originally shown under the title of 'Calling Nurse Roberts' and is considered to be one of the earliest British soap operas. It mixed stories about medical matters with stories about the personal lives of the hospital staff. Among its stars were Jill Browne as Nurse Carole Young and Desmond Carrington as Dr. Chris Anderson.
2. The daytime series 'Doctors' began on BBC television in 2000. Which actor, who made his name playing a veterinary surgeon, starred as Dr. Brendan McGuire?

'Doctors' was set in a Health Centre, and focusses on the lives of the staff and patients in well established soap opera fashion. The setting was in the English Midlands, in the town (fictional) of Letherbridge near the city (real) of Birmingham. Christopher Timothy played the head partner of the practice, and was known as 'Mac'.

He stayed with the series for six years. Timothy became known for playing James Herriot in the television series 'All Creatures Great and Small', which was based on the real life experiences of a veterinary surgeon. Peter Davison also appeared in the series, and both Ward and Alderton had played the role of Herriot on the big screen.
3. Starring Max Beesley and Patrick Baladi, a much blacker medical drama appeared on British television between 2004 and 2006. What was it called?

Max Beesley played the role of Rob Lake, who became the registrar to Patrick Baladi's character of Roger Hurley, a consultant obstetrician. Lake soon realised that Hurley was incompetent and had caused the deaths of both women and babies, as well as leaving some with permanent injuries.

The bungled operations were graphically illustrated on screen. The series focused on the difficulties faced by a junior doctor when realising that his senior consultant was negligent, and the way that doctors 'closed ranks' in these circumstances.
4. 'The District Nurse' starred Nerys Hughes in the title role. In which region of the UK was the series set?

Nerys Hughes played the role of Megan Roberts, and the character's name rather gives away the area in which the programme was set. The series was set in the late 1920s in a mining village in the Welsh valleys. It ran for three series from 1984 until 1987 and was written by Julia Smith and Tony Holland, who went on to write 'EastEnders'. Nerys Hughes also appeared in 'The Liver Birds', playing Sandra with Polly James as Beryl.
5. 'Casualty' has been running regularly on British television since 1986. Derek Thompson appeared in the first, and many subsequent episodes, playing which role?

Charlie Fairhead is a Senior Charge Nurse and has been the most regular character in the series. He appeared in every series between 1986 until 2004, again from 2005 until 2007 and returned yet again in 2008. Charlie is the central character who holds the casualty department together, and has suffered many traumas through his time, including being shot, injured in a road accident and a heart attack. Derek Thompson has played the role throughout, and has also made appearances on the big screen in 'The Long Good Friday' (1980) and 'Wild Geese II' (1985).
6. First broadcast in March 2011, the television series 'Monroe' starred which actor in the title role?

Nesbitt played the role of Gabriel Monroe, a neurosurgeon. His character is flawed, and something of a maverick, willing to take risks which his colleagues feel are unjustified. Monroe has an ongoing feud with another consultant, Jenny Bremner, played by Sarah Parish, who has been dating Monroe's anaesthetist, Lawrence Shepherd (Tom Riley).

The first series ran for six episodes from March 2011 and a second series was commissioned in July 2011. James Nesbitt also starred in the television series 'Cold Feet', which also featured the other actors given as options in the answers.
7. The television series 'Dr. Finlay's Casebook' was based on the novel 'Country Doctor' written by which Scottish author?

Set in the fictional town of Tannochbrae in the 1920s, 'Dr. Finlay's Casebook' starred Andrew Cruickshank as Dr. Angus Cameron and Bill Simpson as Dr. Alan Finlay. Their housekeeper, Janet MacPherson, was played by Barbara Mullen. The television series appeared from 1962 until 1971 with A. J. Cronin himself being the chief writer until 1964.

He was reportedly unhappy with the later scripts as he did not want the series to drift into soap opera territory. The series was also broadcast on radio until 1978 with some of the actors continuing in their roles.
8. First appearing in 1999 as a spin-off of 'Casualty', which show is based on the wards of the same hospital?

Both 'Casualty' and 'Holby City' are set in the fictional town of Holby. Since 'Casualty' is based on the emergency department, the patients 'disappear' once treated, so 'Holby City' was devised to show what happened on the wards. Of course, the show is not limited to the medical aspects, as the personal lives of the staff are just as important in this type of drama. Among the many well known actors who have appeared on the show are Robert Powell, Patsy Kensit, Denis Lawson and Jane Asher. On rare occasions, there is a crossover on the two shows but they are generally kept separate even though supposedly set in the same hospital.
9. 'Peak Practice' began in May 1993 when it starred which actor as Dr. Jack Kerruish?

Set in a General Practitioner practice in Derbyshire, 'Peak Practice' continued until January 2002, although Whately left the series in 1995. Apart from Whately the other main stars when the series started were Amanda Burton as Dr. Beth Glover and Simon Shepherd as Dr. Will Preston. Burton also left in 1995 and Shepherd left in 1997. Kevin Whately has also appeared as Lewis in 'Morse' where he co-starred with John Thaw, before going on to play the same character in 'Lewis'. Whately appeared as Neville in 'Auf Wiedersehen, Pet' with Jimmy Nail and Tim Healy.
10. Set in the 1890s, the medical drama 'Bramwell' starred a member of which acting dynasty in the title role?

Dr. Eleanor Bramwell was played by Jemma Redgrave in the series, which ran from May 1995 until June 1998. Female doctors were unusual at the time, and Dr. Bramwell further challenges the system by opening a free hospital for the poor people of London's East End rather than charge for her expertise. Jemma Redgrave is the daughter of Corin Redgrave and the niece of Vanessa and Lynn Redgrave.

Her grandfather was Michael Redgrave. The Mills family tree includes John Mills and his daughters Hayley and Juliet.

The acting Foxes include James, Edward, Laurence and Emilia and among the Cusacks who have acted are Cyril, Sorcha and Niamh.
Source: Author rossian 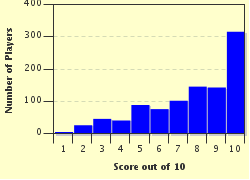 These quizzes all cover a mixture of questions about programmes seen on British television. They have a theme but cover a range of shows matching that theme.

Go to TV By Country Quizzes