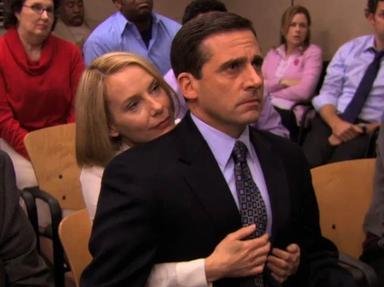 "The Office" (US) Specific Trivia Quiz

This is a quiz about "The Office" that is hard, so be cautious. These are very specific questions that are difficult to answer out of the blue.

Quiz Answer Key and Fun Facts
1. In the episode "Basketball", who does Michael say is on the team, 'of course'?


Answer: Stanley and himself

Pam says to Jim, "Oh good, I'm just in time for Ping" when coming back from Roy and Darryl leaving to go to Poor Richards.
3. Fill in the blank from the episode "Casino Night". "I wish we lived in a world where a(n) ___ joke is funny."

Michael and the workers talk about charities and which one to donate to, when Michael suggests donating to 'Afghanies with AIDS'. Phyllis says "Afghan" to correct Michael, then Michael further argues about it to which then Jim says (jokingly) "Guys! Afghanistinanies." And Michael tells him not to joke about that, and that AIDS is not funny. Immediately after that Michael has one of those 'close up talk to's in his office and one of the things he says is, "I wish we lived in a world where AIDS is funny."
4. In the episode "Gay Witch Hunt" Dwight and Michael call Jim to ask him where they can get 'gaydar'. He tells them that they can find it where?

Jim pretends to look on the Sharper Image website for Michael and Dwight and tells them that they are sold out.
5. Fill in the blank from the episode "The Job". "Once I am officially regional manager, my first order of business will be to demote Jim Halpert. So I will need a new number two. My ideal choice? Jack Bauer. But he is unavailable, fictional, and ________."

Dwight gets promoted to Regional Manager of Dunder Mifflin Scranton by Michael right before he leaves to go the the job interview in New York. Dwight later states that as the manager he will demote Jim, then find a number two, and Jack Bauer is his choice but Dwight says he is unavailable, fictional, and overqualified.
6. In the episode "Fun Run", who are the three employees that go out to eat in the middle of the run?

Darryl is never in the race and Bob Vance runs with Phyllis the entire time. Jim and Pam stop by a garage sale but never go out to eat. Andy runs behind Kevin because of his chafing nipples, and Kelly is waiting at the finish line texting. So that leaves Oscar, Stanley, and Creed; they all get picked up by a cab and go out to place that serves lunch outside, then they are dropped off at the finish line.
7. During the first weight measure in the episode "Weight Loss", the employees all step on the scale and get measured, then Michael tells Pam to get off the scale and they get measured again. With Darryl saying the weight numbers out loud, the workers all do the math in their head. What number does Kevin say that is 100 off of what Pam really weighs?

He proposes right before the final weight measure in "Weight Loss", near the end of the episode.
9. In the episode "Sabre", what original song do Andy and Erin parody to make a song for Sabre?

They parody "Party in the USA" by Miley Cyrus and incorrectly pronounce the name Sabre, ruining the entire song.
10. In the episode, "Goodbye Michael", what does Pam say Michael seems full of at the end of the episode?

Pam sees Michael one last time in the airport with both of their sound equipment off so you do not know what they say to each other. The only thing Pam says is that he doesn't seem sad, he seems full of hope.
Source: Author mawky 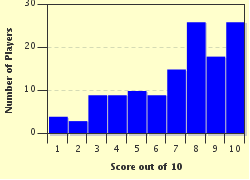 
Other Destinations
Explore Other Quizzes by mawky