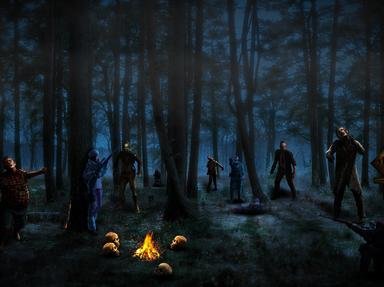 This quiz surveys one of the antagonist groups in "The Walking Dead" known simply as the Reapers.

Quiz Answer Key and Fun Facts
1. Which community, which used to be Maggie's home, do the Reapers overtake?

Maggie has never lived in the Kingdom or Oceanside. She was once abducted by the Governor and taken to Woodbury, but Woodbury was never her home and was destroyed before the Reapers ever appeared on the show. Maggie leaves the Hilltop for a time to work with Georgie building up other communities and ends up settling in Meridian, which is eventually invaded and taken over by the Reapers, who kill most of her people.

A small band survives and returns with her to the Hilltop.
2. In which season of "The Walking Dead" were the Reapers introduced?

"The Walking Dead" ended after eleven seasons. The Reapers are first introduced in season 10, episode 17, "Home Sweet Home." They are a mysterious group of hooded figures led by a man named Pope.
3. What is the last name of the only female Reaper, Leah?

Initially, many of the members of the Reapers were soldiers who fought in the war in Afghanistan, but upon returning, they struggled to find jobs and many ended up becoming mercenaries for a private military company. They were a tightly knit band even before the apocalypse.
5. Which of the following people was NOT killed by a member of the Reapers?

Jesus was killed by a Whisperer. Frost was tortured to death by Pope, the leader of the Reapers. Duncan was stabbed with multiple knives by one of the Reapers, and Cole had his throat slit by Powell, who was later killed by Daryl. Frost, Duncan, and Cole were all Maggie's men. Marco is another victim of the Reapers.
6. What is the name of the priest for the Reapers?

Played by Dikran Tulaine, Mancea is a man in his early to late sixties who goes in search of Father Gabriel. Father Gabriel spies him praying to God, but lets him live. He is first introduced in the episode "Rendition," when he chants over a fallen Reaper in tongues.
7. Who is second-in-command of the Reapers?

Beta was second in command of the Whisperers and Negan was in charge of the Saviors, while Phillip Blake was the Governor of Woodbury. Brandon Carver is played by Alex Meraz.
8. What engineer for the Reapers told Daryl, "This hwacha will make short work of those rotters"?

Anchetta is played by Dane Davenport and first appears in the season 11 "Acheron Part II" episode before being killed by Daryl Dixon with the flick of a knife in "For Blood." One or more of the Reapers appears in eleven episodes of "The Walking Dead."
9. What term do the Reapers typically use to refer to one another?

The Reapers are a cult-like group who refer to one another as "brother" (or "sister" in the case of Leah). Pope, the leader, has his own perverse version of Christianity that he follows, and one of the Reapers serves as the group's priest. Members included Ira Washington, Boone, Mancea, Ancheta, Marcus Powell, Michael Turner, and
Montanio, among others.
10. Who is the last surviving member of the Reapers?

Leah is that last human Reaper left alive, but Daryl eventually kills her in "Acts of God" when she captures Maggie. That leaves Leah's dog, named Dog, as the sole surviving member of the group. Dog returns to Daryl, who had taken care of him ever since Leah left her cabin.
Source: Author skylarb

Go to Walking Dead, The Quizzes