Logan said this to Veronica while he was in his car and she was walking beside the car.
3. Fill in the blank to this quote said by Weevil: "Sister, the only time I care what a woman has to say is when she's riding my big old hog but even then it's not so much words just a bunch of _________________, you know?"

He said this to Veronica when she told him to leave Wallace alone. When Weevil approached him about him getting down from the flagpole, when e was supposed to stay up there.
4. Who said this line "Well if it isn't Smokey the Barely Legal."

Fireman Phil said that to Veronica as she was getting the tape of some of the PCH'ers stealing beers.
5. Who said this? "Why do you insist on suppressing your hotness? The world is ready for you Veronica Mars. You don't have to blend in."

Lily said this in a flashback that Veronica was having about the day before homecoming.
6. Who did Logan Echolls say this to? "Oh, and, like you weren't working it in your shorts and your kneesocks."

Logan said this to Veronica in a flashback she was having from a limo party last homecoming.
7. "Next time, could you shoot for an actual teacher? Because this has no potential benefit to my grade point average." - Why did Veronica say this to her father?

He began dating her school counselor after a meeting at school regarding Veronica.
8. Who asked Veronica this question? "How many get-out-of-jail-free cards do you have up your sleeve, anyway?"

He asked Veronica that after she got him out of jail for (I believe) the 2nd time.
9. "Like, has he made a couple of remarks about the 29 month age difference? He has. On the other hand, he likes the fact that you carry a gun."- Who was Veronica saying this to?

Veronica said that after Leo asked if her dad liked him.
10. "I don't really have the money to hire a professional but I've noticed that you have certain...skills." Who said this to Veronica Mars?

Mr. Clemmons was asking Veronica to find Polly, the school's mascot that he thought was stolen by Pan High, but at the end of the episode Veronica reveals that it was one of Neptune's basketball players, he stole Polly to keep Wallace from playing so he could throw the game to win a bet.
Source: Author brinaboo 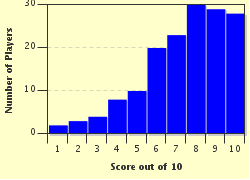 
Other Destinations
Explore Other Quizzes by brinaboo