Most of us ride in them, but how much do we know about these magnificent flying machines? So sit back, open that little bag of peanuts and enjoy your flight.

The British-built Comet was the first commercial jet airliner.
2. Which of the following does not belong?

There actually was a DC-5, although only a few were ever built. The DC-5 was a two-engine {aircraft;} the rest were four-engine planes.
3. Who was primarily responsible for the design and development of the Constellation?

Lockheed manufactured the Constellation to the specifications of Hughes for his airline, {TWA;} without Hughes one of the most successful airliners in aviation history would never have been built.
4. Which Convair model was the company's last entry in the commercial airliner market?

The 990 was a stretch version of the {880;} neither airliner had much success in a market dominated by the Boeing 707 and Douglas DC-8.
5. Which passenger plane was never used as Air Force One?

Truman used the DC-6, Eisenhower the Constellation and Kennedy the 707, the first jet-powered Air Force One.
6. For which of the following is the colloquial term "jumbo jet" often used?

The MD-82 is a successor to the old Douglas DC-9.
7. What was the designation of the four-engine jet airliner being produced by Airbus prior to the A380?

The Airbus A380 is a four-engine jumbo jet airplane.
8. Before Boeing introduced its long-haul 747-400 series, a smaller version of the 747 was built that had a range of almost 7,000 miles. What was the designation of this popular 'mini-jumbo'?

Boeing was planning to use the SB (Short Body) designation, but major customer Pan Am thought SP (Special Performance) sounded better.
9. During the 1950s turboprop aircraft made up a large portion of the commercial airliner fleet. Which of the following was not a turboprop?

Although a few Martin 404s were later retrofitted with turboprop engines, they were originally piston-driven aircraft.
10. In the romantic era of the Clippers, Pan Am bought flying boats from Martin, Sikorsky and Boeing. What was the designation of the airplane built by Boeing for service in the fabled Clipper fleet?

Although Pan Am only ever flew 28 of the Clippers, the role in aviation history of these marvelous airliners is legendary.
Source: Author TheBottleImp 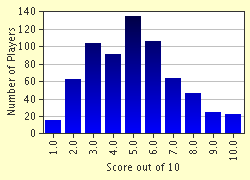 
Other Destinations
Explore Other Quizzes by TheBottleImp